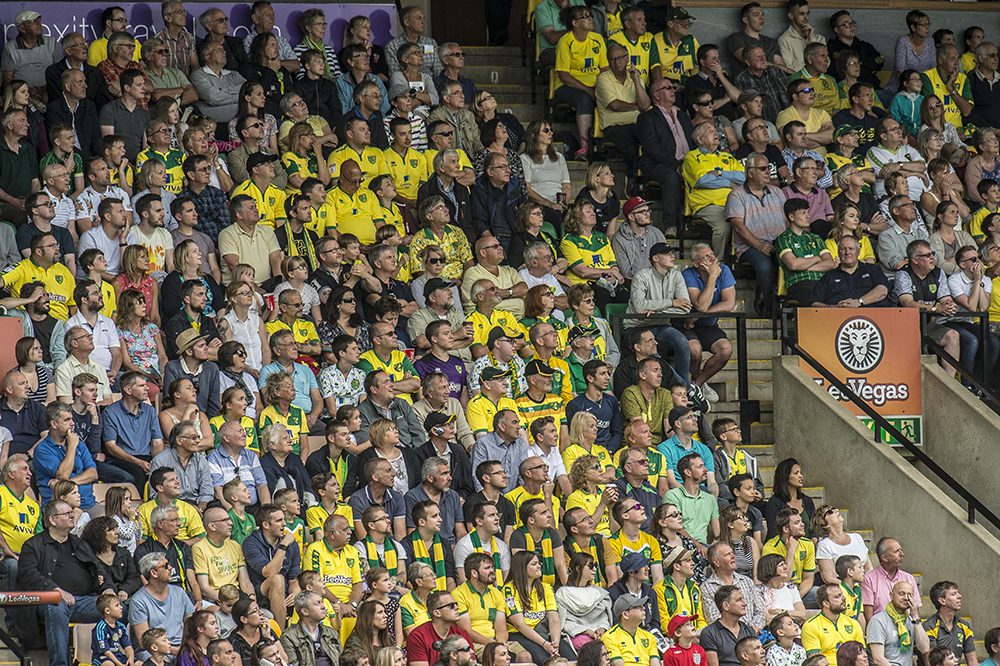 Well, that was certainly different, as we all expected it to be.

The crowd of 12,907 could easily have been 12,906 thanks to the vagaries of Vauxhall engineering.

Anyway without doing a Clarkson on engine management system “idiot lights”, I missed meeting up with my Brighton friends until after the game, and ended up “on my own” in the River End; an interesting experience, especially under the circumstances. I hadn’t been in the River End since the dark days of Robert Chase, but seemingly little has changed.

I was particularly under-impressed with the much-vaunted “enhanced security check”. Maybe I’ve got an innocent face (I haven’t – I sport a ‘number one’ cut and in a short-sleeve top I’ve got at least as many visible tattoos as Vinnie Jones in his heyday). Nobody wanted to search my bag, or anybody else’s by the look of it.

I’d just sat down when some old boy announced to all and sundry: “He’s gawn too then”.

Josh wasn’t on the team-sheet, so our sage told us he was on his way to Newcastle. Hmm. Post-match, Daniel Farke appeared to disagree.

As soon as Brighton scored, it started up good and proper. Not the return of an old failing – a cross coming in from the visitors’ right that we abjectly failed to defend – but the Russell Martin crucifixion.

I won’t dwell on the more puerile comments – nearly all from older people – but the interesting one that sparked what I would deem a proper discussion was: ‘when do you call a back line up and when do you not?’.

If the skipper plays in a back three or certainly a back-four that should nearly always be his call. Don’t forget that the players see things in real-time at ground level. Rushing out at every opportunity is not always the best solution. Anyway, that debate got us up towards half-time quite comfortably – then Marley Watkins did his thing and impressive it was.

He’d had a couple of efforts charged down previously, but that was a little bit special and will hopefully give him tremendous confidence for the “real thing”.

I honestly heard “Jacob could have done that”. You might guess who from.

I normally go the Barclay Bar at half-time – a bit impossible from the River End – but continued with the offside trap discussion in situ instead. A very polite couple were worried we didn’t have enough substitutes to fill the bench for this fixture.

Ah, well, we have Wes and Ivo Pinto in cotton wool for Fulham. We have Timm Klose and Alex Pritchard to come back in (I hope very) a few weeks. Plucs all the members of the under-23 squad. We’ve also signed the young ex-Liverpool lad Phillips on a free and maybe the Belgian striker whose name I’ve forgotten. No confirmation from the Club, so that one might have hit the buffers. I simply don’t know.

Then there is at least one Premier League centre back loan in the pipeline. The trouble is, until the Chelskis and Arsenals of this world have doled out their squad numbers and finalised their plans, even Stuart Webber won’t know who is definitely available. Somebody decent with huge potential will arrive; it’s just a question of when.

And as Webber has said, he can’t fix this in one or two windows – how could he sell Matt Jarvis, for instance? How could he even give him away? Of course he couldn’t. Steven Naismith’s wages are too vast for him to be shifted and I doubt Michael McGovern is key to our progress this season either, but unless someone comes in for him…

As for the second half against Brighton, we competed very well, Nelson whacked the post with a cracker and overall I liked what I saw. I left happy and despite a bit of a surely unintentional naughty on Harrison Reed we accumulated no further injuries. If ever a draw were a fair result it was this game.

And as for my partner’s Vauxhall dashboard resembling the Pink Floyd Light Show, my mechanic mate Andy says leave it like it. If they’re made between 2008 and 2011, apparently even Vauxhall can’t put the lights out.

Brief postscript: in my newspaper this morning ex-Boro manager Aitor Karanka made his predictions for the season, and said we would finish seventh – at worst. But this is what he said about Cameron Jerome:

‘He has good experience, he is a good professional and a good man.’

Now that’s three good reasons to retain him. One for every £1 million Fulham or whoever is allegedly offering.

Rest assured all Burnley fans will be behind this #NCFC #twitterclarets