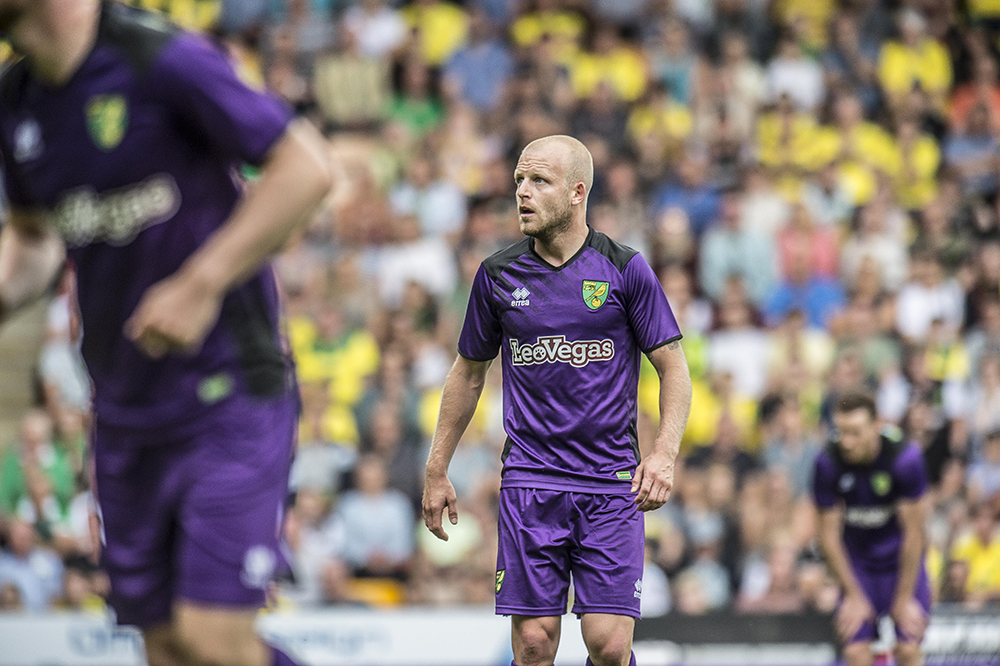 As Chris Martin and Coldplay once sung on the turn of the millennium, it was all Yellow.

They were right: for City fans, things were – Bryan Hamilton’s side had just achieved an underwhelming twelfth place finish in the old First Division in a season characterised by Matt Jackson’s leadership, Darrell Russel’s midfield tenacity and that aesthetic Colman’s home strip.

Simultaneously, an equally attractive green away shirt was donned by City on the road, complying with contemporary kit-related expectations and currently being sold on websites such as eBay and ‘classicfootballshirts.co.uk’.

Seventeen turbulent years on, and things have changed. Orthodox convention concerning home and away strips has been relinquished to make way for more innovative and provocative designs, providing a platform for modern day Errea employees to harness their creative instincts and produce strips like the latest in the line of the recent City collection.

Like all things in 2017, such a profound transition has only served to divide opinion.

The advent of the third strip is an overtly modern phenomenon. The days of two rudimentary kits to be worn for multiple consecutive seasons are behind us, being replaced by a more annual change of garments that is now accompanied by the curious addition of yet another shirt.

In 2015, that shirt was adorned by a lurid synthesis of randomly selected hoops. A year on, Errea’s awareness of City’s past and that iconic ‘bird-poo’ strip that Jeremy Goss wore in Munich was appropriated in order to create a similarly vibrant design that was worn for less inspiring away trips to Burton Albion.

2017, however, has witnessed the emergence of a fundamentally new colour that the more conservative fans amongst us may have met with some degree of hesitance or even repulsion.

Purple. Yes, purple. Once again, our Italian kit-makers have provided us with a kit of conspicuous boldness, vividity and radiance; pleasing some fans yet being met with fervent resentment by others.

At £48 – excluding the price of additional printing – the new third strip does not come cheap, a figure that will nevertheless fail to prevent the more courageous amongst us heading out to either Chapelfield or the Mall to purchase what is an unequivocally original design.

For those that possess such commitment, I salute you.

My thoughts? It’s with some regret that what I initially found somewhat repugnant is now something that I have found to inexorably grow on me. While the new strip may only be worn on two or three away outings at the likes of Molineux and the Pirelli, its garish colour and – kudos to those observant fans who noted this – subtle tribute to the famous ASICS kit of 1989 have been attributes I have gradually begun to appreciate.

However, such thoughts will only be reinforced should the players wearing it perform to the best of their abilities.

The much publicised kit releases of recent weeks have served a further purpose however. While I am no longer one to purchase our most recent strips – I haven’t bought a City shirt of that current season since the luminous Championship-promotion strip of 2010/11 – the announcements throughout the summer have provoked thoughts concerning my favourite strips of modern City history.

Such a sense of nostalgia has only had the subsequent impact of augmenting the amount of time spent procrastinating on eBay, seeking to enhance my City wardrobe further with retro kits from the last couple of decades.

Throughout the last year, investment has been made on the homes shirts of 2002/3 and 2003/4, training shirts of 1996/7 and 2000/01 and even on the more eye-dazzling goalkeeper shirt of 1994/5, a strip that contains a considerable spectrum of colours and one that remains popular with fellow fans at away games.

The Digital Phone kits of the early 2000s and the Norwich and Peterborough strips of the 1990s will always remain favourites of mine despite their existence outdating my City-supporting life, while I am similarly appreciative of the Foster’s Lager shirt of 1986-89 and the range of Colman’s Mustard shirts that emerged towards the century.

The beauty of some of the strips shall never be witnessed at Carrow Road again.

Shirts will always divide opinion. One thing I always enjoy about watching City on the road is meeting fellow fans, speaking to them about the game while simultaneously keeping an eye out for their chosen outfit. Some are new, some are old. Some are yellow, some are not. Some I like, some I deplore.

Regardless, the world of collecting City kits is one of complexity and fascination, a world I plan to continue exploring as new strips of bygone eras continue to become available.

But back to the purple. It’s brash. It’s bold. It’s glaring. Such a kit appears to send out some form of statement, a message of power and authority that seems to foreshadow a period of glory for our club.

Historically, successful teams have often worn garish colours: think the red of Manchester United and Ferrari, the yellow of the Australian cricket team, the famous fusion of green, red and white that has been associated with the brilliant Leicester Tigers for so long.

At the end of the day, however, kits do not matter. It’s performances that count.

As I travelled to Craven Cottage on Saturday, my thoughts turned to Coldplay again and another one of their songs that could prove to be pertinent to City’s impending campaign.

Spurred on by the 3000 plus travelling support in the Putney End, Daniel Farke’s Norwich City, despite the early setback, made us proud. And, who knows, perhaps they can send us all into our own form of collective, jubilant, footballing Paradise.

Rest assured all Burnley fans will be behind this #NCFC #twitterclarets