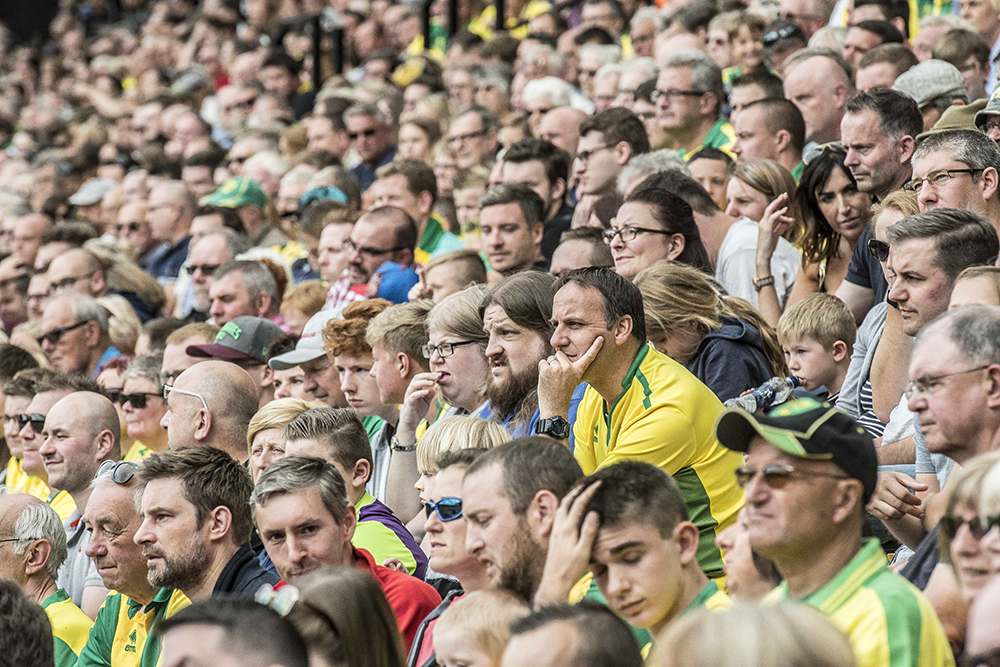 Those of a similar vintage may have shared the childish glee I used to find whilst watching the TV quiz show Blockbusters and hearing a contestant utter the phrase “I’ll have a ‘P’ please Bob”.

Let me play the role of Mr Holness and ask you “what P is most needed at Norwich City right now”?

‘Probably’ all of them – and as the season progresses we’ll see the influence that each exerts on the others and whether they all combine to deliver the ultimate ‘P’ – promotion.

Will Farke’s possession-based Plan A deliver the results and points needed to challenge at the top of the table?

Will the attempts to lift the atmosphere translate to positive performances on the pitch?

Are City fans blessed with the patience to accept anything more than the occasional hiccup and accept that we’re a ‘work in progress’ without demanding a change in approach – or personnel?

It was on 65 minutes and 47 seconds of the opening home match that I heard the first public utterance of displeasure as yet another sideways pass was played across our back three.

Despite enjoying over 70% possession, City had failed to test the Sunderland keeper and trailing 2-0, the frustration began to surface.

Farke’s tactics require patience from the players to retain the ball and work the opposition but against Sunderland they began to test that of the fans due to the lack of incision and an inability to break past or through the Black Cats’ defence.

A possession-based game-plan is meant to provide a platform from which to probe the opponents’ defence and relies on the play-makers finding the right moment to make the ‘killer pass’ to match the forwards’ movement – as they’ve done to good effect against both Fulham and QPR.

When it works and when the team is winning, we’ll revel in it and you suspect there will a few occasions where each sideways pass will be greeted with a chorus of “olé”.  However when we’re chasing a game and both the situation and the supporters demand greater urgency, our almost metronomic style which seems to prevent a ‘shift up in gear’ has the potential to cause unrest.

So what of the calls for positivity? Some may be aware of the attempts to rally the supporters before the recent home games. Prior to kick-off the fans have been in good voice. Whether that’s as a result of the pre-match activity or simply a reflection of a home crowd starved of football throughout the summer and full of hope and expectation is a moot point.

Taken at face value, the aspiration of those organising and participating in anything that creates a better atmosphere has to be a positive thing.

The relationship between performance and atmosphere is clear and the debate often centres on whether it’s the players’ responsibility to lift the crowd or vice versa.

Either way, nothing bursts our collective bubble quicker than an away goal against the run of play; especially when that set-back doesn’t illicit an obvious or immediate response on the pitch.

It’s encouraging that the players and coaching staff have faith in the system, rather than scrapping the plan at the first hurdle. But it’s results that will dictate whether the fans truly buy in to it as well. Confidence that it’s a game plan worth sticking with; that the passing and possession statistics deliver the only figures really worth worrying about – points on the board.

The man who jeered the square pass from Franke to Zimmerman in the 66th minute of the Sunderland match is a season ticket holder who is entering his 45th consecutive year at Carrow Road.

I know that, because he’s my dad.

He’s not untypical of those of us who have our season tickets in the Upper Barclay; more than happy to join in with a chorus of ‘On the Ball City’ but someone who values the comfort of sitting through 90 minutes and not shy to express his dissatisfaction.

Fortunately (or unfortunately depending on your view) he’s immune to the online debates that take place about the need for patience or the rallying cries made by those looking to generate a better atmosphere.

He doesn’t use Twitter and he doesn’t read fan sites (not even MyFootballWriter – unless prompted) so he’s unaware of the call to arms or the view that those who frequent the Barclay have a duty to ‘sing their hearts out for the lads’.

He supports the club in his own way. He moans when he doesn’t like what he sees and he sings loud and proud when we’re playing well. After 45 years, I figure he’s earned the right to do so.

Social media provides a strange little microcosm of activity, especially when it comes to Norwich City. It’s all too easy for those of us who gain a few retweets here and there or get an article ‘published’ online to assume that our views are somehow validated and reflective of the masses.

It’s an online community for the vocal where dissenting opinions can be muted or blocked until we’ve tailored our timelines to our liking and to our way of thinking and thus cajole ourselves into the impression that the Yellow Army all think as one.

But truth be told, the club is supported by many different people in many different ways; the common ground being a love of Norwich City and a heart-felt desire for the club to succeed.

At half-time against QPR, I had my customary second-half ‘loosener’ and listened to snippets of conversation in the bar. I wouldn’t be so arrogant to suggest that the majority of views I heard were ‘misinformed’; merely that they differed from my own.

However, amongst them I overheard the following;

“Yeah, but get a goal and this old place will be rocking”.

And so it transpired.

Patient possession delivered the points and a whole heap of positivity.