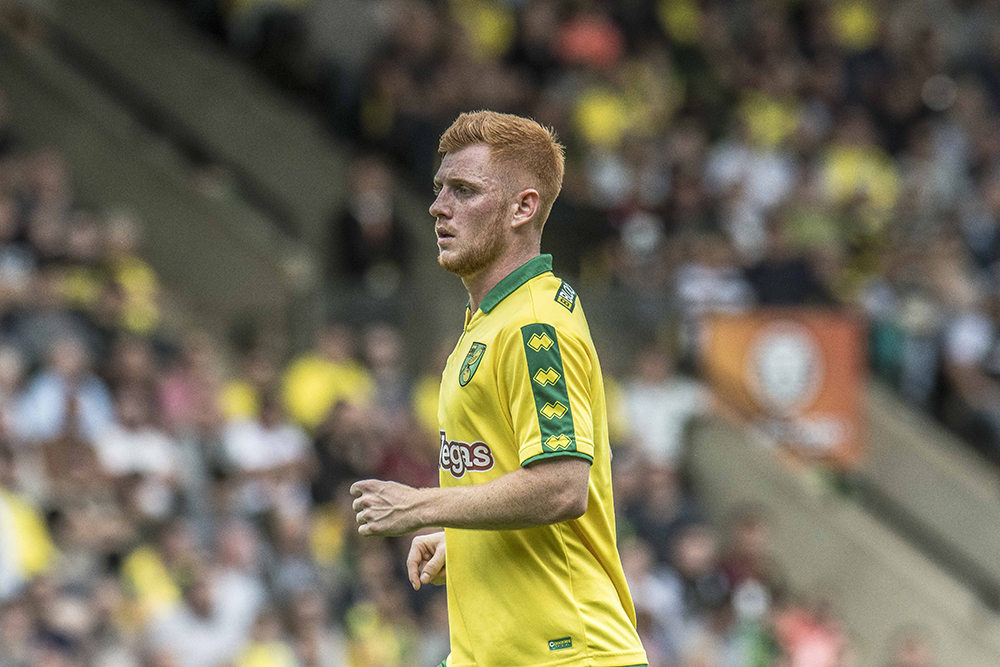 If the overriding emotion at 3:30pm on Sunday was frustration, then last night’s equivalent was relief.

Of course there was no little joy to be had – and the old place rocked at times last night – but Daniel Farke’s first Championship victory also signalled a collective ‘Phew! Now we can get on with it’.

That his first win arrived by virtue of grit and determination rather than ninety minutes of aesthetically pleasing, patient, passing football was no bad thing and will serve as a timely reminder to Team Farke that the Championship is no respecter of philosophies.

Instead it was the team’s ability to dig deep when the going was tough and ride out the spells of pressure that laid the foundations for the technicians to finally win the day for City. 71 per cent of possession counted for diddly squat on Sunday and while the intention would have been to dominate it to a similar degree last night, the fact they didn’t and still found a way to win was noteworthy.

And it was tough going at times – no question. Despite one or two spells of City pressure in the opening 45 it lacked fluidity and rhythm and it was Holloway’s QPR who were asking the questions, and who looked like a side with cohesion and confidence.

But in those key moments they didn’t concede. Angus stood firm when Mackie stung his palms; Zimmermann and Franke too were unbowed by the constant movement and harrying of Mackie and his partner-in-crime, Washington. When row Z was needed row Z was found.

Pinto added energy and thrust, and Husband looked like a man finally more at home in his surroundings. The ghosts of Grabban and Vaughan were being laid to rest.

It didn’t flow and Holloway’s men denied City the opportunity to work it methodically and patiently through the thirds but it was without peril and the base was solid.

That the opener took just three second half minutes to arrive was huge. The anxiety that would have built and built as those minutes ticked away dissipated in an instant and no longer was the task of the uphill variety. A team designed to keep the ball in the way City intend are not natural ‘chasers’ of a game. But give them a lead to protect and those pretty patterns have a purpose.

The second goal could have settled a lot of nerves if it had presented itself before 82 minutes but when it did it felt game over. And such had been the resilience from a much-improved defence, for once it didn’t feel as if we were constantly on the cusp of conceding and having to brace ourselves for a fraught finale.

And ironically, whether intended or otherwise, the defence standing firm while under QPR pressure gave City the chance to counter – a rarity under the new regime – and the quality of Maddison, Vrancic and Hoolahan was able to shine through as the Rs chased the game.

Both goals were out of the top drawer and Vrancic’s pass to allow Oliveira the chance to strike it first time without checking his stride was a thing a beauty; so too the calm finish. And to watch Harrison Reed bludgeon his first professional goal in from 25 yards was a special moment not just for the lad himself . And it was fitting because, again, he’d been excellent.

So, we’re finally up and running. New faces who had question marks next to them are starting to find their feet and show their quality, and the Canary world this morning feels just that little bit calmer.

Now for a lie down.

That Sargent miss looks worse every time you see it, which is a shame because he played well #ncfc

Don't know why BBC persist with woman commentators, there's no excitement in their voices, they sound like a 12yr kid. Boo to the BBC #ncfc

Norwich City will probably take the point and the clean sheet today but it should have been all three! Everyone will talk about Josh #Sargent's miss but Teemu #Pukki missed a couple of glaring chances too! #NCFC #BHAFC #MOTD.