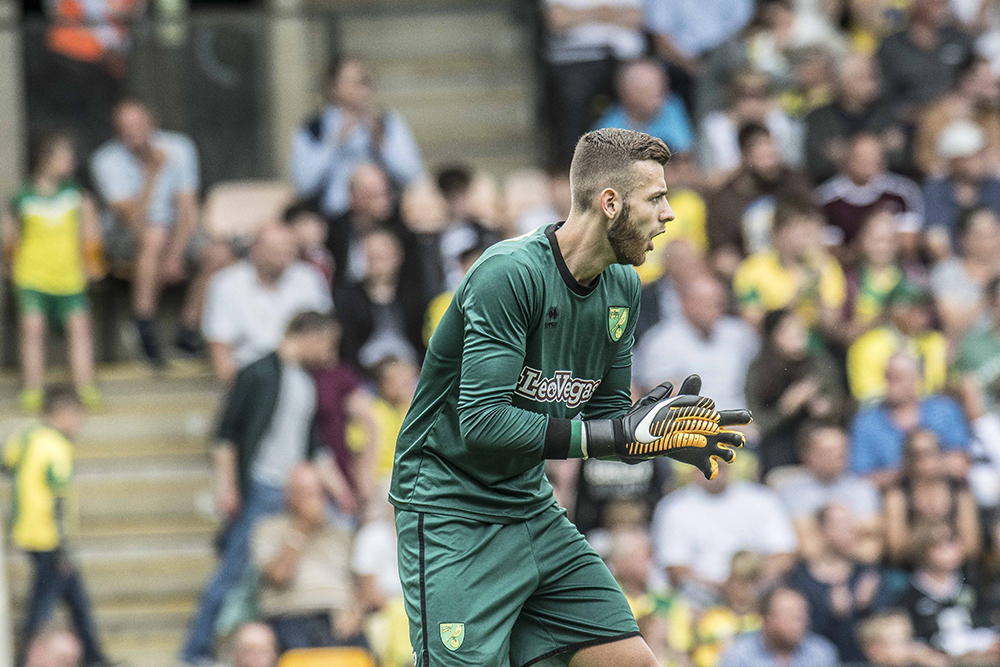 Well, I thoroughly enjoyed last night – a well-marshalled defence in which Christoph Zimmermann was outstanding, the artistry of Wessi and James Maddison, a fantastic save by Angus Gunn from the irritant that is Jamie Mackie…

…and the best atmosphere I can remember at The Carra in a long time.

There was a superb pass from Mario Vrancic to Nelson Oliveira for a cool, composed finish, followed by a late wonderstrike from my personal man-of-the-match Harrison Reed which did indeed make QPR collapse like Ian Holloway’s deflating “bouncy castle”.

Ian Holloway. Now there’s an enigma. With thanks to www.westlondonsport.com whose quotes I am shamelessly robbing, this is what he unbelievably said after the game:

He said he was unable to establish the nature of the injury to Pawel Wszolek. The Pole went off during the first half and Holloway revealed the language barrier meant he was in the dark over what the problem was:

“It’s the weirdest thing. I don’t know, I’ve got to be honest.

“We were trying to get it out of him (what the injury was). We even asked his Polish friend (Ariel Borysiuk) and I don’t think he wanted to come off.

“In the end, someone walked past him in our box so I had to take him off.

“He was saying he wanted to stay on but it’s not about him wanting to stay on, it’s about him being injured.

“He was apparently shouting in Polish that he was alright. But if you’re injured you can’t stay on.

“God knows what it is. I’m struggling to get it out of him. I’ll probably find out more on the coach home.”

Now I’ve heard some things in my time, but that is not something that should ever, ever happen.

City, along with most Premiership and Championship Clubs, have a truly international brigade.

Several Germans (of course), a Swiss, a Norwegian-Ghanaian, a brace of Portugeezers, a Croatian-Serb, a Northern Irishman, a southern Irishman, a Welshman, a couple of Scots, an under-23 squad from all destinations and a few Englishmen – even one from Downham Market (there were once two, as we all know).

But would any language barrier be a problem over an injury? The heck it would.

When Dani Ayala signed for us, one of the first things he did was to go into a local school and help to teach children the rudiments of basic Spanish. This also helped Dani improve his already good English. An NCFC win-win situation. Back in the day, Cedric Anselin was very happy to adopt the same approach with French.

I cannot believe a professional football club would ever put itself in the position of not being able to communicate with one of its own players. It’s not as if there aren’t any Polish folks around who would happily oblige with interpretation. My City next door neighbour Zoltan is Hungarian and apparently speaks excellent Polish (how would I know?), and might be open to earning a few bob, Mr Holloway.

I slightly disagree with Gary’s article in that I don’t think Rangers were quite as dangerous as he reckoned. However, the scrapping for loose balls and the new-found resilience at the back has encouraged me no end. The way we mixed it up at times (with no rollockings from Daniel Farke for doing so) was excellent.

And the Parklife chant has evolved into something exquisite.

Everybody watched that match with a great big smile on their face from beginning to end.

Except Ian Holloway and his staff who were effectively impersonating Manuel in Fawlty Towers. Que?

Quality at your job fella, #Ncfc are lucky to have you 💪🏼

thank God the greed got the better of him - now there won't be a media circus for Cardiff vs #NCFC.