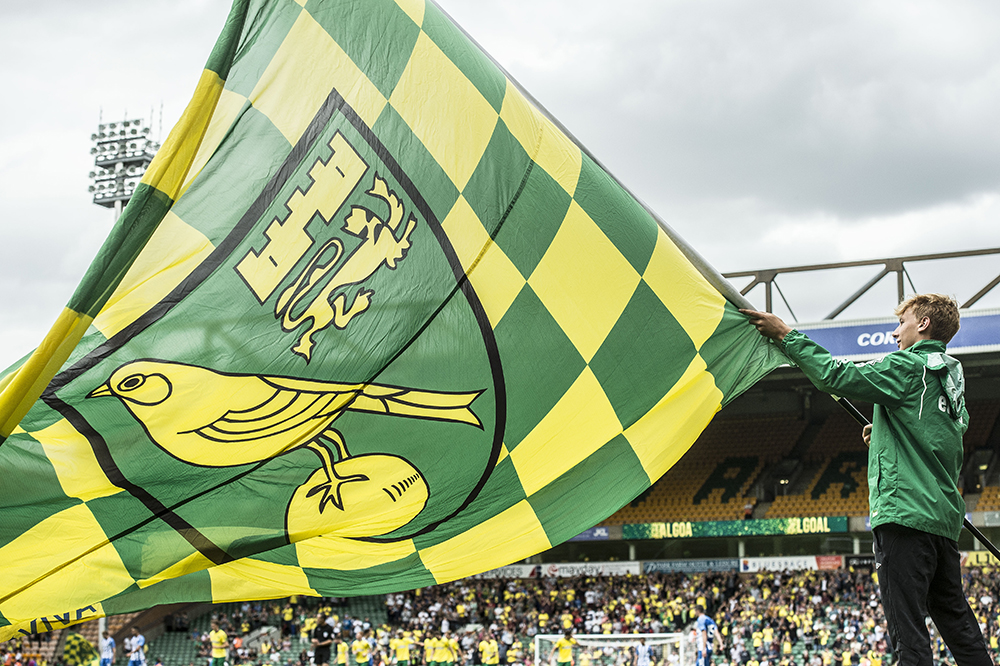 When it comes to cup games – especially early stages of the League Cup – I tend to give them a swerve. Not sure if that brackets me a glory hunter – but I felt owed it to John Salako to make last night an exception.

And as is my wont when I do make the effort for a cup game, I depart from my River End home and take it all in from a different Carrow Road perspective. Last night it was the County Lounge in the City Stand; an experience that took me way beyond my Regency Security blanket.

There are padded seats for starters and, get this, free Wi-Fi. Unfortunately for the locals, the free tea and coffee that’s on offer at league games came as a cost last night, much to the very polite chagrin of some, but in fairness to the club you don’t want to be dishing out too many freebies to oiks like me who have gatecrashed for a tenner.

But, the perks of the County Lounge aside, what a different viewpoint does is literally offer a different perspective and regardless of the paucity of quality for spells of the first half it did make for an enjoyable 90 plus minutes; not least because I was sat next to a large, genial and knowledgeable Scotsman called Jim (who is no lover of a certain blond fellow Scot in the centre of the City midfield).

As ever, the purpose of the exercise is to be in the hat (for a draw that’s taking place in the middle of the night on the other side of the world) and on that score it was obviously job done, even if it did take an ardous, very Norwich City-type route to get there.

The concern of course remains the struggle for clean sheets and almost irrespective of the permutation of the back four we continue to struggle to look and feel solid. And that in all bar one game we’ve fallen behind is an unhealthy trend that simply has to be fixed.

At the risk of sounding like a broken record (don’t say it…) the Farke way of playing doesn’t necessarily lend itself to chasing games and is far more suited to getting a lead and then using possession of the ball as a form of defence. The patient, methodical build-up relies on it eventually creating an opening; something that is tough when up against a side who have something to hang on to and can afford sit tight and use numbers to plug the gaps.

And while on the subject, another flaw – perhaps not the right word – or hurdle (that’s better) is that the possession-based, methodical passing style does permit the opposition the opportunity, if they so chose, to defend high. Almost as high as they like in fact.

Rarely do we now look to hit the channels and so even defenders with the pace of John Terry can push their back four high knowing there is only a limited threat in behind.

But, and fortunately there is a but, there is where the re-emergence of Josh Murphy will hopefully come into its own. By all accounts he was the one shining light at Villa Park on Saturday and, despite Wes getting the sponsors’ Man of the Match nod, he was again last night.

I’ve questioned in the past the Murphys’ ability to mix it and their decision making – and been lambasted for it – but this new version of Josh looks a slightly different animal. No longer in direct but friendly competition with his brother, there is a swagger, confidence and, importantly, a grit on display as we watch him emerge from the shadow cast by Jacob last season.

And it’s exciting. Faced one-on-one with a dithering right-back, Josh has always had the knack of dropping the shoulder and zipping past as if there was no-one there, but couple that with a previously unearthed steely desire and he promises to be more of a threat more of the time. And gives Daniel Farke another nuance to his otherwise methodical attacking thrust.

Watching his brother get his dream move and possibly feeling a little left behind could be to Norwich City’s advantage over the next nine months.

Elsewhere, once the opening defensive horror show was out of the system, things did improve and even though the first half was of the stop-start variety no-one could argue against City deserving to go in at half-time level – the cross by Pinto and the header down by Watkins both deserving of Josh’s thumping finish.

The second half was effectively decided by Josh’s second – although no-one in Team Farke will need reminding of the free header missed by Josh Magennis in the second-half or, in fact, the sitter missed at the back end of the first.

But the quality did eventually shine through and goals from Marley Watkins – a timely filip to one who worked tirelessly without too much joy in the lone striker role – and Tom Trybull did pit a nice gloss on something that began a bit of a struggle.

Trybull’s cameo was particularly mouth watering – all 15 minutes of it – and the howitzer goal aside he looked a player with a touch of class; comfortable in possession and with the ability to pick and deliver a pass.

Food for though for the manager too was Marco Stiepermann’s evening at an unfamiliar left-back. A few errors aside – not unusual when playing in a new position – he linked up well with Josh and offered some attacking thrust. With James Husband finding life tough, Saturday’s starting XI may offer a few surprises.

So… a Carabao cup runs beckons, depending on what John Salako comes up with. Vitesse Arnhem away perhaps?