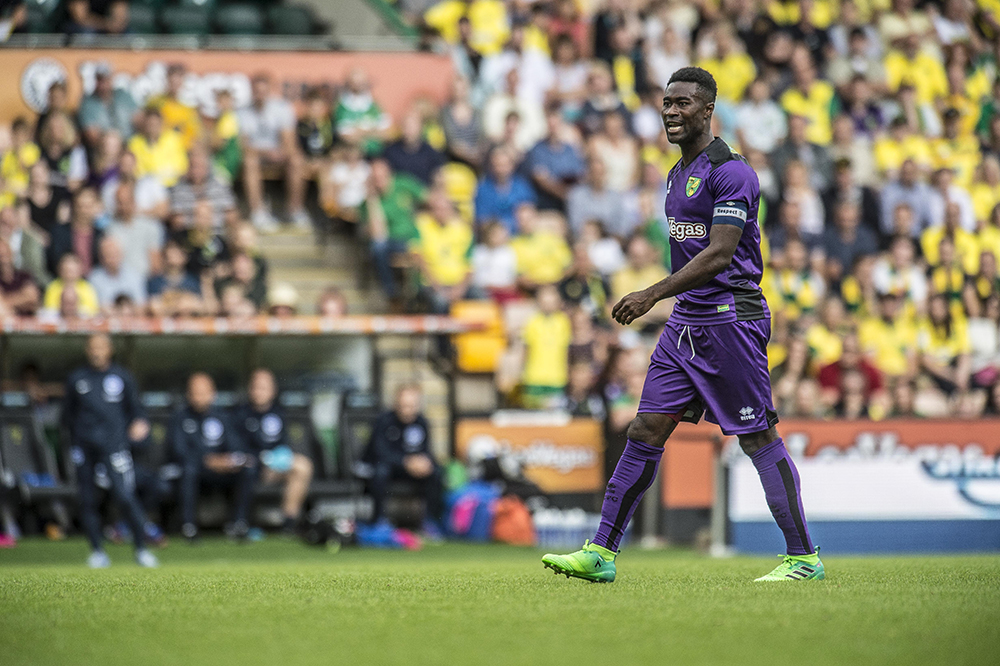 It’s guest blog time, and today it’s the turn of another member of the MFW academy. Welcome aboard Daniel DeFalco…

With the inclusion of both Alex Tettey and Tom Trybull against Birmingham, it’s fair to say that the Canaries looked far more solid in the centre of the park, as well as in defence.

Was this emphasised by the atrocities we saw at Millwall a couple of weeks previous? Possibly. However, there’s no getting away from the fact, whether you like him or not, that the loveable Norwegian can still bring something to a new look possession orientated City side.

As the Farke era began to gather steam throughout pre-season it was clear that the ex-Borussia Dortmund II manager wanted his team to keep hold of the ball and in his own words, “be the protagonist” of the game. To be fair to Farke, he kept to his word and we saw dominating performances in the majority of friendly games.

At this point in proceedings I, for one, dismissed the notion of Tettey even getting on the pitch this season, let alone starting a game. As for Trybull, I got the impression he was going to be a seldom used squad player, who would only really don the yellow and green for cup games.

Then came the start of the season. Despite good results against Fulham on the opening day and QPR three games in, both the midfield and defensive areas looked shaky at best. The defence, albeit without the talismanic Timm Klose, showed all the worrying hallmarks of last season. But one weakness that occurred in the opening month of the season, and one that Alex Neil and Alan Irvine’s men did not display much of last season, was midfield frailty.

The experienced combination of Jonny Howson and Alex Tettey was an area of the pitch that remained relatively settled throughout both managers’ tenures.

The lack of bite in the City midfield was encapsulated at The Den, where the side’s soft defensive unit was left exposed on countless occasions. Even Southampton loanee Harrison Reed, who had been hailed by fans as ‘The New Paul Scholes’ a couple of weeks beforehand, also looked off the pace.

The two-week international break after the Millwall game left both the Canaries boss and disgruntled fans alike wondering where to go next, not to mention the considerable personnel changes that would have to be made against Birmingham.

Changes were what we wanted and changes are what we got, most notably a 4-2-3-1 – the shape Alex Neil favoured throughout the majority of last season – with the Tettey/Trybull combo at its base.

And it worked quite nicely.

The duo complemented each other very well, Trybull retaining possession confidently while Tettey did what he does best and broke up a number of Birmingham attacks.

If there was any doubt lingering amongst fans that Daniel Farke is afraid to change things, then the change of formation and the fresh duo in the centre of the park certainly quashed these doubts.

Let’s not forget, the Birmingham game was Trybull’s first taste of Championship football. To throw him in from the start alongside a player who has also been short of league minutes this season was a huge risk on Farke’s part, especially in such a vital match and in the place of the highly rated Harrison Reed.

For me, the two midfield changes also show how Farke is adapting to coaching a side in the Championship – a league which differs greatly to the Regionalliga West, the German’s previous division.

Now I don’t like to get too bogged down in the world of tactics, but it’s pleasing to see how Farke has recognised that the Championship is a different animal to German football. You won’t need me to tell you that the league is more about winning individual battles and defending strongly as a unit, opposed to the neat possession football of the German leagues.

We all know Tettey isn’t the type of player to be spraying 60-yard passes across the pitch, or spraying many passes anywhere for that matter, but what the experienced Norwegian does do, he does very well.

Other City players have gone on record of saying that Tettey is a vital component of the team, often gone unnoticed by fans. If you look at the top teams across Europe, they all have players in their ranks who can break up the opposition’s attacks, then give the ball to someone with more technical ability. Casemiro for Real Madrid, Busquets for Barcelona and Kante for Chelsea just to name a few.

While the possible future midfield partnership of Tettey and Trybull may not give the Carrow Road faithful too much to shout about, they certainly provide what is still a very embryonic City team with some much-needed steel.

Keep the faith and enjoy the ride.