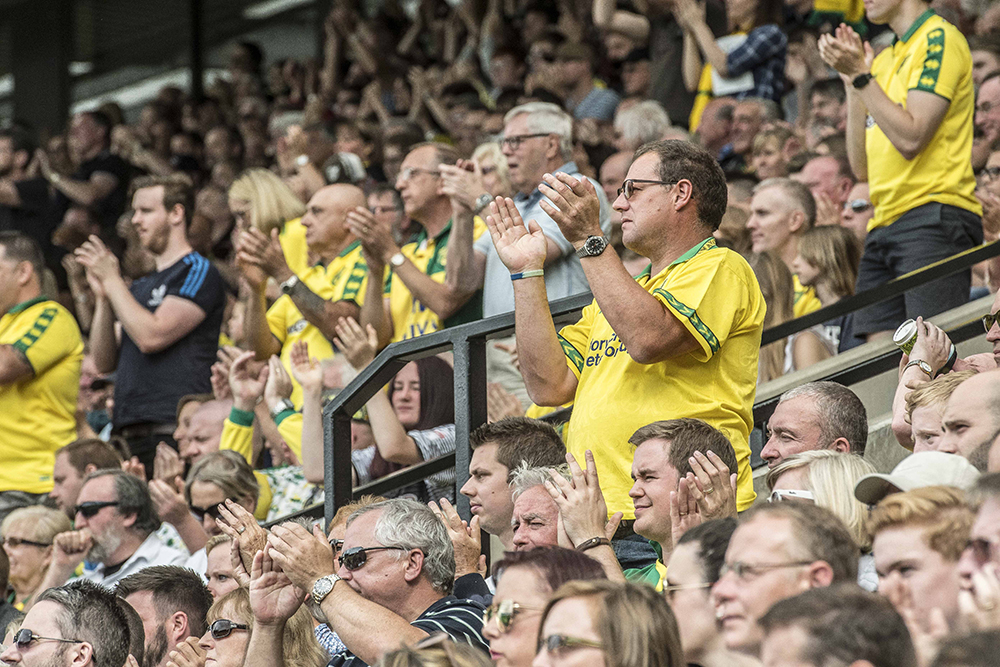 “It’s important that I’m a leader on the pitch and a strong person for the young lads. I need to bring the fighting spirit out of them.” Timm Klose.

Well Timm,  you made a fair old fist of that on Saturday and it was terrific to welcome you back. And talking of parts of the hand, that thumbs-up you gave Christoph Zimmermann for his superb double block during the second half as Birmingham attempted to up the ante was proof that you have the qualities.

Zimmermann looked so much more composed alongside Klose. Coincidence? Not through these eyes.

It might be a cliche, but we defended as a team, right from the admirable Nelson up top through to Angus Gunn.

The shielding of Alex Tettey (if he wants out, he sure didn’t play like it) and Tom Trybull (apparently pronounced troobul according to a guy I know who speaks German) really came into its own when we were put under pressure, particularly later in the game. Tettey’s very presence appeared to unsettle the Bluenoses, who barely mustered a shot in open play. And of course, he proved he’s as consistent as ever by attracting the inevitable booking (and hoofing one into Row Z in the Barclay – Ed).

On the subject of bookings – and not because of the fact that we won and I’m wearing the old rose tints – it’s the first time I have ever seen referee Simon Hooper have a decent game. Fair play to him, for once.

Ivo Pinto was made captain for the day and he declared his pride on social media. So that’s another leader to go along with Timm.

Now it’s time to tread on eggshells. I have never, ever been a “Russ-basher” but I really believe he will now only be a squad player. After that performance from Klose and Zimmermann and with Grant Hanley and Marcel Franke hovering in the wings I feel his days as a Norwich City centre back are well and truly over, barring catastrophic injuries. I doubt he’d even get into a first-choice back three.

Ivo Pinto has surely nailed the right back spot for himself; so again, Russ would have to rely on an unwanted injury to get into the starting side. Unpalatable to some maybe, but that’s my honest opinion.

And what of Steven Naismith? Like Martin, he didn’t make the match day squad. The irony of him being reputedly our highest-paid player and not even featuring on the bench isn’t lost on me, but did we miss him? Not really.

It shouldn’t be necessary to go with the Tettey-Trybull/Harrison Reed axis against more ball-playing sides, but it’s nice to know it’s available if we need it. And let’s be honest, nobody knew what to expect from Birmingham, let alone how they would be set up. I guess that’s why Daniel Farke took out an insurance policy by playing two defensive mids.

Wes got a rest following his exertions for the Republic, although I would expect him to feature against Burton, and Josh Murphy looked as sharp as a tack. Two more plus points.

And the crowd were great. Of course, scoring that early is a terrific way to get us all onside – but the atmosphere was fantastic. I’d go as far as to say it was better than against QPR and if there were any moans they were out of my earshot.

So we have an elected leader in Ivo Pinto and a committed leader in Klose, plus our leader isn’t afraid to ring the changes in terms of team selection.

The leaders many of us crave (even before Hanley has started a game) are definitely beginning to emerge.

Three more points against Burton and we really will be up and running.

Tickets available on the gate and if you are quick the FREE coach travel still available from @canariestrust @AlongComeNodge its going to be a good one! #ncfc #FACup #womensfacup @VitalityWFACup

Viewers in hysterics as Mike Dean sings his own retirement song in a chicken shop - https://fanbanter.co.uk/viewers-in-hysterics-as-mike-dean-goes-viral-singing-his-own-retirement-song-in-a-chicken-shop/

Just remembered a dream I had last night. #ncfc were losing 3-2 at home to Leeds and equalised in 124th minute!!! Think I’ve been watching too much World Cup

Plenty of content coming your way across the festive period.