Dave Bowers (Dave B to regular readers of this site) has again offered us an intriguing insight into the Farke era based on his statistical comparison with the previous eras of Lambert, Adams and Neil. Take it away Dave…

With the international break coming to a close, now is a good time to reflect upon the season so far. Building on my summertime review of the previous three Championship seasons, I have updated all the charts to include 2017/2018. So here we go…

So far this season we have:

Warning about the data

Before we go further here’s my “get out of jail free card”.

Therefore, while the following is interesting, don’t get too hung up on it:

The two most important stats: Are we garnering points at the required rate? And is it reflected in the table?

After 11 games our best league position was 1st, under Neil/Adams. Under Neil alone it was 2nd,  Lambert 3rd and Farke 9th.

For points accumulation Farke still trails, but not by the margin seen in league position. Neil would lead with 23 points, Adams 21, Lambert 20, and Farke 18.

Home vs. Away form 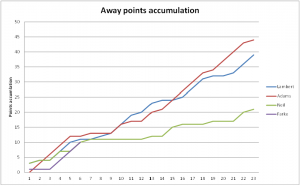 Previously away games were identified as the key area between success and failure for promotion. Farke’s away form is nearly in line with others (the same as Neil, 1pt behind Lambert and 2 behind Adams).

Home form (not shown) has Farke joint last with 8pts, Neil in the lead with 13pts.

Goals For and Against

Two key indicators of the likelihood of winning a game. Ideally the average goals scored is higher than the average conceded!

A disastrous start has shown a very clear improvement and is now in line with Lambert (13 goals) and better than Neil (15 goals). The Adams’ administration performed particularly well at this point, only having let in 10. Although ten games later and it all began to unravel.

Goals scored remains very low at 11 goals, almost 1 goal a game less than Neil and Adams (21 goals scored each). A key area in need of improvement!

It should come as no surprise to see two very different patterns in the graphs. For me this both vindicates the alarm people had in the early season (it was that bad), while supporting the positivity currently emanating from the pitch to the fans (things are that good). If promotion is our goal then we can’t take our foot off the pedal but the good news is that our squad clearly is capable of promotion pace points accumulation.

Cheers to Dave; interesting as ever. Let’s all hope for an update further on in the season that has plenty of upward curves.