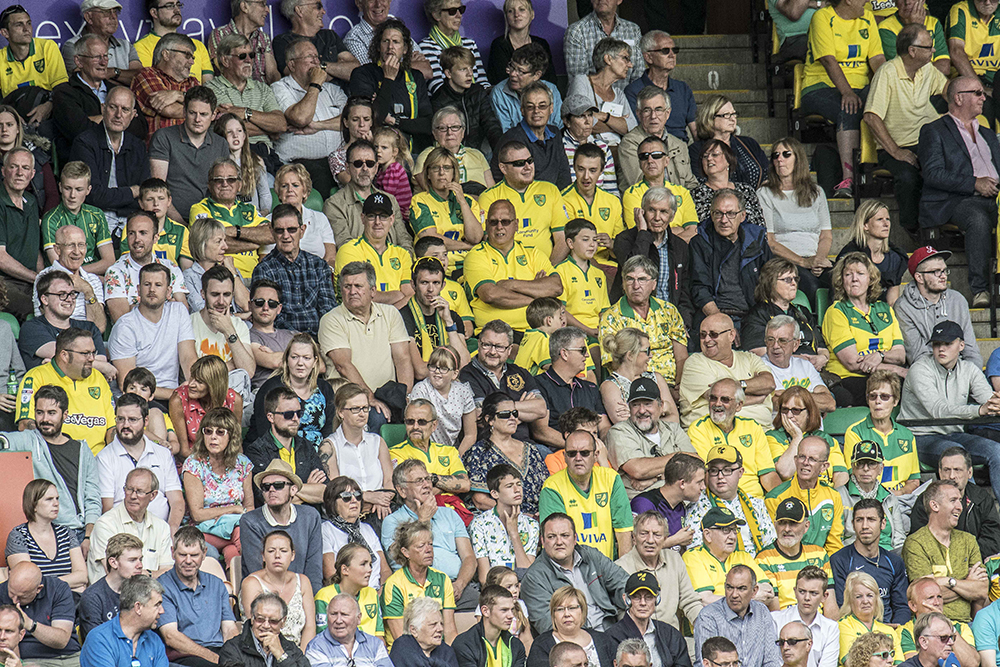 I can assure you there aren’t many benefits to being 60, but one of them is that it becomes much easier to cope with the rollercoaster ride that is the life of a City fan.

My journey started way back in March 1967 when I was ten. City had just pulled off a major shock by winning 2-1 at Old Trafford in the fourth round of the FA Cup against a United team containing George Best, Bobby Charlton and Denis Law and by dint of constant nagging, crying and general bolshiness I finally persuaded my uncle, who was a regular, to take me to Carrow Road for the next round, against Sheffield Wednesday.

This wasn’t my first visit to a football ground (the edifices of the 1960s hardly meriting the title of ”stadium”) because, back in August 1966 he had taken me along to watch Leicester City play West Ham in the season opener, and I well remember both teams providing a guard of honour for England’s World Cup heroes, Gordon Banks, Martin Peters, Bobby Moore and Geoff Hurst. On that occasion I had been safely installed in a seat but because he always stood at Carrow Road he was reluctant to take me along.

However, I’d managed to wear him down by the following March and while City lost that day, that first climb up the steps at the back of the old River End terrace and the terrifying surge of the crowd whenever City threatened were pivotal moments for me. While I was lucky enough to be taken to Wembley the following season to watch Manchester United beat Benfica in the European Cup Final, my heart was by then indelibly yellow and green.

Over the years my attendances waxed and waned as first university and then the surprising discovery that clubs were actually prepared to pay me to play football (and later manage) meant that I was often elsewhere and could only get to games now and again.

However, my passion was never diluted by my frequent absences as heroes came and went and the ground itself slowly evolved into its current manifestation. Of course, not all the changes have been for the better although I don’t miss having to hire cushions to make the experience of perching on the wooden benches of the predecessor of the modern City Stand slightly more comfortable!

The eventual disappearance of those cushions also removed a traditional method of patrons expressing their disgust at the fare on offer by tossing them onto the pitch. Probably just as well as we’d currently be seeing games abandoned due to the amount of stuffed fabric on the playing area.

However, while the old version of the ground had its drawbacks, the atmosphere was vastly superior to what we have now. One of my earliest memories is of the Barclay belting out its own cacophonous version of “Molly Malone”:

In Norwich fair city, where the girls are so pretty,
I first set my eyes on sweet Molly Malone,
As she wheeled her wheel barrow from King Street to Carrow crying…
CITY! CITY! CITY!

Of course, football itself was very different then, with many fans working on a Saturday morning before going to the game in the afternoon, and no sign of the “prawn sandwich brigade” at what was still seen as a working man’s sport.

However, while there are plenty of learned articles about the sociological changes to the make-up of football crowds over the years, there’s actually a much more straightforward difference between the game then as compared to now: exposure.

Back in the 70s football on TV was a relatively rare commodity, and in terms of City, the only way to see them was either to wait for their turn, alongside the likes of Colchester, Luton and Ipswich (who’d won the league in 1962 but never mention it now…), to appear on Anglia TV’s Sunday afternoon Match of the Week show (which ran from 1962 to 1983) or to get yourself to Carrow Road.

No Internet or 24-hour Sky Sports News meant that we had no knowledge of what the players had had for breakfast nor what the current transfer rumours were. In fairness, that wasn’t necessarily a bad thing, with match information only obtainable for those not at the game by turning out in the freezing cold to grab a copy of the Saturday evening Pink’un rather than simply firing up the laptop!

Whilst there is always a temptation to look at the past through rose coloured glasses, the lack of saturation coverage of football on TV made the match day experience so much more vivid, although it also had an edge. It was a world away from the family friendly environment that we have today but perhaps that tension added to the atmosphere. Oh, and of course On the Ball City was sung with correct words (its “scrimmage” for heaven’s sake!) and at the correct speed.

In my 50 years of going to Carrow Road I have seen some great City teams and some absolute dross. I’ve been exhilarated, and I’ve been apathetic; I’ve been high, and I’ve been low; I’ve been angry, and I’ve been sad. However, what that half century has taught me is that living through the lows makes the highs so much more intense and, more importantly, that there are worse things in life than following a struggling football team.

Of course, that may not be much comfort at the moment!

Cheers to our friends at Archant for allowing us Robin’s services for this short-term loan – Ed.

@JackReeveTNC He’s got what it takes imho. This could be an amazing season for him if he stays at #ncfc…

@lauren__hemp is an unreal baller, this tourny is hers man. Making all of Norwich and Norfolk proud. #ncfc #ENGNED