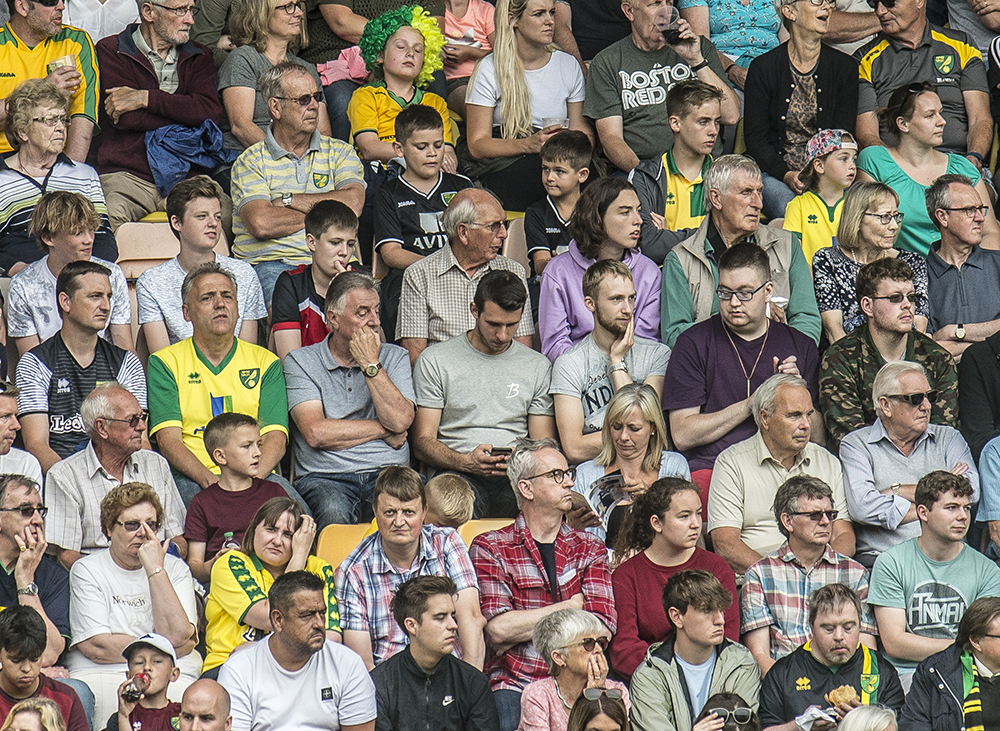 At the moment things at Carrow Road are far from rosy and there is an awful lot of moaning (more so than even the average Norwich fan can normally muster). But I can understand why.

I can also see through the negativity brought about by our present position in the league and read into the ethos and ideology of Daniel Farke and Stewart Webber. I still believe that if we give this squad time to gel and allow our key, injured players to come back we can still come good. I am willing to be patient in the hope that we will turn our present form around.

I get that five months is not long enough to see a mountainous climb through the wholesale changes that have been made. That is my opinion. We needed changes to rectify mistakes made in the past, but we can’t make these radical changes and expect things to get miraculously better. It needs time to be allowed to work.

If by this time next year there is no obvious move forward then I’ll be asking more questions but, for now, I’m on board and I’m supporting my team.

And talking of supporting the team, there’s been a conscious effort from some fans to improve the atmosphere, mainly in the lower Barclay,in an effort to raise the roof and make Carrow Road a fortress.

Barclay End Norwich and Along Come Norwich have organised, with some success, flags, marches and meet ups; a recognition that we can raise the players game by our vociferous support and that it’s not only a one-way street.

Daniel Farke has asked for us to vocally get behind the team, so it seems more than a little odd that while the chips are down, and there’s already an acknowledged issue in encouraging our loyal fan base to be loud and proud, the Club have started ejecting fans and sending out letters telling of the consequences to those who choose to remain standing rather than sitting.

Three seasons ago my son and I moved from the River End. We wanted to join in, to stand and to sing where we thought it was more acceptable. We had sat opposite the Lower Barclay for seven seasons, and my son had often asked if we were able to join them.

As an adult I decided to wait until I thought he was old enough to stand and be able to see the pitch.

The Lower Barclay and Snake Pit are synonymous with ramping up the chanting and building pressure on the opposing team and away fans. The venom from the Pit towards an opponent taking a corner and E block aiming jocular verbals at the away fans are traits for which Carrow Road is renowned.

So now, at an all-important time when we need the support and to lift the spirits on and off the pitch, when morale is as low as the entertainment level, when we need to be sticking together, we get one mean-spirited “fan” complaining about persistent standing! But not just complaining, also taking pictures of a child standing on a seat; bypassing the Club and heading straight to the local council!

The Council and emergency services grant the club its general safety certificate each year and without this a certain number of fans could not attend games and it would lead to a cut in capacity.

This led to the Safety Advisory Group (SAG) becoming involved and them stating that the persistent standing at the ground was unacceptable, and so the club have been told to make us sit or else reduce numbers in the lower Barclay starting from block A through to Block E.

The SAG have monitored home games and have deemed persistent standing to be a breach of the health and safety certificate, something that has backed Norwich City, as a football club, into a corner (one that has beaten the first man!). Unfortunately, it has ended in an own goal.

They have to put actions in place and enforce the Lower Barclay to sit, thus doing the dirty work for SAG and leaving the Board open for criticism of something they have had literally no say in.

This leads me on …

Surely this must now highlight even more the need for safe standing. The argument that there will be less season tickets in the area loses its argument if persistent standing continues – capacity will be cut anyway.

I, for one, would move my seat if the safe standing area was moved away from the Barclay as I simply prefer to stand at a game. And I can’t see why others wouldn’t be prepared to move to enhance their enjoyment of a game.

Can one moronic (in my view) complaint be upheld in A Block where the fan has complained? Surely the 300 other supporters in that block can’t all be in the wrong? Surely they too should be heard?

They choose mainly to stand, I’d argue that’s their prerogative. I agree it’s not safe for kids to stand on seats, however that boils down to the decision of the responsible adult.

Yes, Norwich is an all-seater stadium but most stadiums in the top two divisions are, and when I visit other grounds I invariably notice areas of people standing. We are not alone but have been targeted because of one person’s viewpoint and their stubborn refusal to move when not happy with those around them.

It also backs my debate (one that caused backlash) that if the Lower Barclay was the chosen area of safe standing it would be rejoiced by the majority and there would only be a minority moved. In my view this would lead to a harmonious result all round, with no pictures taken of children standing on seats by ONE person.

A choir does not sit to sing. If you want an electric atmosphere let us stand proud and raise the roof.

We are Norwich, this is our voice, we shall sing our anthem from Lower Barclay, Block A through to E.

At least we’re winning something this year #ncfc

2 beautiful things to come out of Norfolk all rolled into one. @NorwichCityFC and @lotuscars 😍 this is by far the best shirt yet! #ncfc #otbc