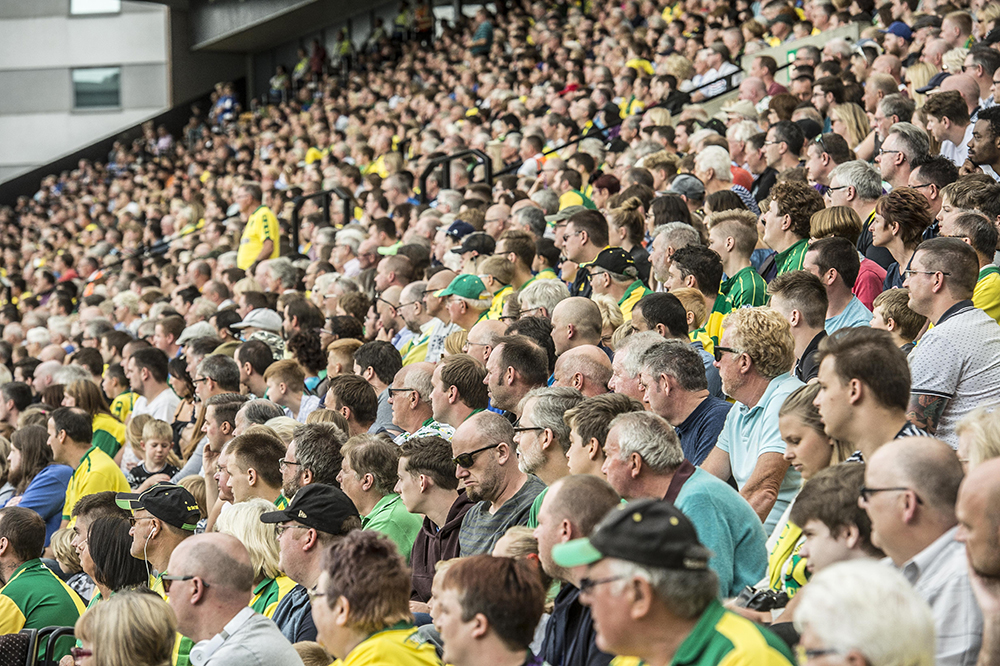 Ahead of tonight’s clash of Canaries and Bees, Kathy has been chatting with Sky Sports News presenter and Brentford fan, Natalie Sawyer….

K. I have nothing but respect for fans of smaller clubs that are geographically close to ‘the big five’. This includes supporters of clubs in Greater Manchester like Bury and Stockport. It must have been so tempting, especially as a child, to fall under the spell of United and City when there are regular Champions League epics on your doorstep. And this of course applies to Brentford fans. Were you never just a little drawn by the glamour and success of Chelsea just up the road? In short – why Brentford?

N. Why Brentford? That’s often impossible to answer because they’re just my team. I’ve cried tears of joy and sadness following them & I feel they are family. But, following Brentford began in November 1987 when I was 8. We were sat in what we call the Wendy house, now the away end at Griffin Park, and I remember the haze of the floodlights and the buzz of the crowd. My dad wasn’t into football before then but seeing how much we enjoyed it he took us more and more and now we are Bees through and through. So, that day back in 1987 could have seen us going to Stamford Bridge but it was Griffin Park instead and because of that we are Bees and heading to Griffin Park with my brother and my dad is just what we do on a Saturday afternoon.

In the same season that Norwich won the Play Off final, Brentford were semi-finalists. Given that you were in touching distance of the premiership that year have fans expectations risen? What would be considered a successful season by the Griffin Park faithful?

The 2014/15 season was unbelievable for Bees fans, as it was for Norwich I’m sure. We’ve had many near misses of making the playoffs to get in to the Championship so to have gone up the season before automatically and then shock the league for our performances and league finish was just crazy. I still can’t believe it happened. Losing in the playoffs was heart-breaking but you couldn’t help but feel a sense of pride of what our team had achieved. We were the oh so nearly team that could have provided one of the biggest shocks. So, ever since then fans expectations have risen & you can’t blame them for that. And our performances have often merited us being touted as a team to watch out for. A team that could be a dark horse.

So, every year I’m optimistic and every year I think we could spring a surprise and I think after 4 straight seasons in the Championship its fair enough for fans to want promotion. But first and foremost, we want to get to a point where other clubs aren’t saying “we need to be beating teams like Brentford” as hopefully we are earning our rightful place in the Championship by now but always securing our status in the league is what is expected!

What do you make of Mark Warburton’s departure soon after? He seems like a good manager and is quite highly thought of in the game. Indeed, his name has frequently been touted during the frequent vacancies at Carrow Rd over the past few years. Letting him go seemed like a crazy decision to those of us on the outside.

All Bees fans will love Mark Warburton for what he did at Brentford. He was the man that got us promoted and led us to the brink of the Premier League. He nearly made dreams come true. But credit also has to go to the coaching staff, to Uwe Rosler, our previous manager, and our owner Matthew Benham who started the new era for us. When Warburton joined Brentford as the Sporting Director he knew what Benham’s approach was going to be long term (using stats as part of the recruitment process) so when he became manager Warburton didn’t want to work under that new idea.

Credit to Warburton, he was honest about that although sadly when the news came out that he was going to leave it became an unsettling time for us. I’m sure most Brentford fans wanted Benham and Warburton to work things out so that they could continue the partnership that had been so successful but alas that wasn’t to be. We wish Warbs all the best but now it’s all about Dean Smith!

A question about Alex Pritchard. He first came to the attention of Norwich fans playing for Brentford in the 2014/2015 season when you had him on loan. That day he was by far the best player on the pitch. His career here has been marred by injury especially this season. He has been out for just about all of it after a nasty tackle at a pre-season ‘friendly’ at Cambridge Utd. During his limited appearances though, he has shown signs of being a very very good player as you probably aware. Many Norwich fans feel that he is a natural successor to Wes Hoolahan and if he’d been available since August we wouldn’t be languishing in mid table. How do Brentford fans view him these days? Boo or clap Friday?

Bees fans certainly will have a fondness for Alex Pritchard because he was a part of that amazing squad that nearly stunned the Championship in 2014/15. He’s certainly gifted and can cause problems that’s for sure and we enjoyed having him at Griffin Park as he was a key member of our team. He scored some cracking goals for us and was at times a handful to play against. Most fans now though will be indifferent to him and for the 90 minutes on Friday he’ll mean nothing more than being an opposition player. I’m sure a few will want to show their appreciation for what he helped us nearly achieve but that’ll come after the game!

I suppose as a sports presenter you don’t get the chance to go to games as much these days. Will you be coming to Norwich on Friday?

Alas I won’t be making it to Carrow Road. Work on Saturday morning means I have to be in the studio for 5am on Saturday morning so a late return from Norwich would mean I’d be a bit of a wreck presenting! I have made the trip to Norwich before – not to watch the Bees though but to present an East Anglian derby when Norwich won 2-0 in 2015! That was some game, and some atmosphere!

Who should Norwich fans be most weary of tomorrow and likewise who are you most worried about in our team? (No-one is an acceptable answer. Most can’t hit a barn door at the moment!)

On our day we can certainly be hard to handle. We are an attacking team that likes to play out from the back. We’ll try and create as much as we can and a lot of that will come down to Ryan Woods. He’s been instrumental for us in midfield and Ollie Watkins is another player who has taken to the Championship after his summer move from Exeter.

As for who we might be weary of from Norwich, there’s a few. The Irish Messi for obvious reasons and his protege now, Pritch! Any of your goalscorers, including Cameron Jerome, might just have the muscle to come on as a sub and cause a few problems for us.

What’s your score prediction? Are you confident?

I normally am a glass half full person but this game I find it hard to call. You hammered us last season at Carrow Road and I wasn’t expecting that! Both sides are a little bit patchy with their form so for that reason I’m going for a 1-1 draw!

And lastly I’m going to indulge myself here. Gary will probably delete it and tell me off but… [Gary will do nothing of the sort – Ed]

Jeff Stelling. My favourite personality in the whole of television, especially after he took the trouble to personally answer a question about Hartlepool that I tweeted in the days before the Internet trolls drove him away. What’s he like off screen?

Jeff is lovely. A funny, honest and genuine guy. I haven’t worked with him nor had much time in his company but from the occasions I have been around him he’s very down to earth and very approachable! And he really does know a lot about football and likes to know all the quirky stories from the Premier League to non-league!

Thanks very much to Natalie for her time, and a safe one to the Bees fans making the trip.