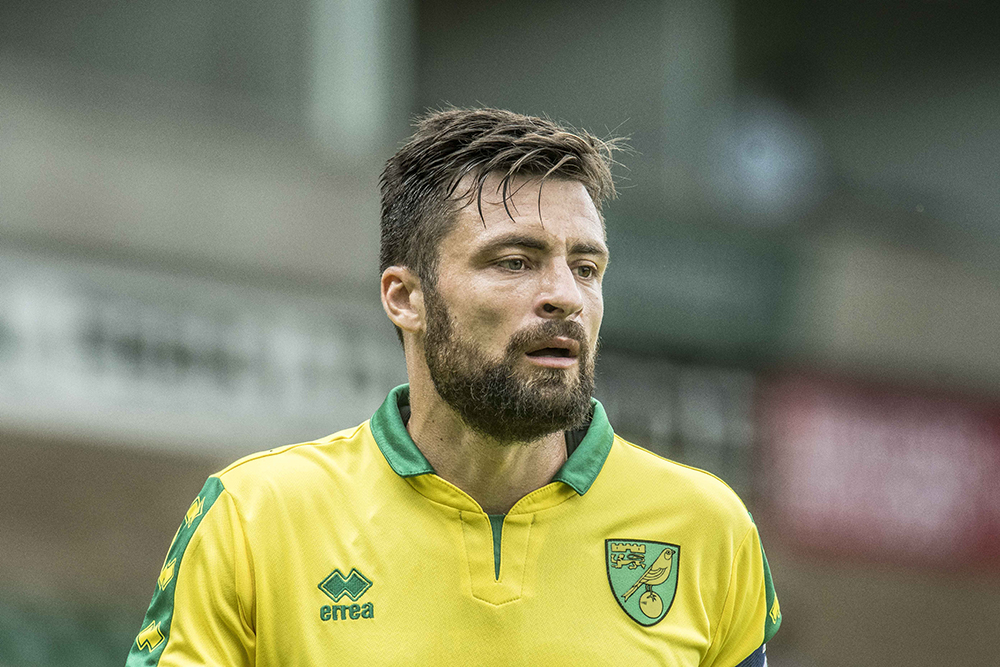 I’ve asked myself why I support Norwich many, many times over the course of the last 15 years (after most losses in fact) but this is the reason why. And, though you probably think the person sitting next to you at Carrow Road is an absolute buffoon, I hope that you feel that same sense of belonging too.

For the last eight years, we’ve had a player at Norwich City who feels exactly how we do. Russell Martin has felt every crunching tackle, heart-breaking defeat and last-minute winner as vividly as each single fan since he joined on November 25, 2009.

Despite this, Russ has received a lot of (sometimes deserved) flak for his on-field performances over the last couple of years, meaning it can be easy to forget just how much of an impact he’s had on Norwich’s recent history.

Turns out he’s had quite an impact.

From his debut on December 1, 2009, in fact, when City went 11 league games unbeaten, winning ten and drawing one (with seven clean sheets). Unfortunately, I don’t have the resources to check this but that’s got to be approaching some sort of record, right? How many times have Norwich even gone 11 games unbeaten, ever? At the very least, it’s not a bad start.

I don’t personally remember him playing that well, though. In his first season, he was fairly solid (certainly an upgrade on Jon Otsemobor) but it seemed as if he wouldn’t be able to cut it in the Championship (he certainly hadn’t the previous season with Peterborough – 11 starts, one win).

He most certainly was able to cut it, though. Russ played every single minute of our promotion-winning season, scoring five goals in the process – including a last-second equaliser against Cardiff that, had it not been scored, would’ve probably seen the Bluebirds clinch second place instead of us.

That season he also scored against Ipswich, the fourth in our 5-1 win at Portman Road. His record against our neighbours has been excellent in fact, with his time at the club coinciding with our current unbeaten run against Town. In seven East Anglian Derbies featuring Russell Martin, Norwich won five, drew two, lost none, scored 17 goals and conceded just five. Russ captained City in five of those games. Oh, and he also helped knock Ipswich out of the play-offs. It doesn’t get better than that.

Despite the Norfolk Cafu finishing second in the vote for player of the season in 2011, Paul Lambert still felt it necessary to bring in reinforcements at right-back, with Kyle Naughton brought in on loan. And, although he started the season at Wigan in his familiar position, Martin was then left out of the squad altogether for the next three games before being brought back for the win against Bolton. At centre-back.

Of the 33 matches Russ started in our first season back in the Premier League, 17 of them were played at centre-back. And, although Chris Hughton did primarily play Martin at right-back, he was then shifted to the centre permanently under Neil Adams. Russ is still only 32, and it is worth questioning how that decision affected his career at Carrow Road. He is not good enough to start in the centre anymore, but could he still be a worthy right-back had he not changed position?

Once Lambert left however, Martin’s best three years at Norwich were probably behind him. Despite this, Russ still continued to experience plenty of success at City. In total, he played 308 times for our club, made 125 Premier League appearances in yellow and green, and captained City, not only 149 times (one hundred and forty-nine times), but to play-off victory – becoming just the second-ever Norwich captain to climb Wembley’s steps and lift a trophy.

Of those 308 games though, there are three that stick out to me in particular (and they matter more than any stat):

1. Norwich 3-2 Derby [25 April 2011]. Simeon Jackson is credited with the 96th-minute goal that kept City second, but it was Russell Martin’s shot that was cleared off the line (the ball was actually going wide but we’ll forget that) and rebounded off Jackson’s chest for the winner. Russ had already wheeled off in celebration so, while the other ten players celebrated in front of the Snake Pit, Norwich’s no. 2 was stood by himself, hands aloft, in front of a Barclay going bonkers. The resulting picture (courtesy of our friends at Archant) still gives me goosebumps.

2. Norwich 3-4 Manchester City [29 December 2012]. This has got to be one of the most electric atmospheres I’ve ever experienced at Carrow Road, especially when considering Norwich were 2-0 down inside four minutes. The resulting fightback was led by Russ himself, who scored two goals to bring the game back to 3-2 and 4-3, geeing the crowd up with pulsating passion as he went.

3. Liverpool 1-1 Norwich [20 December 2015]. To anyone who has ever questioned Russell Martin’s leadership, effort or desire, I would ask you one question: Have you ever had a baby one evening, not slept all night, travelled to Liverpool separate from the rest of your football team, then captained that team to a draw at Anfield in which you scored the equaliser? I don’t need to say anymore, the man’s a bloody hero.