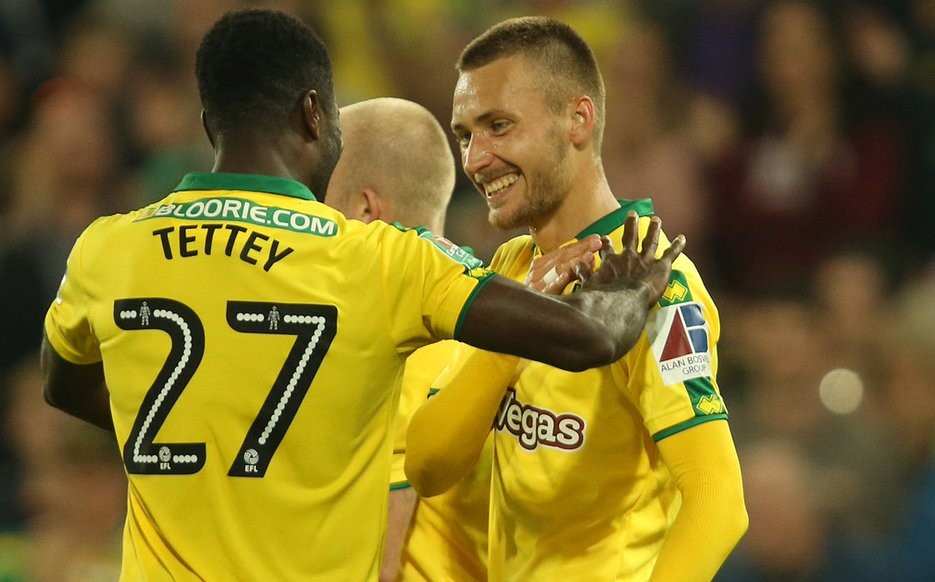 In a season that has been notable for too many afternoons and evenings of Carrow Road nothingness, yesterday was the exception.

It was a special day, and not just because it concluded with City ‘doubling’ Boro; enemies of old and red-hot promotion favourites at the start of the season. It was special because it was an afternoon where we finally came together; united in grief but also in celebration.

We talk some real nonsense at times; often we’re an ‘army’, occasionally we’re the ‘best’ and then when it suits we’re ‘one big family’. And then five minutes later, something occurs – usually a defeat – and we find ourselves at each other’s throats; divided, angry and disillusioned.

Yet yesterday proved my cynicism unfounded. Never have we felt more like a family.

The outpouring of love for Michelle Dack was spine-tingling; from her picture appearing on the big screen before the game to the minute’s applause on 52 minutes and then On the Ball City sung at it’s very best. The Yellow Army (yes, army) united in grief but also in support for those Michelle left behind.

I sincerely hope Ian and the family felt it a fitting tribute.

But it didn’t end there.

Ethan Thomas – son of Simon – was one of the mascots for the day. For a husband and a young son to lose their wife and mum in such tragic circumstances is truly heartbreaking, but if him proudly accompanying James Maddison onto that pitch yesterday amidst the Carrow Road cheers offered just one iota of comfort to father and son it will have been job done. I hope it did.

And then there was the day’s community hero, Chloe Smithson – a South Stand season-ticket holder from Kessingland – who despite having been diagnosed with a glioblastoma grade 4 brain tumour has been raising money for the Big C Appeal. She too was afforded a worthy, well-deserved and heartfelt Carrow Road ovation.

That City rewarded all three heroes with a win was entirely fitting. That they ultimately did so with an element of calm and class was the cherry on top.

In truth, until Tom Trybull chose to celebrate his new contract with that thumping 44th-minute strike, most of what had gone before had more than a whiff of familiarity. The build-up was slow, deliberate – even a little ponderous at times – and rarely did they sting the palms of Darren Randolph.

Rudi Gestede’s red card did little to change the dynamic – certainly from an attacking perspective – and only served to make things just a little more comfortable from a City defensive angle.

There’s no escaping that early on Boro did cause City a few problems, mainly through the pace and unpredictability of Adama Traoré, but following the red card Pulis’ decision to move him down the middle diluted the danger levels. Jamal Lewis would have breathed a quiet sigh of relief.

From thereon in it felt the whole thing hinged on whether or not City could force a breakthrough, and when they did it became just a question of game management; the timing of the goal providing a perfect psychological fillip.

With City’s noses ahead – something that has happened all too rarely at home this season – there was all of a sudden a purpose to the slow, patient, deliberate build-up. There was no need to force the issue. While City had the ball Boro were not going to score.

As it transpired City, through sticking to this methodical and patient format, did create more than enough chances to kill the game off – something seemingly lost on sizeable swathes of the River End – but at 1-0 there was always a slight niggle that Pulis-ball, probably via a set-piece, would be used to grind out an equaliser.

Yet the scares were few and far between, as were the nervously chewed fingernails. It was a second-half of composure from back to front.

Angus’ handling and kicking were impeccable and in front of him, the cohesion of Timm, Zimm and Himm (™ @clarebearthomas) just gets better and better. Individually, all four are finding a rich vein of form but as a unit, and as a back-three, it really is starting to come together. That they now understand their individual roles is clear; that they also understand each other’s role is becoming more evident by the game.

Tetbull (™ Gary Gowers) confirms with every passing game it plays together that it is by some way the best defensive shield combo, although the 30-minute cameo of one Moritz Leitner – on for the injured Trybull – was one of class and excellence. We may only have him here for three and a bit months; I suggest therefore we squeeze every last drop of quality out of him in that time.

As pointed out on Twitter last night, he looks like he could be this season’s Mitchell Dijks.

Onel Hernandez too offered glimpses of promise in his brief cameo and could have sealed the deal if his cross-shot had sneaked in Randolph’s far post instead of eluding both it and the onrushing Leitner. He looks one of the short, quick, low-centre-of-gravity variety, and will offer us a different variation of attacking threat.

It wasn’t about individuals though, even though some of them shone. It was about a cohesive team performance; a team that is starting to resemble one that is finally comfortable in its own skin. For a while it looked like eleven individuals trying – sometimes succeeding, sometimes failing – to shoehorn themselves into a pattern of playing that they were neither familiar with nor entirely believed in.

I don’t see that any more. I now see a unit that, while still the dreaded work-in-progress, believes in what it is trying to achieve and has wholly bought into what Team Farke is trying to build.

Add those three new Germanic bodies into the fold and after a rocky old winter, there are now several reasons to be cheerful – even if the River End is a little slow to catch on.