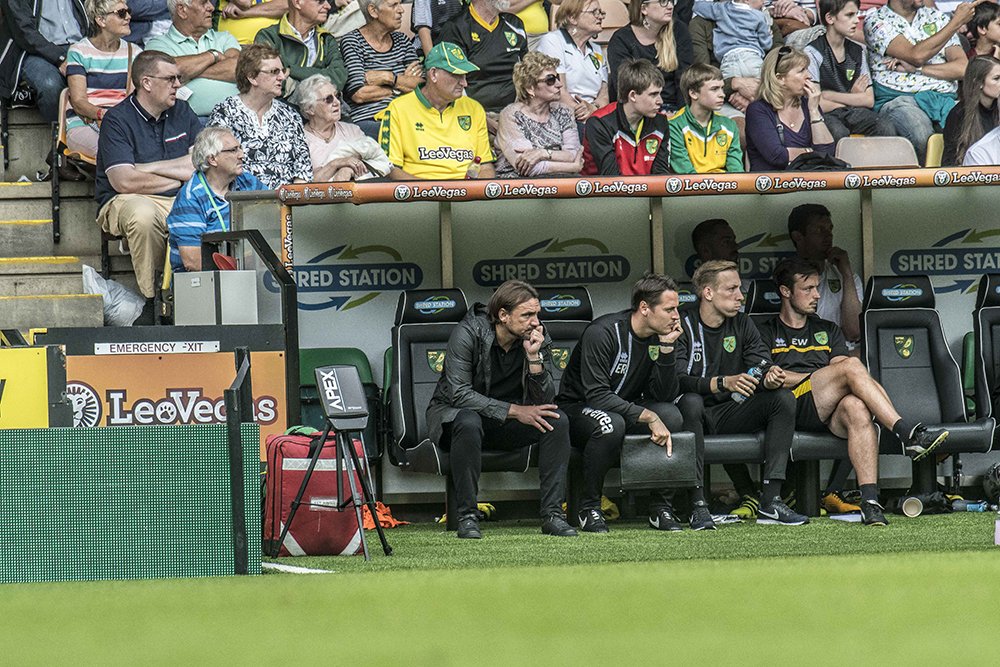 To these ears at least The Jam’s finest moment was That’s Entertainment. A sarky, poignant set of lyrics about life on an outer London council estate penned by somebody who knew that environment all too well and wrote all too honestly… one Paul Weller.

Well, the sarcasm was flowing around the Upper Barclay with the sages of all ages in agreement: Norwich City versus Nottingham Forest was not entertainment in the established sense of the word.

Five draws in a row – I cannot remember the last time that occurred, although I’m sure some of our readers will.

I don’t see the point of referencing that utterly forgettable match beyond mention of two incidents.

The first was like discovering rocking horse poop – yes, a header from Josh Murphy, in the box and from a James Maddison corner. Now I might have seen him get his nut on one in the box before. I truly believe that was against Forest at Carrow Road too – in the Youth Cup semi-final in 2013. A rarity indeed; somewhat akin to wandering past a dodo in Waterloo Park.

Secondly, and with no sarcasm whatsoever, to me the stand-out moment of the entire game was Grant Hanley’s cavalry-style rescue to help out Timm Klose when the latter, erm, stuffed up. One heck of a player is Hanley. He’s already got his own song!

Considering we had big Zimbo (personals) and Ivo (injury rehab) on the bench, the defence is shaping up very nicely. Back three; back four – they adapt to either with solidity and efficiency. If anyone had told me pre-season our back four for this match would have been Jamal Lewis, Klose, Hanley and Harrison Reed I would have laughed like a drain. But thus it came to pass and very effectively too.

Now down to that nitty gritty stuff. The hard yards. The issue no writer wants to dirty their paws with but has to even if only in an attempt to retain any limited credibility they ever had: What’s going on with the bloody strikeforce?

Cameron Jerome has been flogged off. Carlton Morris (who sent Shrewsbury to Wembley last night with a headed winner against Yeovil) is out on loan. Pierre Fonkeu and Tristan Abrahams are realistically nowhere near the first team and if Marley Watkins is a striker then I wear clogs and smoke a Meerschaum pipe.

The full debut of Dennis “the Menace” Srbeny was slightly underwhelming, which leads on to the absolute inevitable.

“When I don’t have the feeling there is a player willing to work in a disciplined way to improve his situation and that of the team I will do without them.”

When the head coach says that about the only recognised, front line striker on the club’s books you know something is very, very wrong.

Where is the nice guy who felt wanted and settled after so many loans that he was glad to be here?

Too many strops now Nelson and I’m pretty sure you’re shortly on your way to a different club you can probably be petulant with.

You could always knuckle down and battle it out with us, but I think somebody else will be wearing the number nine on their back next season.

That’s one for Messrs Webber and Farke to resolve of course, but the last thing we need is a would-be Eric Cantona without the inherent genius that made it all worthwhile for Fergie and Man Utd.

I realise it’s an over-worked analogy, but I would much rather be in the trenches with Cameron Jerome than Nelson Oliveira.

As many of us here on MFW and elsewhere reiterate it will be an interesting summer.

A bit like when The Jam introduced the keyboards for A Town Called Malice – drastic change was in the air. Certainly for Bruce Foxton and Rick Buckler anyway.

And before anybody else says it, on Saturday it’s to Hull and back… another one with 0-0 written all over it!

I mean, didn't he retire immediately after?