In the world of boxing, the term ‘pound for pound’ refers to the comparison of fighters from across different weight classes. It’s an often subjective debate which complicates even further once you extend it across eras to try and crown the best pound for pound boxer of all time.

But rather than pounds in weight, what if the pounds in question were those spent by Norwich in the transfer market?

Who then would be City’s greatest ever ‘pound for pound’ signing?

That rather depends on the perceived value we got for the money i.e. how much did the signing cost us and what impact did the player have on the club?

With regards to the former, we’d have to factor in both the transfer fee and the wages but also whether we recouped any money once the player left the club. We’d also have to apply some context to those figures, both in terms of City’s relative spending power and the market rates at the time of the transfers. Especially given the exponential rise in transfer fees, where zeros are added for fun, and the fact that some of us can remember an era when ‘you could go to a match, call into the pub for a beer afterwards, stop off for fish and chips on the way home, buy yourself a left-back and STILL have change from a fiver’.

On the question of what impact the player had, it’s not as simple as trawling through the stats – the number of appearances, goals, assists or clean-sheets. They’re a useful indication but they don’t recognise a player’s true worth; their influence on the team or their ability to light up a match with individual moments of brilliance.

But before I offer up my thoughts on City’s top signings, there are a couple of caveats.

I’ve not included players who came through the youth system; even though you could possibly consider them a signing of sorts. The likes of Craig Bellamy and Darren Eadie were brought into the club despite originating from outside of the region but to all intents and purposes, I consider them home-grown.

I’ve also excluded players who I’m too young to have seen play – or remember seeing play. There are many City greats who would deserve consideration but unlike Ipswich fans, I don’t feel entitled to bang on about things that happened long before I was born.

So, as with the recent Oscars ceremony, before we get to the ‘main event’ there are a few other awards to announce:

Winner: Marc Libbra. Scored 19 seconds into his debut after coming off the bench against Manchester City in a 2-1 win.

Honourable mention: Mark Robins. Having sold Robert Fleck to Chelsea in the Summer of 1992, City were tipped to struggle and in the opening fixture, found themselves 2-0 down with 30 minutes left at Highbury. Manager Mike Walker sent on Fleck’s replacement, Robbins (an £800K signing from Manchester United) with instructions to score two goals. He did. City won 4-2 and went on to finish third in the Premier League.

The Speculate to Accumulate Award (soon to be renamed the Madderz)

Winner: Nathan Redmond. Joined in 2013 for an initial fee in the region of £2 million and sold three years later for a figure closer to £10 million. Kerrrrrr-ching!

The Part Of The Furniture award

Winner: Bryan Gunn. Sitting in fourth place in City’s all-time appearances list on 477, Bryan’s 12-year playing career at the club provided many memorable moments including an absolute worldy save against Bayern Munich. Keeper, Coach, Manager, Ambassador, Sheriff, his attachment to Norwich City even extends to donating his son to ‘help out’ on matchdays. A true City great and well worth the £100K it took to bring him to the club.

Honourable mention: Adam Drury. Another player to notch up over a decade in Yellow and Green with 361 appearances, many as Captain. The understated left-back was a class act both on and off the pitch, following his £500K signing from Peterborough in 2001.

The Used To Be Sh*te, But Now He’s Alright Award

Winner: Iwan Roberts. The £850K signing from Wolves had an underwhelming first year but through sheer hard work and dedication, he turned up a different man for the 1998/99 season, scoring 23 goals in a prolific partnership with Craig Bellamy. 96 goals in his seven years at the club places him third on the all-time goal-scorers list, but his two Barry Butler trophies are a more telling indication of his contribution.

Honourable mention: Bradley Johnson. Who put the ball in the Ipswich net? Few would have guessed it would be ‘Super’ Bradley Johnson. Following an indifferent start, his City career exploded into life in the 2014/15 season, netting 15 times from the left of midfield and winning the player of the season award. His arrival on a Bosman and sale to Derby for £6 million four years later wasn’t a bad bit of business either.

Grant Holt
£400K for a player who went on to score 78 goals and led the team to successive promotions from League One to The Premier League, sounds like a bargain. It was. But let’s not forget, the club was so skint, it took a joint effort from the fans and Michael Foulger to stump up the money to bring him to Norfolk. Holt epitomised everything about a City side that enjoyed a meteoric rise up the league. Captain, talisman, goal-machine, moustachioed Derby Day hat-trick hero, tyre fitter and three-time winner of the Barry Butler, it’s little wonder WFLGH.

Darren Huckerby
So good, we signed him twice. Once to bring him in on loan and then in the ultimate ‘Christmas Miracle’ on Boxing Day 2003, he dumbfounded his agent Phil (and almost made me cry) by making the move permanent. Hucks was too good for the Championship and probably too good for us. In the five years he graced Carrow Road as a player, nobody I’ve ever seen could generate the same sense of excitement and anticipation when he took hold of the ball. I won’t dwell on the manner of his departure, aside from the fact that he refused to play in England again in case that meant he’d face Norwich City.

Wes Hoolahan
Q: How do you replace Darren Huckerby? A: By being an absolute magician. Wessi had big shoes to fill when he signed in 2008 and initially struggled until Paul Lambert made him the diamond in his midfield diamond. In his tenth – and possibly final – season at Carrow Road with over 300 appearances and 46 goals (and counting) to his name, Wes is a player whose performances and contribution to the club will perhaps only be truly recognised once he’s no longer weaving his magic and someone else is wearing HIS number 14 shirt. 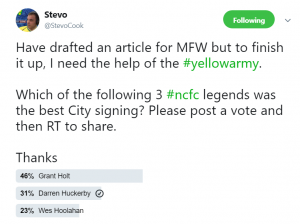 * The Best Pound For Pound City Signing, In My Opinion, Decided By Twitter Poll, Excluding Players Who Came Through The Youth Set-Up Or Those That I’m Too Young To Remember Award