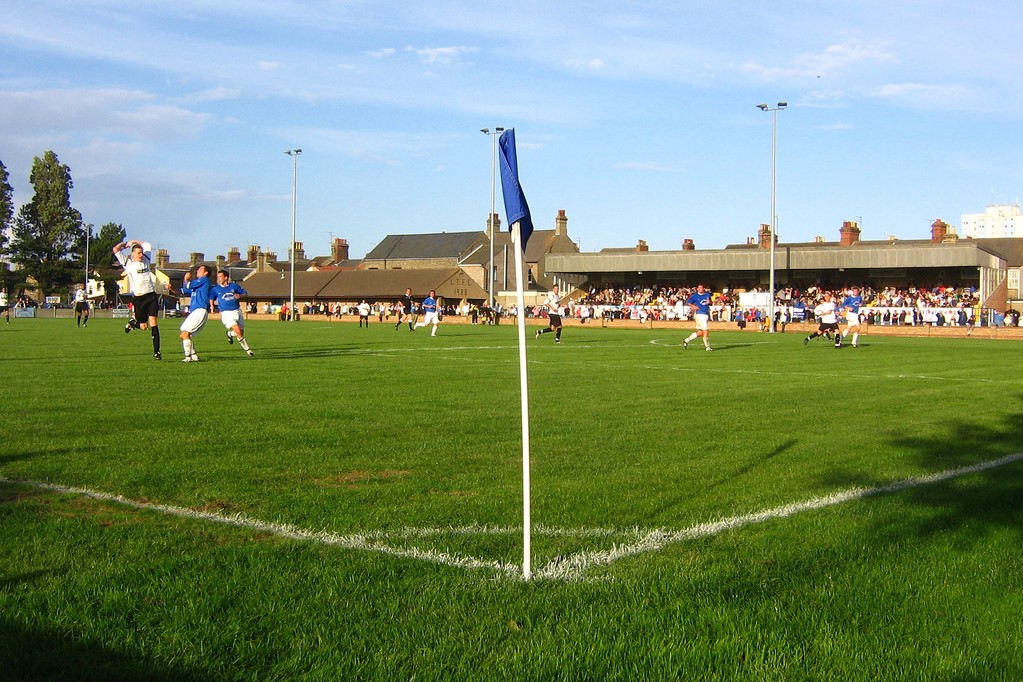 So, while Norwich City’s season meanders to a close, Dulwich Hamlet’s is building to a crescendo, both on and off the pitch. A 3-1 win at Lowestoft on Tuesday night puts them five points ahead at the top of the Bostik Premier League with nine games to play. Second-placed Billericay have to pack in fifteen before the end of April because of their ‘cup exploits’ (I love a football cliché).

Not surprisingly the Essex moneybags, owned and managed by a fly-tipping millionaire currently facing charges of intimidating one of his own players, have started to drop points, including a 3-1 home defeat to Dulwich a couple of weeks ago. Even if Billericay make the most of their games in hand, Dulwich are well-placed for the playoffs. If you want to see for yourself, they’re at Needham Market this coming Saturday.

Off the field, it’s a rather different matter. Dulwich Hamlet’s ground at Champion Hill, a lovely little spot in one of the leafier districts of South East London affectionately known as Tuscany after a row of Italianate trees at one end, has been closed down by the owners, a shadowy New York-based outfit called Meadow Residential, who bought the club for £5 million a few years ago for the site’s development potential.

Unfortunately, they forgot to check that their plans met Southwark Council’s local guidelines. The result is a standoff between the council and the owners, with the council playing the goodies and supporting the football club, while the owners resort to all kinds of blackmail, including most recently attempting to trademark the club’s name and presenting them with a bill for ‘unpaid rent’ of over £100,000!

It’s all been debated in the council, and even in the House of Commons, with loads of national press coverage. There was a big march through Dulwich last weekend, to save one of the oldest and most community-minded football clubs in the country. The longer-term prospects are actually quite good, with more ‘progressive’ developers making serious offers to buy Meadow out (including a housing trust led by local boy Rio Ferdinand) and Southwark Council threatening a Compulsory Purchase Order.

In the meantime, the Hamlet are playing their remaining home games at Tooting and Mitcham’s really nice ground a few miles away. One way or another, it should all turn out OK in the end.

If only the same could be said for Lowestoft Town. Promotion to the semi-pro big time of the National League North a few years ago turned out to be a logistical, football and financial disaster. More recently the loss of the club’s academy has deprived them of an estimated £100,000 in annual income.

Their playing and coaching staff have not been paid since December. Not surprisingly the best of them have gone elsewhere. There is now a very real threat of further relegation. The game against Dulwich was a complete mismatch, with Dulwich bossing the ball and 3-0 up by halftime. Lowestoft’s last-minute goal, their first shot on target all evening, came from a mysterious penalty the referee appeared to award out of pity. At least a hundred of the 350 crowd had come all the way from Dulwich and contributed generously to the pitchside bucket collection.

As things stand, it’s hard to see how Lowestoft can see out the season, let alone avoid relegation. Their only income is from match attendance, and even with widespread appeals to local football supporters turnout is pretty low and noticeably aged. Where, we might ask, are Norwich City in all of this? There were a few yellow and green scarves in evidence the other night, but barely enough to fill a car for the 50-mile round trip.

A few years ago, when Lowestoft were on the up under Craig Fleming, he told me he’d approached his old club with lots of ideas for cooperation between East Anglia’s two biggest clubs (hello Ipswich) and got nowhere. They weren’t even prepared to publicise Lowestoft home games amongst NCFC season ticket holders.

More broadly, we might also ask where the Football Association are in all this? The blazers and suits at Lancaster Gate (are they still there?) have said zilch about Dulwich’s predicament, and they probably haven’t even noticed Lowestoft’s.

While Big Football drowns in dodgy global money from oligarchs and sheikhs, the game at grassroots is struggling to survive.

On the Stall City @onthestallcity ·
2h