In my continuing series of football fans I have met unusual circumstances, let me introduce Fulham fan, Graham Clowes. I first ran into him storm chasing in the Great Plains in 2013. Since then we have spent many hours putting the football world to rights on long road trips across the US midwest whilst getting in just the right position to witness severe weather and tornados. Graham and his wife Tracey live in Worcester but are lifelong Fulham fans. 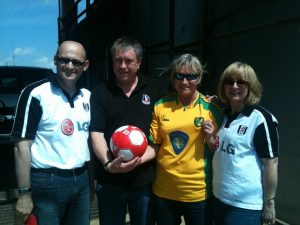 KB: You came pretty close last season but fell at the final hurdle. It looks as if you’re nailed on for the playoffs again but are you looking forward to it this time, or are you approaching it with trepidation?

Graham: Last year was disappointing as we went out in the play-off semis. What made it worse was that we thrashed Huddersfield both home and away. My heart says we haven’t yet given up on the automatic place, but I think dropping 2 points to QPR in the last game – when we looked a bit leggy – meant that the best we can hope for was a playoff place, and we should comfortably achieve that even if we stutter over the line.

We can always hope for a Cardiff slip up – but there would need to be a few, so realistically its playoffs for us I think. If we are in the playoffs this year I fear we will lose out again, but it will be our own fault as we had such a bad start to the season.

Cardiff look strong, but Wolves have wobbled a bit during the past few weeks. It would be met with a few smirks in these parts if they bottled it. Might have to get the ‘You’ve let us down again’ banners out again!

You’ve had six managers in the last ten years. Is Jokanovic the man?

Yes, he most definitely is. He has been a bit hamstrung by the Chairman’s use of statistical analysis when signing players… but that is over now, and Slav has control of signings. The first few he has made, albeit loans, are already proving successful.

As an outsider I know very little about the club’s owner Shahid Khan, in fact I had to google it to find out his name! Unlike his predecessor, he seems to keep a low profile. What’s he like? Is the club his plaything or is he a genuine fan?

He is a Pakistani-American and he made his money from a car parts company. He is supposedly one of the top 200 richest people in America. I suspect he is more interested personally in his other sporting interest, the Jacksonville Jaguars (American football). However, his son, Tony, is much more active with Fulham and is personally involved with all things football at the Cottage and the training ground. Whilst Shaheed is often seen at home games, it is Tony who is really integrated with the daily routine of the club. He is an impressive figure and plays a large role in making us the club we are.

It would be hard to top Mohammed Al-Fayad. He brought us up from the lower leagues and transformed a sleepy club into European finalists is a very short space of time. As such he is a legendary figure for Fulham fans – and if the price for all the success he brought us was putting up with ridicule for the Michael Jackson statue – then we can live with that! The Khans are much less flamboyant – but very popular amongst the club’s fans.

Tell me about David McNally. When he came to Norwich from Fulham he was apparently on ‘full gardening leave’. What was that all about? We never really heard much this end. Any gossip from the Fulham faithful?

I have no great insight into this one – but can speculate. Mohammed Al-Fayad demanded that those at Fulham were 100% committed – and quite right too. Whilst McNally had done a great job, particularly with our finances as we rose up the leagues, there was speculation linking McNally to Arsenal – so there may have been something in that. Mohammed would not have been happy that this was in the air so probably demanded some sort of commitment from McNally – and if that was not coming, Mohammed would have made a change.

The ‘full garden leave’ was probably a case of “if you aren’t in this 100% don’t bother at all” so he wasn’t required to work his notice – but Mohammed probably did not want to waive the notice period to let him leave to go elsewhere – hence the garden leave. That is my theory… it’s in keeping with how Mohammed operates – and seems fair enough to me. It’s akin to letting a want-away player see out his contract before allowing him to move – even if that means he is not contributing anything.

Interesting and certainly makes sense. He doesn’t seem to stay anywhere for any length of time.

I’d like to ask you about playing against Norwich now. Every season when the new fixture list comes out (and if we’re in the same league of course), Norwich fans scan down the games and say, ‘Let’s see when we’re going to lose against Fulham this time round’. How do you see the fixture? Do Fulham fans think ‘well that’s six points in the bag already’ or isn’t it a thing for you?

I think its three points when we play at home. Playing away is another matter. Historically we are generally poor away from home – although this season we seem to be bucking that trend.

It’s never easy playing at Norwich – generally, you have a strong team and not a side to be taken lightly. Clearly, this year must be disappointing to the Norwich fans. I thought you would be up there challenging for the automatic spots – but that hasn’t happened. Like us, you have struggled a bit since coming down. The worst thing is that both teams would probably survive in the Premier League – it’s just so hard to get back in once you have dropped down – but at least neither of us did a Wigan.

Moving onto the game, I’m guessing you’re going to be more nervous about it than we are. Who are you most worried about in our team? James Maddison I expect but any other bogey players for Fulham playing in yellow and green?

To be honest I don’t know much about any of your players. I have heard that Maddison is a prospect who is interesting a lot of Premier League clubs – but we have many like that in our team (Fredericks, Cairney, Sessegnon).

And who should we be worried about?

Definitely the three above but I am a bit concerned that our two best players – Cairney and MacDonald will probably have played two international games and may be a bit tired.

And finally, a score prediction?

I think a draw will be a good result for us. I am expecting a tight game. I’ll go for 1-1.