On Thursday, I chaired an informative Q&A session after the Canaries Trust AGM at which Steve Stone and Stuart Webber spoke candidly about the Club’s financial position and transfer policy for the summer.

No issue was off limits and only the most dedicated miserabilist would refuse to acknowledge and praise the level of transparency that we are now seeing from the Club’s key decision makers.

While more of a blow by blow account will be available on our website (www.canariestrust.org), I wanted to expand upon some of the basic messages that came across because they should give quite a lot of reassurance to the majority of fans.

Since coming back from Australia I have read so many posts on social media from people who can’t imagine life without parachute payments (although four of last season’s Championship top six didn’t have them) and are convinced that the family silver will have to be sold in the summer. 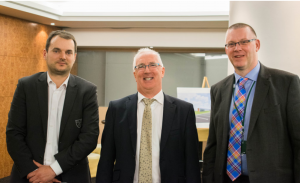 Steve Stone painted a different picture (although, of course, he isn’t as credible as that bloke someone’s mate overheard down the pub…). While there is still juggling to be done, there is no endless downward spiral of the financial situation. The problem is that the Club is still paying Premier League wages to some players, but once these are off the books a sustainable equilibrium will be reached.

The sale of Alex Pritchard (which, as Webber went on record as saying a few weeks ago was forced by the player, rather than being an act of desperation by the Club) has helped the situation, and it was confirmed that the Club wouldn’t need to sell to start doing business in the summer (in fact, one, as yet unannounced, deal is apparently already done) but would have to in order to do everything it wants. There are very few clubs that buy but don’t sell in transfer windows.

James Maddison is, in my opinion, something of a red herring, because a player of his quality would be coveted whatever our financial situation, and whether we like it or not, we are a Championship club next season while he is destined for the very top.

Every player has his price and a pragmatic view (and I would stress this is purely my opinion and not based on anything said on Thursday evening) is that he will be snapped up at some point, so if the Club can get stupid money now which would allow the further development of the squad then surely that is good business practice?

Of course, Maddison has been integral to City’s successes this season, but that sort of dependency on a single player is not the way to build a team or progress as a club. After all, and heaven forbid, what if he got a career ending injury?

It was clear from Webber’s graphic description of Colney when he arrived (“the inmates were running the asylum”) and the struggles to bring about a culture change that there were many problems in pre-season that were not obvious to the fans.

His description of a move from “players thinking that Norwich City owed them something to making them understand that they owe Norwich City” suggested that there were ingrained attitudes that took time to eradicate. He also confirmed that the atmosphere among the playing and managerial staff is infinitely better and that that will provide the springboard for a much more effective preseason – particularly with so many staff and players having a Championship season under their belt.

What was also interesting was his description of the total overhaul of the scouting system, which has been the Club’s Achilles heel for so long, in particular the development of a European network, focussing on a few specific countries in order to gain specialist knowledge rather than trying to be “jacks of all trades”.

The idea behind this is both to seek out the best value, but also to be able to track prospective signings over a period of months rather than a handful of games in order to have the best chance of picking players who are best suited to the Club and English conditions.

Clearly, this guarantees nothing (Webber made the point that Paul Pogba hadn’t really made much of an impact at Manchester United so far despite being regarded as world-class and costing £89 million) but it is a massive step forward from the Club’s previous approach, and, with the upgrade of Colney and the securing of continued Category One status for the Academy, is likely to pay dividends in the future.

Overall, what came across to everyone who attended on Thursday was that the Club has a viable long-term plan in place which is being enacted by highly competent people, and that plan is firmly focused on a return to the Premier League.