As the 2017-18 Championship season meanders towards a painfully drawn out conclusion, with Norwich City unfortunately destined for a mid-table finish, the prospect of a third consecutive season a second-tier level inevitably beckons.

What will make 2018-19 season different to the proceeding two seasons is the loss of the Premier League parachute payments, as the brutal reality of self-funding kicks in – the Club’s income reducing in half.

City still have to deal with the legacy issues, overhanging until the summer after next, of the January 2016 transfer window madness – the gamble, undoubtedly taken in good faith, which didn’t pay off, as relegation followed just five months later.

Messers Naismith, Jarvis, Klose and Pinto, contracted until June 2019, all on big money deals, certainly by Championship standards, unless Steve Stone can ease a few out through the exit door this summer.

So where, exactly, are City likely to end up? If social media is your compass, a quick review will produce predictions ranging from, “destined for League One”, to “mid-table mediocrity”, or, hopefully, “play-off contenders”.

Football, like any business, is all about money – without it, in the eyes of many, you’re going to be uncompetitive and destined never to be promoted, unless you “get lucky”.

Trying to find evidence to support whatever particular viewpoint you take is typically limited to banding around specific team names to reinforce the chosen vision.

Hardly the most scientific approach, admittedly, but usually more than sufficient to generate a debate nevertheless.

So, what, if any are the alternatives?

In an attempt to at least engender some meaningful debate, reviewing the financial state of other Championship clubs may, at best, give a feel for how our competitors are doing, albeit with certain caveats.

For a start, the most recent comparable financial results for each club relate to the 2016-17 season, which, as with all accounts, are inevitably out-of-date the moment they’re published.

Additionally, the data set is incomplete, with Newcastle, Huddersfield, Fulham, Leeds, Derby and Brentford yet to file their accounts, while a number of the teams included have either since been promoted or relegated from the Championship.

Looking backwards to try to predict future outcomes is equally problematic, but, in the absence of anything more meaningful; here goes!

What’s immediately obvious from the table of total income for the 2016/17 season (shown below) is the huge variance in receipts, ranging from Burton Albion, with just £11 million, to Norwich (in all probably exceeded by the undeclared Newcastle United) at £75 million, with an average income for the 17 clubs that have reported at £31 million each. 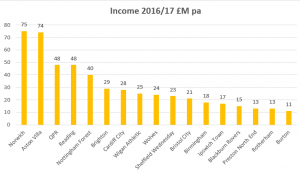 The recipients of Premier League parachute payments clearly dominated five of the top six places, albeit the correlation to final league positions, even with the benefit of such receipts, is less apparent.

The contrast across the spectrum in broadcasting revenues is that Norwich, with the highest receipt, received £7.77 for every £1.00 received by Burton Albion.

Perhaps the greatest “takeaway” is that the remaining Championship clubs received between £6.5 million to £8.1 million per season – exactly the “ballpark” Norwich will be in from 2018-19. 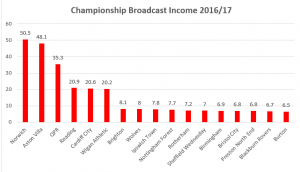 With broadcasting income due to take a big hit, there’s likely to be an increased dependence upon the next biggest source of income – gate receipts. While City have received much criticism for having the Championship’s highest cheapest adult season ticket, it may come as some surprise to find that total match day receipts were only the fifth highest in the division.

Again, the range of total gate receipts is huge, from £1.6 million for Burton, up to £10.7 million for Aston Villa and the now-promoted Brighton. Nevertheless, although the level of season ticket sales have yet to be announced for next season, City probably can still expect to be within the top quartile. 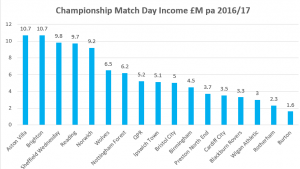 Unsurprisingly, the highest expenditure for all clubs is wages, with the primary driving factor being players still contracted following relegation from the Premier League. No great surprise to find both Villa and Norwich (with Newcastle probably top when they reveal their results) with wage bills approximately double the Championship norm. 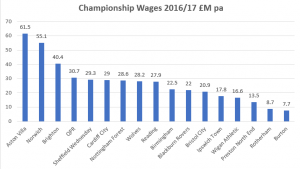 Obviously, with such a variance in Championship Clubs total incomes and wages bills, a more useful barometer is wages as a percentage of total income. Even with the supposed benefits of Financial Fair Play rules, most clubs are operating on something akin to “car crash” accounting basis, with over half those who’ve reported having a ratio greater than 100% – bananas! 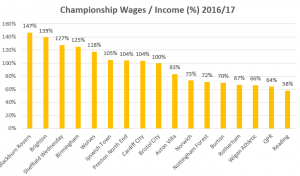 So, where’s all this analysis likely to take us come next season? At a best estimate of a total revenue spend is likely to be in the order of between £30 million to £35 million. Comfortably within the top third for the Championship.

On the outgoings side, the Club confirmed at its recent Global Canaries meeting that wages have already been reduced from £55 million last season, to £32 million in the current season, while next season’s forecast will be less. Exactly how much less will be dependent on this summer’s transfer dealings.

So, what’s the ultimate conclusion? Perhaps it’s this – while having money is clearly important, it’s not necessarily how much you actually have; equally important is how you actually spend it!

Finally, a confession, before anyone mistakenly thinks I’ve spent far too many hours pondering over the financial accounts of the various football clubs mentioned above, all the figures used within this article have been sourced from the excellent website www.priceoffootball.com