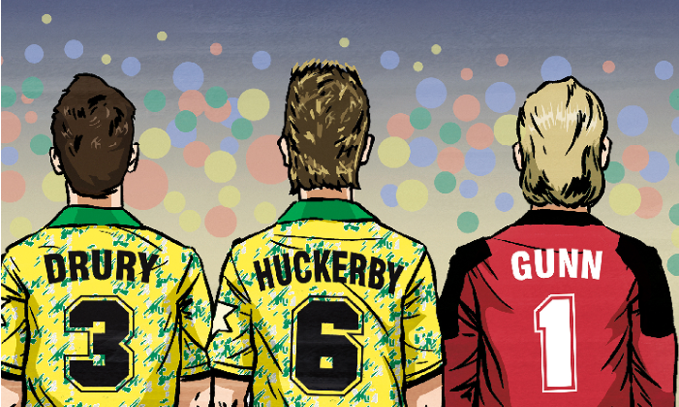 City favourite Darren Huckerby is hoping for a slightly easier ride the next time he graces a showpiece footballing event – namely Norwich’s Inter Milan reunion on Sunday, May 20.

The 42-year-old winger was left battered and bruised as he inspired Cringleford Vets to a league and cup double in their recent Norfolk Veterans Cup final against Horsford – a Huckerby hat-trick suggesting he has lost little by way of an eye for goal ahead of City’s big Italian date.

It would just be nice if his ankles could be spared a little treatment by the Class of 93 with the likes of Francesco Toldo, Javier Zanetti and Nicola Berti expected to feature for ‘Inter Forever’ against Bryan Gunn’s hand-picked ‘City Legends’ line-up.

“I’m looking forward to it,” Huckerby said, as the club brought together a number of familiar faces to meet the Press ahead of their summer fund-raiser.

“It should be different and there are a lot of old boys coming back,” he added. “It’ll be interesting to see how we get on against a team with a lot of good players.”

A team that is a far cry from Horsford Vets and that recent 4-1 success for Ecky Limon’s all-conquering Cringleford side.

“I’m feeling OK – I still keep relatively fit. And getting kicked is part and parcel – it’s something I’ve been used to since I was 17-years-old.

“So it’s not a new thing. It just probably takes a bit more time to get over a kick, but in the position you play you’ve got to get used to getting a bit of rough treatment. It’s been the same for 20 years.”

Not that he is expecting the same from Berti and Co. And nor is he expecting the Italians to be out of shape and chasing his heels.

“I think they travel around and play a lot of games so they’ll be in good shape, so we’ll just have to see how it goes,” said Huckerby, clearly up for more than just a walk-on role.

How long he graces Carrow Road again for will be a decision for the manager – in this case, City’s UEFA Cup boss Mike Walker who will find himself back in the dug-out for one, last time.

“There’s 25 Norwich lads coming down, so it’ll be interesting to see how many minutes we each get,” said Huckerby, who will at least have two, familiar faces to aim at cross-wise – big pal Iwan Roberts and three-time City Player of the Season Grant Holt.

“That’s what you want – always. Like I say with the numbers there might be a lot of chopping and changing, but when you’re on there you want to show everybody what you can do and it’ll be the same for everyone in the Norwich squad. But then I’m equally sure that the Inter lads are coming here to win the game.”

A big match atmosphere will help raise both the tempo of proceedings and, ideally, funds for the club’s Community Sports Foundation and The Nest.

“I think you do miss these types of games as a player,” admitted Huckerby. “But I’ve been lucky to have played for some big clubs and enjoyed some big games and hopefully this will be another one.

One thing that will happen is the combination of Huckerby and Holt taking centre stage – the first time the pair have played together in a competitive setting.

“He’ll expect some good crosses come the weekend. He thrives on big atmospheres and good balls into the box so hopefully, I can smack a few into him and obviously Iwan’s on the bench too and he might get onto the end of one.”

He could also have Darren Eadie for company as the former Mustard TV presenter makes a welcome return to the playing arena.

“We’ll have to see – how many minutes we’re on for, but hopefully yes. But whoever is on, we’ll look to make it a good game and a game we want to win.”

Tickets for the contest cost £9.93 for adults and £1.93 for Under-18s. Hospitality packages are also still available. The hotline number is 01603 721902 or tickets can be purchased from the ticket offices at Carrow Road, Castle Mall or Chapelfield .