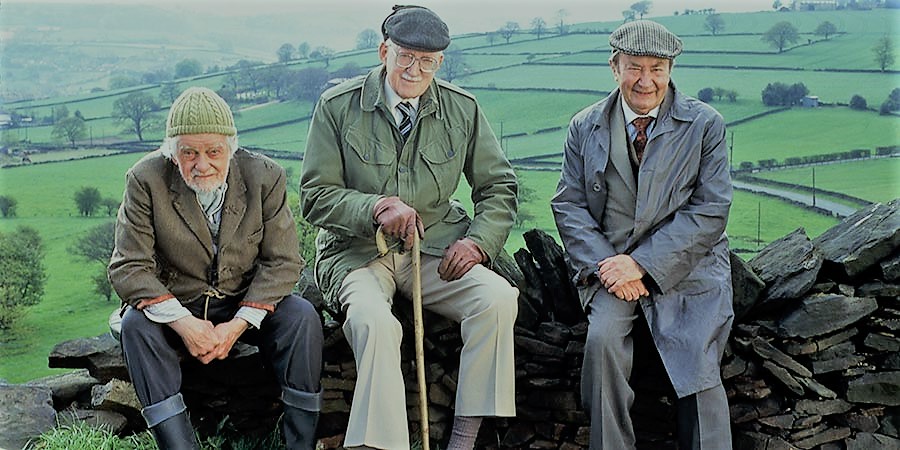 Much as I’d like to cling on to a different view, the truth has become inescapable.

(You didn’t think I was going to turn against our club there, did you?  I’ll come back to that, but for now….)

The players I now watch in the yellow-and-green could be the grandchildren of those I started watching. Actually, remembering the character of some those players, it’s entirely possible… but that’s another story.

I recently posted on Facebook a picture of myself and two other MFW writers (who deserve to remain anonymous in this case) in our replica shirts before a match.  One comment cut through everything in six words: “The Last of the Summer Wine”. Ouch.

The only meaningful thing to say about getting older is that it doesn’t feel remotely as you expected it would. While the body undoubtedly ages, your outlook can easily remain youthful/juvenile/irresponsible (delete as appropriate).

Some of it is OK. I don’t fret about things as I used to (the obvious exception being City’s results). Drinking is more fun. And it’s actually easier to be yourself.

Aztec society, as I understand it, was very punitive on misbehaviour, fornication and so on – then all its laws were suspended when a man reached 60. What an admirable idea.

No, I don’t know whether the same applied to women.

There are challenges, of course. Such as persuading my wife that my shoulder is far too painful for putting up shelves but is actually fine for golf.

It’s also, perhaps, easier to take a longer and more patient perspective when you’re older. Mind you, that theory has been tested lately with a series of Canary Calls along the lines of: “I’ve been watching them for 50 years, and this is the worst I’ve ever seen”.

In truth, if you’ve been watching City for 50 years, you’ve certainly seen worse – but we’ll come back to that.

Regular readers will know I’m inclined to an optimistic view, of course. This weekend saw another social media comment as sharp as the Summer Wine one: “ There are things in life that are inevitable: death, taxes, and Stewart Lewis putting a positive spin on NCFC”.

It’s so neat – and close to the truth – that I didn’t have the heart to deny it.  Actually, though, it’s not quite true. Last season I was highly critical of the club, but not this time.

Why am I more indulgent now, despite 14th place and an utterly miserable finish at Hillsborough?

It’s not because I have certainty about City being better next season. If we can get the strikers and loanees we want, it seems to me a distinct possibility – but none of us can know at this point.

The difference is what the club is doing. In business – and maybe especially in chess – I learned about the distinction between tactics and strategy, and why you need both. In a chess game you have to assess and counter immediate threats to your pieces and make immediate threats to your opponent’s – tactics. At the same time, you have to have a mental picture of how you’d like the board to look in 10-12 moves’ time, and work towards it – strategy.

On its own, neither is enough to succeed. Both are essential if you want to win at any decent level.

Football clubs, including Norwich City for most of the past decade, tend to be driven by tactics at the expense of strategy. A traditional structure where the manager is the sole football expert will tend to aggravate that skew.

If you get to the Premier League and make flawless use of the money that falls into your lap, tactics can be enough (at least for a few years until you make some mistakes). But if you want to sustain success, or arrest a decline, you have to have longer-term plans – i.e. strategy.

From 2015 to 2017, Norwich City was a classic example of short-term, tactic-obsessed management. Quick fixes, no proper development planning for our  academy or its players, nobody to question and share wisdom with the manager.

The result was the horrible situation we now find ourselves in: the need to re-build a team while cutting the budget by £35m, and simultaneously to put down the roots for future success.

We shouldn’t have ended up here, but we have. By hiring a traditional manager, a year ago – as suggested by countless Canarycallers – we might have done slightly better this year. But to put the club on a sounder and longer-term footing, we needed change.

We made change, in spades. The price of being radical was a first season of learning for our new players and coaches alike. The reward is a greater possibility of future success.

In the big picture, and with the absolute necessity of finding bargains in both permanent and loan signings, I’m not convinced we could have done better than Stuart Webber and (perhaps more debatably) Daniel Farke.

As for me, I’m planning to be around for a while yet. But above all, I’m taking my plan from Jean Lemoyne:

At whatever age, I hope to die young

@cjsouthwell1902 It's an average League One team. In that sense, he's doing OK. It's their owner/structure, lack of identity, and lack of investment that is the issue. Tough gig for anyone. But a reminder of how lucky we are as Norwich fans. #NCFC #itfc

Donate to this everyone #ncfc https://www.justgiving.com/fundraising/one-thousand-miles

A promise is a promise... #NCFC

@paulcooke6 @TheRug85 This is how I think too! An East Anglian derby taking place in the Premier League would be fantastic for both the economy & sport in this region...
#ncfc #itfc

Watching the #leafs is like watching #ncfc. We never make it easy.