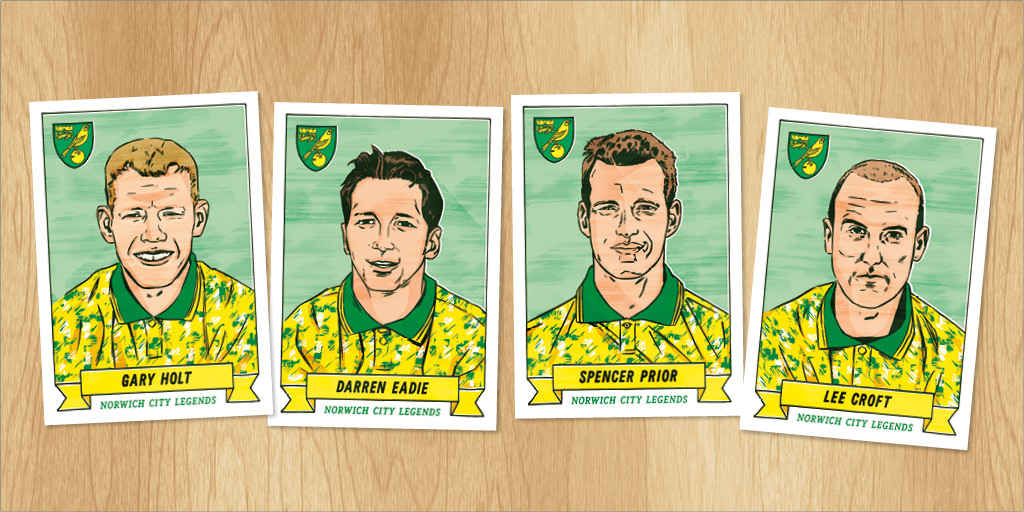 Way back when, when I was a mere slip of a lad who was playing footie on Saturday afternoons rather than watching it at Carrow Road, midweek games were an absolute treat. A proper win-win.

I got to see the old girl under the lights, while also getting to watch my heroes who at weekends were, to me, largely lines on the BBC Final Score teleprinter and figments of my imagination conjured up by words in the Pink Un and the Sunday papers.

There was of course Match of the Day to dip into, although back in the day they only covered featured matches and the odd live game on Sky, but it was all a far cry from the 24/7 access we enjoy today.

So, when European football beckoned for City it was the stuff of dreams, not least because they were guaranteed to be midweek games! The agony of that final afternoon of the 1992/93 season, when we needed a point against Boro at Ayresome Park to make it happen, has never left me.

Thanks to a crazy 3-3 draw and nail-biting of extraordinary levels it was job done, and preparations for my own European tour were underway. Expectations weren’t too high – it could have only have lasted one home and away tie – but having suffered the crushing disappointment of 1985, thanks to the tragedy of Heysel, the prospect of missing out again wasn’t even a thing.

As it transpired, there were worse ties get in the first round than Vitesse Arnhem, even though the Dutch included a smattering of names who would go on to become the household variety.

Oddly, the home tie, City’s first ever in European competition, was played out in front of precisely 16,618 supporters – a far cry from the 26,000 plus who fill the old girl nowadays – but it was thrilling nonetheless and three goals in 21 second-half minutes effectively killed the tie stone dead ahead of the return leg.

But it was the second-leg when the adventure really began, even if we were all hoping the game itself would be a formality. Our first European foray.

Most of the travelling hoards – possibly all of them – took the opportunity to travel with Club Canary; an arduous trek across mainland Europe that a mate famously described at ‘around Europe in 80 days with Cabbage’. He wasn’t kidding.

A gruelling, bum-numbing journey that began the night before the game – departure time conveniently coinciding with pub chucking out time – and ended a good 15 hours after the final whistle, was punctuated with a little bit of football that saw City grind out a hard-fought 0-0 draw and a passage through to the next round.

That a similar ordeal is now used as part of the Special Forces recruitment process gives you some idea of its attritional nature.

With the numb bum lasting several days, it was no surprise that when we drew Bayern Munich away, my fellow group of travellers opted to give Club Cabbage a swerve and instead – and I have no idea how or why – we booked our trip through a private tour company who’d hopped aboard the Norwich City bandwagon. Little did we realise at the time, but British Airways it was not.

The company offered the option to travel either by plane or bus – something of a no-brainer given the Cabbage/Arnhem experience – and so it was to Stanstead we headed in order to board what we’d hoped would be a normal passenger plane.

Instead, we boarded a contraption that was one step up from a Fokker D.II biplane, complete with a seating arrangement that was more ‘9:15 – Norwich to Liverpool Street’ than ‘BA117 – LHR to JFK’. Man it was weird, so too the engines on the wings that rattled, vibrated and smoked.

But we made it, and in time for an afternoon exploring a bierkeller or two.

That City’s finest hour was hazily observed through some beer goggles is to my eternal shame. In terms of regrets – and I’ve had a few – it’s right up there with choosing Business Studies ahead of Journalism and having that final drink in a Manhattan bar in 1995, but I do recall seeing Gossy’s volley fly in from about a quarter of a mile away and Chippy Crook floating in a free-kick that bounced once before being headed home by Taffy Bowen.

I can also recall Christian Nerlinger pulling one back for the Germans just before half-time and City, thanks largely to Gunn senior, surviving a second-half onslaught to take a 2-1 lead back to Carrow Road.

Luckily, I was also able to remember (and participate in) the impromptu party that broke out in the hotel bar once we’ve made our way back to the Munich hotel that was home for the night. Many other City fans were also using the same establishment – predictably more Travelodge than Hilton – and so it made for a fine late evening.

By the time the Bavarians pitched up in the Fine City, 15 days later, the faithful had finally latched onto this European football lark. From a vantage point in the Upper River End, Dad and I witnessed, along with over 20,000 others, Bayern taking an early lead before Gossy, again, feeding off Chris Sutton’s flick-on to make it 1-1 on the night and 3-2 on aggregate.

And then it was Inter Milan time.

For the home tie, Dad and I struggled for tickets, work in Lowestoft denying us both the chance to join the Carrow Road queues. Instead, it was my dad and his ability to ‘queue’ for hours on the club’s antiquated ticket hotline that finally secured us tickets in the very back row of the Upper Barclay – from where we observed Rob Newman upending a flying Italian in the 80th minute and Dennis Bergkamp scoring from the spot. We headed to the San Siro in need of a two-goal win.

This time however the club excelled itself by chartering flights – in proper passenger aeroplanes – from Norwich to Milan, ensuring the Yellow Army travelled (almost) as one for the second leg.

The sight and sound of Norwich Airport – a less slick version than the one travellers use today – bursting at the seams that morning while trying to process what felt like thousands (but may have in fact been hundreds) will linger forever in the memory.

It mattered not though that organised chaos prevailed because any angst was well and truly over-ridden by anticipation and excitement. The great and the good of club and city travelled alongside the great unwashed in the ‘convoy’ of planes, as did the players’ wives and girlfriends (a good decade before they officially became WAGS).

That I was sat just a few seats away from Mrs Gunn and Mrs Culverhouse on the plane merely added to the surreality of an unforgettable day.

The day itself was the Italian equivalent of a Bank Holiday, meaning kick-off time was curiously in the afternoon. In turn, this meant that between attempting to find bars that would happily accommodate large groups of English football fans – not an easy task in 1993 – we also had time to wander through the oddly deserted shopping district of Europe’s style capital.

Suffice to say, the WAGS fitted in rather better than the rest of us.

When game time arrived, the San Siro resembled Munich’s Olympic Stadium when Norwich City are in town, in that it was disappointingly less than half full.

The game itself followed a similar in pattern to the first leg, with Inter epitomising Italian football of the 90s with their take on professionalism – but I can vividly recall Efan Ekoku spurning a great chance to pull City level right in front of the massed Y’Army.

Alas, it wasn’t to be, and it was bloody Bergkamp again who hammered the final nail in our UEFA Cup coffin with a second-half goal that formally signalled the end of our ‘participation’ (one for the Ipswich fans).

However, the singing at the end from the travelling hoards as the San Siro emptied lived long in the memory; so too the swapping of shirts and scarves with the remaining Milanese.

Little did we realise though at the time it would be our one and only taste of Europe; the departure of Mike Walker a few months later, and the resultant relegation consigning City’s UEFA Cup ambitions to the annals of history all too quickly.

For the record, the journey home from Milan wasn’t without its dramas either; some horrendous weather over East Anglia meant the pilot only landed the plane on his third and final attempt before being diverted to God knows where.

Once safely on terra-firma, the European tour was rounded off appropriately with Mike Walker and the players greeting and thanking the fans as they made their way through a still shell-shocked Norwich airport – naming no names but there were a couple oddly limp handshakes.

Walker’s rallying cry of “Let’s make sure we do this again” was inspiring at the time but his departure followed by a horrible time that ended with the crumbling of the Chase regime unfortunately rendered them just words.

But what followed shouldn’t ever detract from what were a truly memorable couple of months. As I’ve inadvertently demonstrated above, for the few hundred of us lucky enough to have been part of it, the stories will be dined out on forever.

All of which makes this Sunday’s City Legends V Inter Forever match a perfect chance to rekindle those memories.

In the hours that followed the win in Munich, the aforementioned party was memorable for many things but, for me, two words spoken by a gent behind me while queuing at the bar have stayed with me forever.