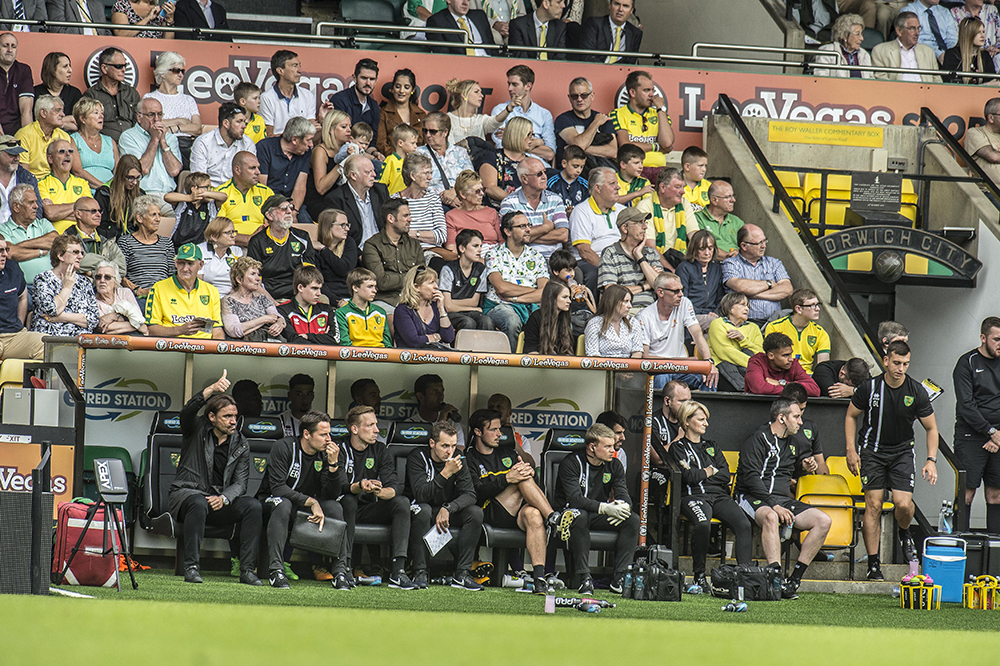 In part one of three, Andy takes one final look back at the stats of last season…

As regular readers will know I love a bit of analysis. And as year one of the Farke era has drawn to a close, we aren’t going to rip the plans up and start again as we did last season, so I think it’s important that we look back at the results of last season to see what we can learn in order to improve the Farke blueprint for the season to come.

You may, or may not, recall that last off-season I did an analysis of Ivo Pinto’s defending by looking at the roles he played in the goals we conceded in 2016-17. This appeared to be well received, and so this time I’ve extended the analysis.

I’ve examined every goal scored or conceded by City in 2017-18, and looked at which players were involved, either positively in terms of being involved in the creation of execution of one of our goals, or negatively in being wholly or partially responsible for a goal conceded. From there we can look at which players are key for us at either end of the pitch.

I dislike assists as a metric purely because it only involves passing the ball, however simply or perfunctorily, to the player who scores, and takes no account of whether that pass was key to the goal, whilst also ignoring other important work that may have taken place in the build-up.

Take for example, Tom Trybull’s goal against Middlesbrough. He smashed a long-range winner into the bottom corner from nowhere. The credit for the goal should go solely to him yet in an assist-based system, Tettey, who played a five yard sideways tap to him would receive some partial credit. My system takes into account the entirety of the goals set up, so in the case of Maddison’s winner against Bristol City at Ashton Gate, the sublime crossfield ball by Vrancic to release Pinto for a simple pull back to Maddison to score gives him a partial credit for the goal along with Pinto and Maddison.

It’s by no means intended as an indication of quality in its own right. The system is weighted too heavily in favour of strikers and attacking midfielders at one end of the scale and too negatively against defenders and goalkeepers at the other to be even remotely fair from that perspective. It also doesn’t allow for much insight into deeper-lying midfielders as they rarely get too involved in the penalty areas, but that doesn’t make their role any less important, as we’ll come to in another article that I’m currently putting together.

It’s also fair to note that in terms of conceding goals, it’s not a simple blame game. I’ve also allowed for times when the other team have simply produced good play or an absolute worldy that our defending isn’t solely to blame for (10 occasions). There are times when we’ve been the victim of bad luck, whether it be a well-won tackle that lands unfortunately at the feet of a striker, or the ref in the Hull game conjuring a penalty out of nowhere (8 occasions). I’ve allowed for occasions where no one individual or even combination of individuals is to blame and collectively the team have been lazy or switched off and that has been the sole or partial reason for conceding (21 occasions). And lastly, the times our tactics or lack of organisation have cost us dear, so some of the responsibility lies with Daniel Farke and his coaches (10 occasions).

Without further preamble then, the stats: 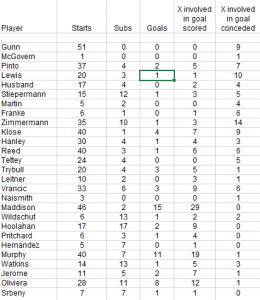 So, what do the stats tell us?

Overall, I found out some information that surprised me, some that reaffirmed what I already thought, and some that left me hopeful for next season as you could see the improvement of many players over the course of the season.

A rest followed by a full pre-season will continue the embedding of Farke’s philosophies, and the likes of Srbeny, Hernandez, Raggett, McLean, Buendia and Godfrey will benefit from seeing how the likes of Vrancic and Zimmermann have been able to adapt over time into quality Championship performers. Now if we can just get the crowd to believe too…