In my last article I looked at the goals that Norwich scored and conceded last season which gave us a glimpse into who is helping create goals and who was responsible for letting them in. Now it’s the turn of the defensive midfield area: The Engine Room.

Three in the midfield was used right at the start of the season as Farke was still finding Maddison’s true role and was quickly discarded as Maddison pushed himself into the number ten role that he would go on to play in for the rest of the season.

Next Farke moved on to a 4-1-4-1 formation which was what he had previously employed in Dortmund and which we had expected him to import to us.

The figures on the success of this look better than they are. Only one win was achieved in the Championship with this formation, an early 2-0 win against a QPR side that were pretty poor. The other two wins were in the league cup against lower league opposition at Carrow Road. Four goal thumpings at Villa and Millwall fully exposed the problems with the system in this league, with Harrison Reed looking traumatised as he ran around large swathes of midfield on his own trying to stem a tide of onrushing opponents. 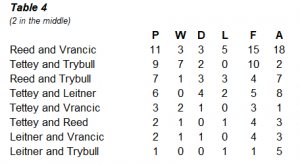 The vast majority of games were played with two defensive midfielders shielding the back line and starting moves off from deep. It doesn’t take a statistical genius to see our strongest pairing from the table above. Tettey and Trybull, hampered by injury, started only 9 games together, but those games produced 7 wins, 2 losses and no defeats. In that time, we scored 10 goals and only conceded 2. Phenomenal record.

Reed and Vrancic started the most games together and their eleven games produced a middling record of 3 wins, 3 draws and 5 defeats. The next most popular pairings Reed and Trybull (7 games) and Tettey and Leitner (6 games) produced only one win between them. Gulp.

The individual statistics make for interesting reading too.

Whilst Tettey is clearly the most successful in the role with 10 wins and eight draws from his 22 games, Trybull is not far behind with 9 wins and 5 draws from his 18 appearances. Vrancic’s record is average, although this doesn’t take into account the games he played in attacking midfield.

The biggest surprise for me is Leitner whose starting record is pretty terrible. Played 9, Won 1 is not the record you would expect from a player that most fans are keen to sign permanently. I think it’s more of a reflection of how City stumbled over the finish line into 14th at the end if the season when he played all his games, than too much of a reflection on the player himself but it’s worth bearing in mind.

Overall the results are probably not too shocking. It’s clearly been Tettey’s best season for us, and we have looked so much more solid when he’s been in the team, which is why Stuart Webber felt the need to alter his original plan to let an ageing, expensive player go at the end of his contract.

Trybull is clearly the best option alongside him and keeping the two of them fit and able to play together will be the task facing the medical team next year.

The other consideration will be that Ben Godfrey, Tettey’s heir apparent, will be back and champing at the bit to take some game time from the incumbent. Farke will need to manage this transition carefully, as we have seen from the stats just how important it is to have Tettey on the pitch, and how much of a drop-off in results there is when he isn’t there.