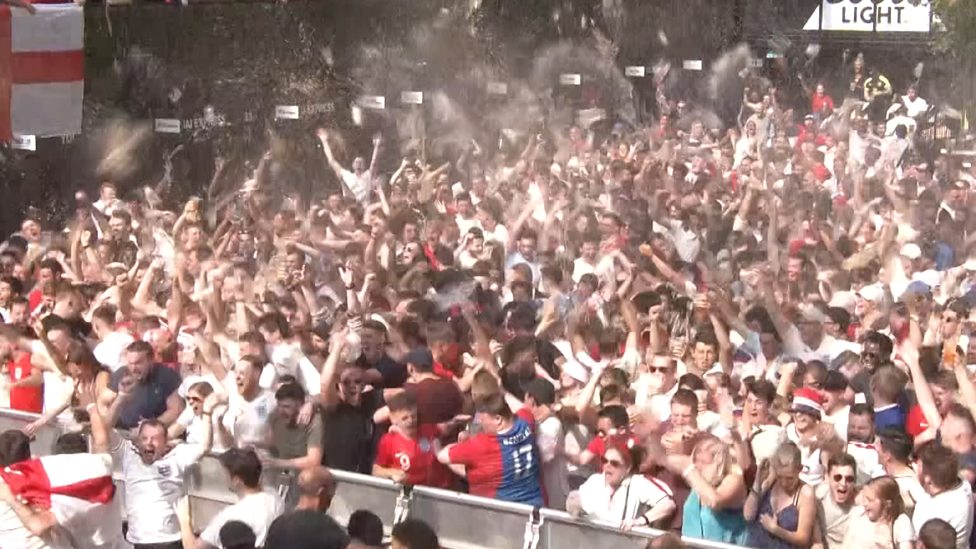 Around 60 minutes into the World Cup semi-final I knew we were going to blow it.

The missed chances of the first half were haunting us and Croatia had tweaked their formation. Alli, Lingard and Henderson no longer had the ball but spent their time filling space and trying to make it difficult for their opponents to pass through them.

Walker and Trippier couldn’t divide the task of picking up the impish Perisic between them. Tactically we had no answer. The bench held few solutions except like-for-like replacements.

As the inevitable unfolded, I began the various stages of grief. I was at acceptance a long time before the final whistle went.

The problem is I can’t seem to shift into moving on. I still feel an enormity of disappointment that is crushing and feels personal and raw which is ridiculous because this is a tragedy being played out for an entire nation.

At the final whistle, my eight-year-old son burst into tears. His mum and sister cuddled and consoled him through the snot bubble and panting stage that is regulation for boys of his age. Later, once the base emotion has been exhausted I spoke to him.

I tried to explain to him that defeats such as these make it all the sweeter when your team does win something. That he’s young and he’ll see England play in plenty more tournaments. That he’ll see Norwich win promotion one day. That it’s all part of the game.

He looked less than convinced.

In many ways, I can’t blame him. Last year was his first as a season ticket holder at Carrow Road and, barring Timm Klose’s last minute equaliser against Ipswich, he was given a paucity of moments of magic or home wins to convince him that football ever gives you a high to go with the lows.

His first international tournament has obviously had an effect on him in terms of his appreciation of football. The good technical play, the late goal drama, high-tension penalty shootouts, and the pleasing displays from England have all struck a chord, and you can see from the intelligence and the depth of the questions he’s asking that this has great meaning for him.

The downside of that, of course, is that when it becomes too ingrained it becomes personal, and then defeat hurts, like it is hurting right now.

He’s also from a different generation, one that is far more connected to the adult world than mine ever was at his age. Through social and general media, both mediums have raised expectations sky high over the past month. Every gurning C-List celebrity has been queuing up to assure anybody who’d listen that in their expert and informed opinion, football was indeed, coming home.

While I can give some credence to that opinion when it comes from Jose Mourinho, I’m less convinced by the musings of Kerry Katona. I’m facing an uphill battle to explain to him why all these people got it so wrong though.

Roy Keane and Ian Wright were arguing on the TV. Keane was doing his “intense is the only way to be” schtick and getting irritated at Wright and the English public for getting carried away with plans for the final and what they’d be doing on Sunday.

Wright was baiting him, full widebody act because he knew it enrages the hair-trigger temper of Keane. He was laughing, saying how positive the tournament had been and this juxtaposed with Keane’s grumpy demeanour, annoyed at the antics of a nation that’s not even his own, for jinxing themselves with over-confidence.

The problem is I’m with Keane.

The hoop-la of England having a team that wasn’t filled with sulking underachievers who had failed dozens of times before, matched with exciting early performances was too much. England expected. As soon as the draw opened up, the whole country was convinced not that we could win, but we would win.

As much as England’s players were geographically removed from this bubble of ill-founded belief, the world is no longer bound by the barrier of geography. They were all on their phones within an hour of matches finishing, joking on Twitter, or sharing selfies on Instagram.

So, they saw videos of eejits tossing beer and glass skywards as a shot bobbled off Harry Kane’s heel to break the tension of a five-goal lead against Panama to put us six up.

They saw Colchester town centre come to a standstill whilst citizens of the once-Roman capital wandered gormlessly among its main roads like a zombie herd (albeit an undead apocalypse that was obsessed with carrying around armfuls of Strongbow Dark Fruits).

They also saw the unfettered certainty that abounded from all corners that it WAS coming home. Unquestionably. And when Croatia changed formation and subsequently equalized our belief drained.

This wasn’t part of the script. Luca Modric was right in his post-match interview. And for all Roy Keane’s charmless crankiness, so was he. We underestimated Croatia, and we underestimated the challenge of a World Cup semi-final.

This is not a dig at Gareth Southgate or any of the players by the way. They performed admirably throughout. And short of encasing them in concrete and only breaking them out for the matches, it was impossible not to get caught up in the hype from back home.

As I checked social media my Keane-esque bitterness heightened. Facebook seemed full of people who never watch football usually, parroting platitudes they’ve heard on the TV. Even people whose opinion on the game I respect were saying positive upbeat things while I remained in a pit of despair. I feel like the teenager whose parents have recently separated, seeing his mum bring home a new boyfriend and wanting to snidely comment, ‘well you moved on rather quickly…’

My sole offering on Twitter was simply a stream of consciousness and was constructed of more uses of an “F” than Joey Essex’s school report.

The next day at work was no better. In every office across the land, there’ll be a Sandra or Barbara who don’t follow football who made it their business to make a B-line for one of the “football guys” and ask if they saw the match. In our office, I was one of those guys.

My inner demon sits on my shoulder and wanted to give a sarcastic ‘No, was there a game on? Do tell…’ but instead, I mouthed a few trite nuggets of cod punditry that I thought would satisfy her and make her leave me alone.

I was thinking… ‘Oh Jesus, Barbara. Don’t do this. Don’t spew your guff at me. Because although I’ll probably smile and make more perfunctory sounds, I can’t guarantee it today. I can’t guarantee that when you try and ram your cr@p in my lugholes I won’t attack you with the hole punch and selection of lemon-scented screen wipes that are on my desk. The world doesn’t need to know what you think Barbara. Not on any subject really, but particularly this subject at this time.’

The moment passed. Barbara’s thoughts were limited to how we’d all be cheered up if we had a biscuit, and as she reached for the tin with her hands unpierced by a hole punch and popped up a custard cream in her mouth, (mercifully free from a rolled-up screen wipe), I was offered a chocolate finger and I did feel mildly better.

And at that point, I had an epiphany. I understood why I couldn’t shake this funk. Why I seemed to feel this latest disappointment more sharply and individually than seems reasonable.

I was just a kid last time England made it to a World Cup semi-final. I know how rarely these opportunities come around. And this opportunity was as good as it gets:

Chances don’t come around like that every tournament. Who knows if we’ll ever have that chance again? I might never see it happen in my lifetime.

Being a Norwich fan, I’m resigned to the fact that barring a revolution against capitalism I’m never going to see my team compete for major honours. The lightning of Leicester City doesn’t strike twice. But with England there’s a chance, a tiny chance, that a team I support could win the big one.

And I’m bitterly disappointed they couldn’t do it. Even the realisation that this is the route of my melancholy can’t diminish the abject, soul-crushing ennui or the yearning to rewind the clock to 7:10 on Wednesday evening and let them have another go at winning that bloody game. And while I expect the keenness with which I’m feeling this disappointment will ebb over time, it will remain.

We were so damn close…