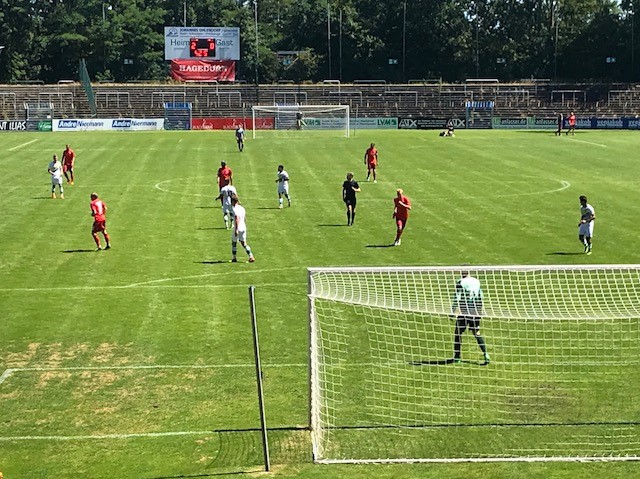 It’s not often we’ve been able to say that MFW has gone on City’s pre-season tour (and technically we still haven’t) but thanks to the Bowles family – Andy, Sharon and their son Jacob – we have three intrepid reporters on the ground covering this season’s German adventure.

It goes without saying how grateful we are that they’ve agreed to share their experience with us. And so, without further ado, here’s part one of their diary…

Pre-season games are often soulless affairs as players work off their fading memories of Dubai and prepare themselves for another hard season of domestic football. “It’s all about the minutes”, the “hard yards”, that’s what we are told.

In Germany they call them “Test Matches” which is probably a better description: hours of nothing happening with the odd flurry of excitement thrown in here and there.

You can’t learn much from pre-season games although sometimes the odd clue is revealed like the thunderstrike by newbie Elliott Bennett at The Ricoh, which had a Premier League reprise at White Hart Lane.

We haven’t been to an away pre-season fixture for six years, the last being a truly awful afternoon at MK Dons. So why bother this time?

Well, there are lots of reasons, both football related and personal, but mostly personal. Jacob, our son, is 23, autistic and suffers from chronic anxiety. Not just worries or fears, but the sort of anxiety that put him in hospital twice last year.

Such anxiety is not uncommon in autistic people because, we are told, their brains are wired differently.

Jacob’s autism means he can instantly recall any City game played in the last ten years, casually reciting scores, scorers, times of goals, team line-ups and referees as if the games had been played yesterday. He can also list out the careers of all squad players in the Premier League and Football league and has committed most of the UK’s major road network to memory, getting us home from away fixtures after the inevitable evening road closures leave the Sat Nav scratching its head.

We are London born and moved to Norfolk in 2005. Shortly after moving to Norfolk, Jacob began to develop an interest in football and started to follow the fortunes of Norwich City on the radio and local press. While he was keen to attend a game at Carrow Road, as he suffered from chronic anxiety, agoraphobia and was sensitive to noise, this seemed to be an impossible ambition.

However, in November 2007, we approached the club to see if there was any way Jacob could attend a game for his 13th birthday. The NCFC disability officer was very helpful and on 24th November 2007 Jacob watched City beat Coventry from behind the glass in the Ability Counts stand.

He loved the experience and has only missed one competitive fixture since. It is fair to say that being a City fan has changed his life. 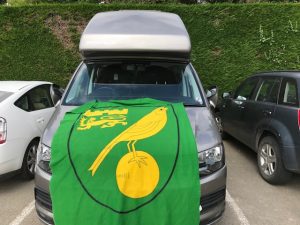 So, this German trip marks a huge achievement for Jacob, taking weeks of preparation and coaxing. We packed our VW Westie campervan (called Wes, of course) full of baked beans, football shirts and toilet rolls in true expat style and set off on Thursday, pausing briefly on the M11 to flick V signs at Airforce One as it flew overhead.

The nearest we will get to a US President, and it has to be Trump!

A great journey followed with a seamless arrival into France by Eurotunnel. We stayed overnight in Calais and made our way through Belgium, arriving in Germany on Friday. Actually, it was hard to tell if we’d crossed the border, as the Norfolk/Suffolk border is better signposted.

We are writing this report from our base in a beautiful location in the Eifel National Park close to the Belgian border, the plan being to take in City’s fixtures and then tour Germany for another week.

Sunday was game day! It had the feel of a proper away fixture although the three-hour drive on the fantastic German Autobahns was far better than your average trip along the A1 to Middlesbrough. 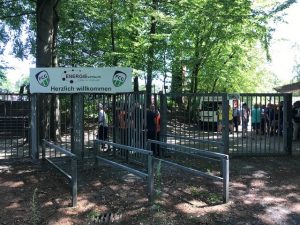 The Energieversum Stadion is a small ground in a residential area. Think Norwich United and you have some idea of its size. It has an appealing wooded area car park and we were thinking at one point that we were in the car park at Latitude Festival.

We were not sure we had the right venue, then we saw a smattering of yellow shirts, including that of the Incorrigible Lil, current holder of the Norwich City Fan of the Year trophy. At the turnstiles, we were offered a choice of seating or standing (HM Government take note).

Being hard-core we opted for the standing areas despite the searing midday sun. We took up our positions on the sun-bathed terraces behind the goal, close to the array of NCFC flags draped over the crowd control fences, then withdrew to where most of the locals had chosen to stand under the shade of the tree-lined perimeter. It was, after all 30 degrees on the pitch at midday.

Only mad dogs and Englishmen… 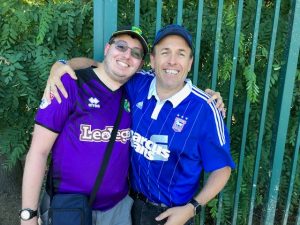 The first thing that caught our eye was an Ipswich Shirt! WTF? WTAF? Here we are on a City pre-season in Germany with about 50 City fans. Is this someone’s idea of a dare, or are they really that obsessed with us that they would travel hundreds of miles to watch us?

He turned out to be Kevin, a nice bloke from Lakenheath who lived locally. He was a Paderborn and Ipswich fan (he was wearing the Paderborn hat to prove it). He took his place on the half-way line to assorted greetings from the Norwich crowd. To be fair to him he took the banter/abuse well and gave us a bit of a laugh. We had a good chat with him post-match about their prospects for the season. (He’s not too optimistic).

Back to the match, this was our first game as “football reporters” so, being professional and all that, as we kicked off we thought we should check our phones were okay, so we didn’t miss anything… Can’t get a signal … oh bollocks they just scored. In true Kammy style, ‘no idea what happened Jeff’. 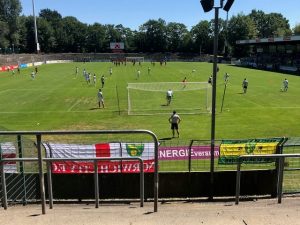 Ah well, we soldier on. We start tweeting updates to City fans at home desperate for news about the new signings. “How are they set up?” we’re asked. “Flat back four- Husband, Klose, Zimm and Marshall”. Sir Benny up front on a deck chair eating an ice cream (may as well have been for his involvement in the game for the first half) … oh b*ll*cks they’ve scored again. ‘Sorry again Jeff’.

It occurred to us that actually, this reporting lark is a bit tricky. How do they watch and write at the same time?

Much of the first half saw Paderborn marauding down the wings, mostly hassling new boy Ben Marshall who looked like he definitely needed some more minutes and, more urgently, a breather. I suppose that Paderborn had decided pre-match to concentrate on the wings, ignoring the fact that at times, the gap between Klose and Zimm was so large that they could only communicate by “handy” (German for mobile phone) with Super Tommy Trybull patrolling the gap looking for someone to kick.

Half time – 2-0 Paderborn, although it should have been 3 or 4. There was a decent shout for a City penalty on about 35 mins but that was mostly from the three of us who had an obscured view from the other side of the ground. Probably not a case for VAR.

The Paderborn fans around us were in good spirits although placing their wheelchair users pitch side right next to the sprinklers probably wasn’t the best idea. The half-time dousing they received looked to the casual observer like the worst form of crowd control measures ever.

Second half changes meant that Sir Benny had a partner up front. Our new guy Teemu Pukki who, from the stands, looked a bit like the ghost of Steven Naismith or perhaps that bloke off East Enders who played in Jamie’s game a few years back. But what a difference the changes made.

City upped their game and attacks came thick and fast. The Germans around us started to get nervous then – BOOM. 2-1 from the right honourable Sir Benny. Another from Pukki and then another prompted a chorus of “2-0 up and you f*cked it up” from literally three City fans. So it ended.

“A good test match, yeah?” remarked a beaming German fan who had kept us entertained during the second-half with a never-ending array of stats from the Bundesliga from the 1970s onwards. But yes, it actually was a good game.

So, what to make of it all? You can’t learn much from a pre-season game, it’s all about the minutes etc, etc… But, when we played two up front, we looked fantastic. Sir Benny/Pukki? Rhodes/Pukki? Probably the latter.

Hernandez looks lively and Tommy looks dead keen for the season to start. However, if there is one thing we can take from this is that we need a new keeper. Remi doesn’t look ready or, perhaps, good enough to make the leap up to the Championship.

It would be such a shame if he had to move to Australia and change his name after the first league game, but I doubt if Farke and Webber will put him in that position.

Then, back to the campervan for the three-hour journey back to base. A Jurgen Klopp lookalike was sat in his car next to us in the car park, working on his laptop. Scouting for Dortmund? Filing a match report for Die Welt? What’s German for “It’s all about the minutes”?