I can’t ever recall feeling envious of those who’ve travelled overseas to watch a City pre-season tour. In truth, I usually tend to give all pre-season games a swerve for the reasons stated so eloquently by Connor in his piece yesterday, unless it’s a game on my doorstep.

But this summer feels different, and for that, I have to thank the wonderful Bowles family – Andy, Sharon and Jacob – whose three-part travelogue of the German tour has given an insight into tour life on the continent almost like no other.

Clearly, as MFW editor I’m biased, but seldom can I recall a series of MFW blogs being so well received, especially when you consider the games they covered, certainly in terms of results, were largely meaningless friendlies. But it wasn’t really about the football at all – it was so much more.

And not only did it confirm what fine folk the Bowles family are, but other characters emerged with reputations enhanced. The club too.

I’m not sure there are many out there who make it their business to include their travelling fans in quite the same way City did on this tour. Of course, it’s easier to engage in the intimate surroundings of small stadiums with few supporters and no points or trophies up for grabs, but still, I’m unconvinced others would go to the same lengths.

Gareth Southgate’s England, in fairness, started the fan inclusivity ball rolling in Russia but City have taken it to another level. The selfies, the chats, the winks, the acknowledgements, all add up to a feeling of togetherness that’s been absent at times in the quite recent past but is now at its peak.

We had Mo Leitner sending personal video messages, Daniel Farke recognising fans from previous games, Timm being Timm, Jordan Rhodes making it his business to embrace yellow and not blue, Tom Trybull giving his shirt to a youngster and then the fans being invited to watch the team train.

All of which adds up to quite a harmonious little ship right now – all of it, let’s not forget, underpinned by directors who have travelled with the squad on this trip and who sit with, chat to and offer their time to the travelling supporters.

And that’s probably the element that sets us apart from others.

Those who read my Sunday columns regularly (cheers Mum) will know my feelings on Michael and Delia and their reticence to look no further than their nephew Tom to safeguard the future of our club, but there’s no debate to be had around the love they have for it and its people. 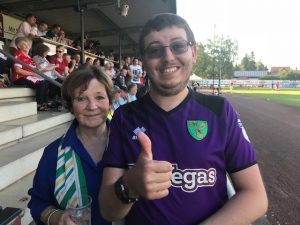 So, when I inevitably rant over ownership during the upcoming season’s fallow periods, I will try and picture Delia huddled alongside those City fans in a creaking German stand/shed and compare that image to owners who oversee their football investment from a 54th floor Midtown Manhattan tower block. I’ll try.

I guess the only serious question mark to have arisen from the tour is around the goalkeeping position. I have no inside knowledge but following his heroics at Plymouth last season and at Hamilton the season before, I imagine Farke and Stuart Webber were hoping Remi Matthews would excel in pre-season to the extent they had no decision to make over their number one.

Unfortunately, that hasn’t happened and it may be no coincidence that it was Michael McGovern between the sticks for the most prestigious friendly of pre-season.

Equally, it may be a herring rouge and both are simply being given game time but either way, there remains apparent uncertainty over who will have the shirt at St Andrew’s – which is a shame.

Yet those who, following a couple of errors, deem Matthews ‘simply not good enough’ are jumping the gun. That Plymouth would have him back in the blink of an eyelid speaks volumes, and he wouldn’t be the first City keeper to make the odd howler before becoming a shoo-in for the no. 1 jersey.

Ultimately, my own feeling is that it won’t be his shot stopping and/or command of the penalty box that determines whether or not he starts against Birmingham. I happen to think he’s pretty adept at both given the noises from Plymouth and Hamilton. Instead, it will be how good (or otherwise) he is with the ball at his feet that will decide his fate.

Angus, on top of being a fine goalkeeper, was great in the role of fifth defender and had the first touch of a classy centre-back. He was also able to ping the ball 50 yards onto a sixpence. In the current set-up, both are equally as important as tipping shots around the post or plucking a cross out of the air.

I suspect if Remi can prove to Farke and Webber he can do all of those things the gig is still his.