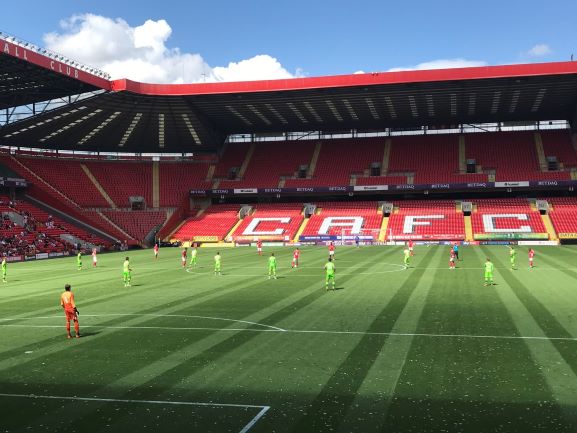 As away grounds go, Charlton has to be one of my personal favourites (even if the away end is rather basic). The continuous “bowl” wrapping around three sides makes it a proper ground – the product of Premier League dosh and seven consecutive top-flight seasons in the early 2000s.

Better times and, undoubtedly, better owners – when Charlton were held out by many, as “the model” medium-sized club to follow. Ironic then that City did just that – relegated to League One together in 2009!

The sight of just 2,110 fans – 529 from Norwich – for the final pre-season game, is more a reflection of current times at the Valley, but enough about them.

Personally, I’ve never been a great fan of pre-season. If I hadn’t already been in London for the Supporters Direct AGM, I very much doubt I’d have bust a gut to wander down to SE7 for 97 minutes of indifferent football.

This wasn’t a great game.

The first half, when City lined up with a 4-1-4-1 formation, was particularly hard to watch.

Neither full-back offered much. The diminutive Felix Passlack, on the right, failed to build anything meaningful with the advanced Kenny McLean ahead of him, while, on the opposite flank, James Husband did what James Husband usually does – nothing. Thankfully he was replaced at halftime.

The centre-back pairing of Grant Hanley and Timm Klose looked sluggish and vulnerable to both Charlton’s high press, which they operated effectively, and counter-attacking at pace.

Tom Trybull, as the midfield ‘holder’, was somewhat reminiscent of Harrison Reed this time year: hard-working but often completely overrun as Charlton flooded forwards on the counter.

The midfield quartet of McLean, Teemu Pukki, Moritz Leitner and Onel Hernandez had just one highlight in the first 45 – Onel. He looks, with the benefit of a full pre-season, everything a proper winger should: short, strong, nippy, direct, willing to run at players and cross a ball into the middle quickly. He’s everything Josh Murphy isn’t and, I predict, destined to become a crowd favourite.

Onel did actually manage to get the ball in the net around the half-hour mark, only for the assistant referee to raise his flag for offside.

That said, Charlton definitely had the better of the first 45; quick, incisive and creating the better opportunities, two headers in particular, which should have at least tested Tim Krul, rather than drifting over and wide.

The three substitutions at halftime were hardly a surprise, with Max Aarons, Marco Stiepermann and Ben Marshall all coming on.

Then, just as City were improving, around the hour mark, Charlton popped up the opposite end and scored, albeit with the benefit of a huge deflection, that completely wrong-footed Krul.

I was delighted to see Thompson, not only because of his dreadful injuries but, suddenly, City had a midfield enforcer, someone to get stuck in and make things happen.

Todd Cantwell and Emi Buendia were thrown into the mix a few minutes later and suddenly, City started looking like a team and actually mounted some pressure in the final third.

It had taken 80 minutes to actually look like the higher league opposition.

In the final ten, Buendia and Thompson combined superbly to set up Cantwell, whose decent shot was destined for the bottom corner, until tipped around the post for a corner.

Another great Phillips save followed from an excellent Godfrey header and was followed by double saves in quick succession, first from a Zimmermann header and then Cantwell’s dipping shot from distance.

So, it ended in defeat. A hugely non-descriptive 80 minutes followed by a late, encouraging flurry. The highlights, such as they were, was the performance of Hernandez, and the late cameos from Thompson, Godfrey, Buendia and Cantwell.

It was hardly stuff to set pulses racing in advance of the real action in a week’s time and two big questions remain for Farke:

Over to you Daniel.