Despite a glut of all things football throughout this World Cup summer, the arm hairs are already rising in anticipation of Saturday, August 4th. The day of fresh slates, new heroes and untarnished dreams yet to be rudely awoken from.

The City squad appears to be set, although I imagine there may be a Maddison or Godfrey-style prodigy that Stuart Webber is thinking of taking a punt on. His record, after all, would encourage such adventure.

I made my views on this particular incarnation of our boys in yellow known on Twitter. I think that it’s the most complete City squad I remember having going into a season. That’s not to say it’s the best, that would be ridiculous. But the depth in quality we have as a squad is seriously impressive. Options in every position. And viable options at that.

There’s no position in the team that I look at and think “Is that too weak? Don’t we still need a new signing there?”. Compare to when Alex Neil’s new boys arrived in the Premier League with only four centre-backs: Bassong, Martin, Bennett and Turner, who was promptly shipped off to Sheffield on a season-long loan, leaving only three. An accident waiting to happen.

So plentiful are the options that we’re all currently playing the guessing game: Who’s starting at Birmingham?

Whilst I’m not going to go all “Mystic Meg” over one game I think we’ve seen enough from Farke Vintage 2018 this summer to make some educated guesses about how he is intending to set up for the first few weeks and which players have played themselves into likely contention.

While City have played a lot of their pre-season games in a 4-1-4-1 formation, I think (and hope) that the formation will be much more fluid than last season’s often stolid and stubborn rigidity of form during the games. However, before I explain this further it would be helpful to use this as a base to slot in the likely starters.

In goal, it’s obviously Tim Krul. As an aside, even if Remi Matthews goes out on loan, I wouldn’t be hugely surprised if Aston Oxborough ends up on the bench ahead of Michael McGovern for a reasonable proportion of games simply because of the homegrown rule. In a world where they’re unlikely to be used anyway it’s an easy way to play the quota and it’s why Chelsea are picking up the likes of Rob Green.

At centre-back, Timm Klose and Grant Hanley are clearly ahead of the pack, short of an injury to either.

I don’t think Jamal Lewis has enough minutes in the tank to come into consideration for the opening games. James Husband looks out of favour, Marco Stiepermann more likely to be utilised further forward. Which leaves Max Aarons. Incredible as it seems, the Under-23’s right back, only awarded a pro contract in May, is probably favourite to start at left-back at this stage having been heavily and repeatedly used in the role in pre-season. Fair play to him.

Last season’s default right-back Ivo Pinto has no game time under his belt and appears to have lost his place along with the captaincy. If he does mount an unlikely comeback it won’t be for a while. Felix Passlack seems the obvious option although I question whether Daniel Farke will trust both he and Aarons to try and adjust to the pace of Championship football at the same time.

It may be that the impressive and experienced Ben Marshall is given the nod, but equally, with the quality of his delivery, I expect him to be pushed further forward. Whilst there could be a left-field choice like Ben Godfrey, my guess is that Passlack is the man most likely.

In defensive midfield, Alex Tettey’s illness leaves the role up for grabs. As impressive as Louis Thompson’s rehabilitation has been I don’t think he’s a starter yet, although even a spot on the bench would be a massive fillip for him and just reward for having travelled so far on his own personal journey. It’s basically a toss-up between Godfrey and Tom Trybull. Pick your favourite. My money is on Tommy T but there are a number of reasons why Godfrey may be the better choice.

Ahead of the defensive midfielder, there are likely to be two “number eights” as they are known on the continent. Essentially creative midfielders who also exercise strong positional discipline. Mo Leitner is a shoo-in here. With Mario Vrancic injured, Emi Buendia playing catch-up fitness wise (and possibly better utilised wide), the choice to play centrally alongside Leitner looks to come down to Kenny McLean, Todd Cantwell or Stiepermann, who has done well in a seemingly more comfortable attacking guise. I’d be very surprised if McLean wasn’t the choice.

On the wings, Onel Hernandez and Ben Marshall look to be the men most likely, with both having been highly productive in pre-season. Buendia, as mentioned, isn’t up to speed, Jarvis is nowhere near and unless there’s an unlikely call for Stiepermann or even Passlack I think Hernandez and Marshall will be the starters in August/September.

Up front, if fit, you would expect Jordan Rhodes to be the selection, with Teemu Pukki a more than capable second option and Dennis Srbeny increasing his education in Championship football as an option from the bench.

This would leave our 4-1-4-1 formation looking thus: 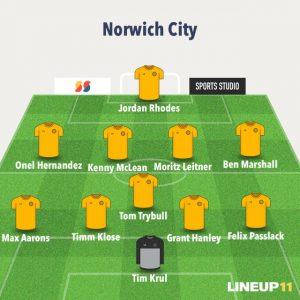 That’s what I expect our base formation to look like. For those of you who remember how comfortable we looked playing 4-1-4-1 at Villa Park and The Den, however, I think there’s sufficient evidence to say that Farke has learned from those dark days however, and, unlike then, he has the players available to switch to a Plan B.

So, while when we have the ball we will be more expansive, in the 4-1-4-1 formation, when we don’t, one of the central attacking midfielders (in this case McLean), will drop back in to help Trybull while the wingers will narrow. This will effectively revert us to the 4-2-3-1 formation that gave us defensive solidity last season (whilst limiting our attacking threat). 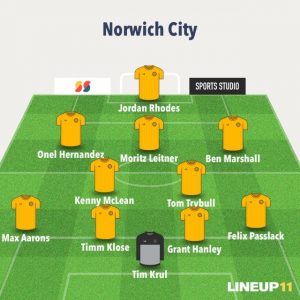 If we can manage the transitions from having possession to defending quickly, it also plays into another positive that we have this season. Having surrendered possession, an effective and quick press against the opponents would likely see our opponents using their fullbacks as the “out-ball” with our wingers drawn inside.

However, whilst last year we “made-do and mended” on the wings with Josh Murphy often pushed up front, and the likes of Vrancic and James Maddison deployed wide in uncomfortable fashion we now have players like Marshall, Hernandez, Buendia, and Passlack who are both fast and aggressive and will look for situations like this as an opportunity to win the ball back and reverse the transition. At the very least they will harass and harray the full backs into mistakes.

There is a third option that has had an outing pre-season and one which again, can be utilised with the personnel from the base 4-1-4-1 formation. It’s a very attacking 4-1-3-2. In this formation, Hernandez would join Rhodes up front to use his pace more centrally. McLean, Leitner and Marshall would then probe behind them. It’s likely this would be the call if we were chasing the game and you’d expect the likes of Pukki and Srbeny to be added to the mix at this stage also.

Obviously, during the course of the season we’ll play three at the back on occasion and the emergence of players recovering from injuries such as Buendia, Tettey and Vrancic will mean adaptations. But from reading the pre-season tea leaves I’d be surprised if we didn’t set our stall out for the first month or so combining the three formations above.