Football fans will soon be waking up with that familiar buzz that signals the start of a new season.

Up and down the country (and further afield), pre-match rituals are set to be renewed and new shirts given their first proper outing, as football is set to take over our lives once again.

Slates have been wiped clean and there’s a sense of anticipation, curiosity and hope; the hope that new signings will justify their transfer fees and become the pieces of the jigsaw that lead to it being ‘our year’.

By 5 pm on Saturday, regardless of what happens at Birmingham, the familiar debates will begin again.

There will be calls for patience and talk of transition and projects.

There will also be those who overlook the fact that their glass is constantly half-empty because they’re too busy having a moan about the glass itself.

Discussions on formations and team selection; worldies and howlers; ownership and investment; and dodgy refereeing decisions are set to continue until next May when three teams get promoted and three go down.

But which teams will they be and will City be amongst them? 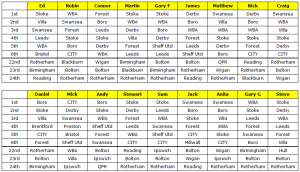 Undeterred by a World Cup which threw up more than the occasional upset, when it comes to promotion, we’ve not looked too far beyond the teams that sit high on the bookies’ lists of favourites.

And for good reason, as unlike tournament football, the 46-game slog that is the Championship, tends to sort out the wheat from the chaff.

The sides who were relegated from the Premier League are strongly fancied but, as always, their fate relies on using their financial advantage to identify and retain the players who are up for a different challenge whilst avoiding a relegation hangover.

In Gary Rowett, Stoke has a manager who switched from fellow promotion hopefuls, Derby, and who brings Championship pedigree and experience. They are also responsible for one of the more bizarre summer transfers with Benik Afobe switching to the potteries 10 days after finalising a permanent move to Wolves.

Rowett’s replacement at Derby, Frank Lampard, will be hoping to match, or better, last season’s 6th place finish and has already used his links with Chelsea to bring in highly rated youngster, Mason Mount.

Of the other teams remaining from last season’s top 6, Middlesbrough go into the season with their final parachute payment and with Premier League suitors circling for prize-asset Adama Traoré, so face the dilemma of going for broke or beginning to restructure the club’s finances.

Aston Villa also have one year left on their parachute payments but had already spent it and appeared to be heading into a financial and sporting abyss, before their stricken owner, Dr Tony Xia, sold a controlling stake in the club to billionaire businessmen Nassef Sawiris and Wes Edens. Reports indicate that the pair have engaged with ‘super-agent’, Jorge Mendes, who played a significant role in Wolves’ success of last season.

Whilst it was funny laughing at Villa, it’s been even funnier laughing at Leeds. However, the appointment of Argentine, Marcelo Bielsa, who has previously managed at both Marseille and Athletic Bilbao, might just bring a change of fortunes to the self-declared, ‘Champions of Europe’.

Another former ‘CoE’, Nottingham Forest, who finished a lowly 17th last year, have been busy in the transfer market, with Aitor Karanka adding the familiar names of Michael Dawson, Costel Pantilimon, Jack Colback and a certain Lewis Grabban to his squad.

At the other end of the table, Bolton and Rotherham are short-priced odds for relegation, meaning that Norwich loanee, Sean Raggett, is surely in for a ‘busy time’ at the New York stadium in South Yorkshire.

Third favourites for the drop are none other than (….drum roll….) Ipswich Town, with the bookies seemingly less than impressed by the appointment of Paul Hurst as successor to Mick McCarthy.

But what of Norwich City?

7/1 for promotion and 12/1 for relegation, suggests a finish somewhere in the top half, but shy of the top six.

Unless of course, you write for My Football Writer (or at least those from the glass-half-full side of the team).

Eight of us, are predicting a place in the playoffs (or better), with the award for ‘Optimist-in-chief’ going to our Mick Dennis.

After Mick submitted his predictions, with City proudly claiming top spot, he was met with a reply that simply read “that’s the spirit”.

It’s not clear whether that spirit was vodka or gin, but let’s hope that we find ourselves on the Castle Mound next May with something fizzy and sparkling, as we toast a bus-load of Germans waving a trophy at us.

Thanks to all the regular readers and contributors to MFW, who have submitted their own predictions so far. We can’t promise any prizes (although a bacon roll was previously on offer) but it is free to join and what price could you put on the glory of being crowned MFW’s champion tipster?

If you’d like to add your predictions into the mix, please do so in the comments section below.

We’re all Norwich on Sunday now though aren’t we? 😂 #nufc #afc #ncfc #thfc

On your Neck, City!@OnYourNeckCity·
47m

For the penultimate time this season, we podded and it was awesome.

@afcb_r0b If us #ncfc reacted like this after every loss the rate of strokes and heart attacks in Norwich would be off the charts. It’s a game, important, but not that important. That reaction is saved for when something real is threatened.