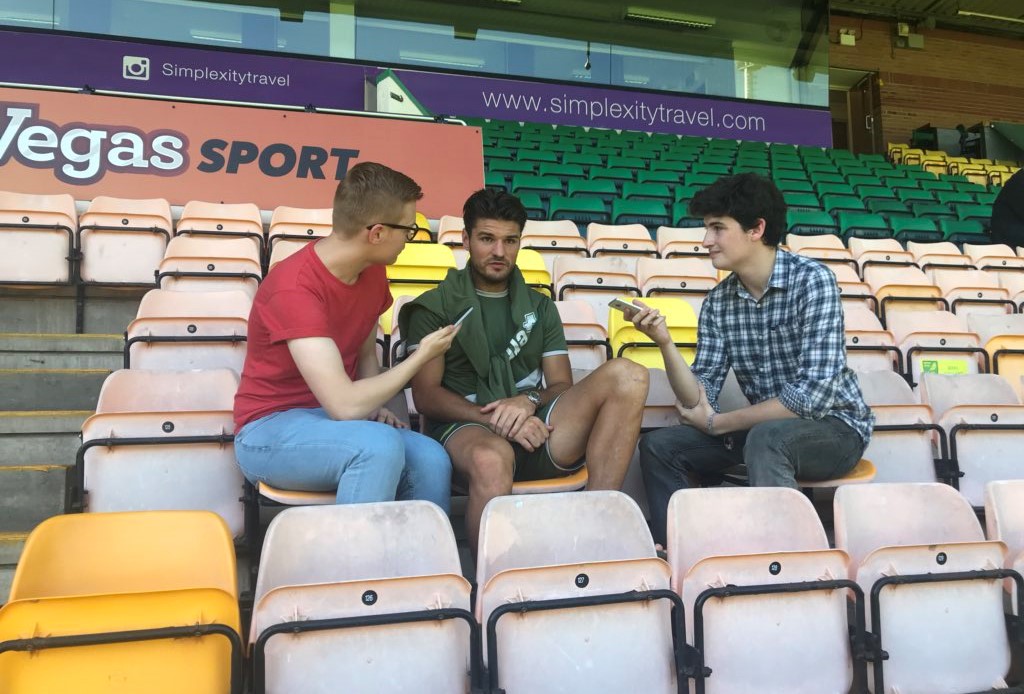 On a blissfully warm August day, standing on the pristine Carrow Road pitch and watching on as a host of representatives from the club and Woodforde’s Brewery smile for the cameras at the official launch of the newly-sponsored Barclay, it’s hard not to think that everything is well under control at Norwich City.

Of course, it’s not indicative of those 16-hour away days, watching a goalless draw in the driving winter rain, or the glamour of a Tuesday night in Hull – all that’s still to come. 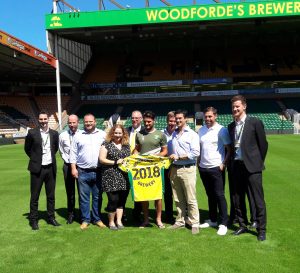 But for now, it’s reassuring to watch Ben Marshall pose for a photoshoot in his flip-flops as Grant Holt, complaining that he can’t possibly be photographed with an untouched pint in his hand, stands next to him.

And, as I got a chance to speak to both Marshall and Holt, it became increasingly clear that the coming season could be sunny for City.

The club’s new signing was keen to draw comparisons between his new side and the teams he spent last season with – runaway Championship winners Wolves and surprise package Millwall.

He said: “I think, being at Wolves at the start of pre-season [last year], the lads struggled a bit with the way the manager wanted us to play. It was a bit like, ‘can we do it?’ And then, obviously the first game of the season you could see the quality they brought in and you could see it was going to be a good season.

“At Millwall, I think the fans and the players can say they probably did overachieve, but at the time we just couldn’t get beaten and the team togetherness and the club as a whole was brilliant.”

Marshall, who appeared 22 times for Wolves and Millwall last season, winning 14 games and losing just three, can see similarities between Norwich and both clubs.

“I’ve been really impressed with the way the manager [Daniel Farke] wants us to play and how he speaks about the game,” he said.

And, if City’s current crop do lack the quality that last season’s Wolves side had, they could instead approach things the Millwall way…

Marshall added: “I think if you don’t have togetherness, then you might as well forget promotion. You need that because you take that onto the field. If your mate’s struggling you’ve got to pick him up and you’ve obviously got to help him out so having that togetherness is obviously a big factor in getting promoted.

“Obviously, speaking about the togetherness, that’s there [at Norwich], and obviously the quality’s there [so] it’s just taking it out onto the pitch and if we can and everything clicks then who knows?”

Promising signs – City’s new signing seems to have a pretty solid solution to the mystery of Championship promotion. But surely even the man himself would struggle to answer the next question: Where does Ben Marshall actually play?

Regrettably, we are no closer to getting an answer to this ultimate enigma. But Marshall did at least confirm he enjoys playing at right-back…

He said: “I’ve played a full season for Blackburn at right-back and I feel comfortable there and I feel like I can be effective so if that’s where I play then I’m more than happy.

“I feel comfortable playing wherever the manager puts me, apart from in goal obviously! I enjoy it at right-back, I feel like I see a lot of the pitch and can be effective from there. I can get up the field and obviously put some crosses in and hopefully get a few assists.”

One man who would have certainly benefitted from a Ben Marshall in-swinger is former City captain Grant Holt, who was also present at Carrow Road to celebrate the club’s new partnership with local brewer Woodforde’s.

Despite his absence among Norwich’s current squad, the former Canary is confident new frontmen Jordan Rhodes and Teemu Pukki can finally fill the Holt-shaped hole that still remains at City.

He said: “You know what you get with Jordan, he scores goals. You give him the opportunities, you put them in the box, he scores them. And that’s not all he does. I think he gets pigeon-holed, but he does a lot of work that you don’t see.

“Pukki’s different – he’ll back in, he’ll be strong, he’s deceptive – you put things in the box for him and he’ll certainly get on the end of it.

“It’s just about getting the best out of the two of them and that’s what they [Norwich] didn’t do last year – when we got in good areas, we didn’t really work it quick enough. I think when you look at pre-season, you’ve done that. So that can only be a good thing for the club.”

Goals aren’t the most important thing though, as Holt explained: “I think if they [Norwich] win games it doesn’t matter whether it’s 1-0, 2-0 or 2-1. No-one really cares as long as you win games. I’ve seen the best games in the world played here [Carrow Road] and we’ve been beaten, so you’ve just got to win games. As long as you’re winning, people will come.”

If City can win enough games this season, they certainly will – come rain or shine.