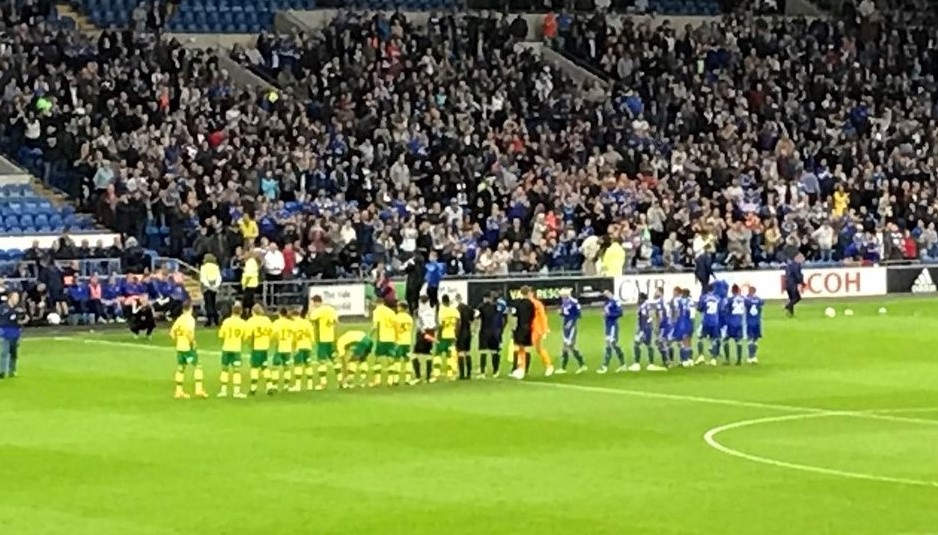 Well, that was a surprise!

An epic trip to South Wales to face Premier League opponents was, on the face of it, the last thing anyone needed after Saturday’s brutal defeat at the hand of Bielsa’s Leeds but yet again football did its thing and threw up the unexpected.

As it transpired, Daniel Farke and Neil Warnock took similar approaches to this Carabao Cup tie and made ten and nine changes respectively from their weekend starting XIs, so on that score the playing field was even.

It also transpired that, on the night, City’s XI was a better, more cohesive unit than their Cardiff counterparts. And however you try and spin it, an away win at a Premier League club – even one managed by Colin – is one to be lauded.

Warnock sides play a certain way: back to front in usually a single ‘pass’, physical and confrontational, numbers looking for second balls in and around the box, and they battle. I mean *really* battle.

So, before you can even think about getting the ball down to pass it there is a physical confrontation to be encountered; one that if you can’t win you have to at least match. That the Canaries emerged with a 3-1 win pretty much tells the story.

Quite how much City’s win has steadied a ship that was listing quite badly is a moot point given the wholesale changes, but what it has done is afford the coach some viable alternatives to the group that was so horribly outplayed at the weekend.

After the first round win over Stevenage, we bemoaned how so few had taken the chance to put forward to Farke their case for a first XI start but this time around there were several who did so in an emphatic way.

Dennis Sbreny clearly took the headlines with a brace and that he should now be considered as a viable alternative to Jordan Rhodes is a credit both to him and the work done with him by Team Farke over the close season.

The rough edges may not have disappeared completely but here is a young man who has rediscovered his knack in front of goal – the one that brought him to City’s attention in the first place. Last night’s performance plus a couple of tidy cameos already this season suggest that the pace and physicality of English football is now something he can handle.

Ben Godfrey is another who grasped the nettle and who must now be very close to earning himself a Championship start. Clearly, Farke has decided that, despite him impressing last season at Shrewsbury in a defensive midfield role, his role at City is as a centre-back, which has naturally limited his opportunities.

Through to the next round??Too Happy for my young bro @maxaarons2 on his first professional goal ? ❤️ pic.twitter.com/Umme7bltC7

But it’s a defence that leaks goals. Neither Grant Hanley of Timm Klose have hit great heights this season, so both will be aware that they have a fit, hungry and ready Godfrey snapping at their heels. Plus, I do wonder if his comfort on the ball would add an extra dimension given how many touches our centre backs have on the ball in the current set-up.

If that ball could be shifted a little quicker and with less hesitation, in the way Godfrey is capable, maybe then everything would happen a little quicker. Just a thought.

But, either way, he did his claims little harm last night.

And it’s a lengthy list of new possibilities. Add to it Felix Passlack, Max Aarons, Todd Cantwell and, of course, Emi Buendia whose performances all shouted “pick me” to Team Farke; the latter with his flicks and tricks looking like he can offer us that bit of ‘maverick’ that has been so evidently absent since the departures of Messrs Maddison and Hoolihan.

So, while in the greater scheme of things, all last night did was offer a few days respite from the negativity around City’s Championship start, it also offered some food for thought for Daniel Farke.

And, even more importantly, it gave those few hundred heroes who made the trip to Cardiff something to cheers about.

Folks, I salute you.