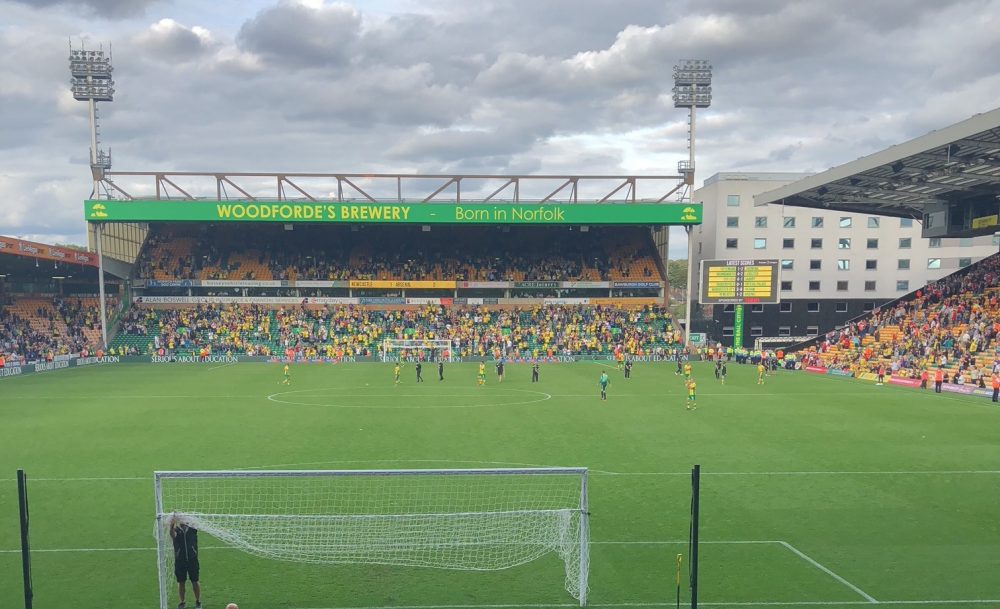 Wow! Who saw that coming?

Even MFW’s Mr Positive, Stewart Lewis, felt unable to predict a City win – instead going for a 1-1 – but should still be awarded a bonus point for being the only one in our prediction league to not foresee a Boro win (apart from Siri, who went 4-3 City).

But there it was, a performance that finally struck that right balance between grit and composure, and which saw City deservedly run out winners against a team who began the day in second, who were bursting full of confidence and who hadn’t conceded a goal since opening day.

Yet, at 2:55 it looked for all the world a mismatch. Not only did the announcing of Boro’s team throw up a heady mix of Championship quality matched with the odd international and Premier League veteran; they were also bloody huge. I mean massive.

If it was a boxing match, the two opponents wouldn’t have been allowed even near the same ring. Think Sly Stallone as Rocky gazing upwards at Apollo Creed before the opening bell. That.

Except on this occasion, as well as bobbing and weaving to avoid the barrage of lumbering right hooks and calling for “Adriannn”, Sly got the jab going, even danced a bit, and when the opportunity arrived, landed the killer blow.

Okay, so a pretty $hit analogy but, hopefully, you get the gist. They were enormous. We weren’t. But thankfully this is football and not rugby (or boxing).

A team-sheet that didn’t include the names Ben Godfrey, Tom Trybull and Jordan Rhodes was, I understand, met with some social media derision – no surprise there – but they were big calls that on this occasion Daniel Farke got right.

If anyone had taken a second to stop and think rather than tweet, there was at least a logic to the inclusion of Christoph Zimmermann and Marco Stiepermann. Both are big in stature and on a day when the bombardment was going to be largely from set pieces and mainly aerial, the extra inches of Zimmo were always going to be invaluable.

Ditto the height and bulk of Stiepermann compared to the slighter figure of Trybull, plus the fact that by opting for the extra mobility of an in-form Teemu Pukki up top, the former’s natural tendency to get in advanced areas offered support closer to our flying Finn.  It also enabled Mo Leitner to slot in alongside Alex Tettey again as ‘quarterback’.

And it worked. It absolutely worked. Maybe along the way, some lessons have been learned.

For me, in my own little bubble as always, I likened the challenge to that posed here at the back end of last season by Warnock’s Cardiff. We got beat up that afternoon and lost 2-0. Hence why I was so fearful pre-match yesterday.

I also got the heebie-jeebies midway through the first half, when an intense spell of City pressure produced next to nothing to bother Darren Randolph and brought back shades of that good 20 minutes against Leeds and that excellent opening half-an-hour against West Brom.

But I needn’t have stressed. Yesterday was different. For the first time this season – arguably for the first time in Farke’s tenure – it was a performance that spanned the full 96 and proved that if (still a big if) this squad can find a way to sustain the intensity and not concede daft goals it does have enough in its locker to be competitive in this league.

There were, naturally, lots of good performances yesterday – a rare one in fact where there was barely a weak link – but for us to be better these have to become the norm. Mo Leitner, who after some deserved brickbats of late was sublime yesterday, needs to produce this level so regularly we come to expect it.

Stiepermann – another to have by far his best game in a yellow shirt – needs to defy those who saw yesterday as just a one-off afternoon where everything just happened to click for him. Again, displays like that need to be seen by us as unremarkable – just the norm.

We’re not blessed with a squad so accomplished it can win games by cruising or at a canter. They need to be on it, and on it from start to finish – in fact, the system demands it. Others can soak up pressure, keep their shape and hit opponents on the counter-attack, but Farke wants us to dominate possession and be the ones always asking the questions.

Yesterday they asked the questions and found the answer.

Both full-backs were very good, even if Jamal Lewis did find himself a tad exposed early on, and to think that this was only Max Aaron’s second Championship start is unbelievable. In the same way Jamal took his chance and looked as if he’d already played 100 games, Max is now doing precisely the same, with his knack of joining in in the final third the key element in Pukki’s winner.

Long may it continue, and with one massive hat-tip to the Academy.

Zimmermann and Timm Klose collectively did a fine job to quell the expected threat of Assombalonga and also deal with the aerial threat from set pieces and Ryan Shotton’s Exocet long throws; Klose’s Lazarus moment proving 1) that miracles do happen and 2) it was destined to be our day.

The midfield too functioned just as Team Farke had dreamt it on Friday night, with Alex Tettey back at his obdurate and energetic best and Mo pullings the strings NFL-style as we know he can. An interesting stat that emerged on Twitter last night (via @NCFCnumbers) was that Leitner completed 27 more passes (94) than Middlesbrough’s three starting centre midfielders (Besic, Clayton, Howson). Enough said.

In the wide areas, Emi Buendia and Onel Hernandez were creative and energetic and tricky – all of the things you want from your wide men – with the little Argentinian intelligently drifting infield to get on the ball when the opportunity presented itself. Neither shied away either from the physical battle and both played their part in a successful, collective high press that regularly had Pulis’ giants floundering.

And then there was Marco. Good ol’ Marco.

I’ve rarely seen him play in midfield – which was the position we were told was his best when he arrived – but yesterday he ticked most of the attacking midfielder boxes while providing a physical presence that more than played its part in City at the very least matching Boro in the battle of muscle. He may not become a regular starter but he proved yesterday that Farke’s continued faith in him is indeed justified.

Pukki did, of course, what Pukki does. He scored a goal. He hadn’t had a great afternoon – he suffered from the same level of isolation that has befallen Jordan Rhodes of late – but he ran the channels, he closed down and when his chance arrived he took it. Who gives a stuff if it took a deflection. He earned it.

And it would be remiss not to close without a mention for one whose City career has, to put it mildly, got off to an ordinary start. But yesterday was the Tim Krul of 2014 who came off the bench in the 120th minute to help his country win a World Cup penalty shoot. The Tim Krul who was adored at St James’ Park. The one who was rated as one of the best.

His two crucial saves were pivotal to the win, but so too the air of calmness, the handling and the collecting of crosses at vital moments. And so too the professionalism to help wind the clock down in those nerve-jangling final minutes and how he engaged and orchestrated the River End when noise and fervour were needed.

Hopefully he, along with the others who enjoyed their best afternoon at the club, will use this as a springboard to push on.

Yet, let’s not too carried away. It was a good win but it was still only a win. Still only worth three points and we’re still comfortably in the bottom half of the table. Two away games in the space of six days now await – Reading and QPR – and now’s the time to prove that we can churn out these good performances against all types of opponent on a consistent basis.

It’s also a chance for Farke to show us that he’s now getting used to picking the right horses for the right courses.