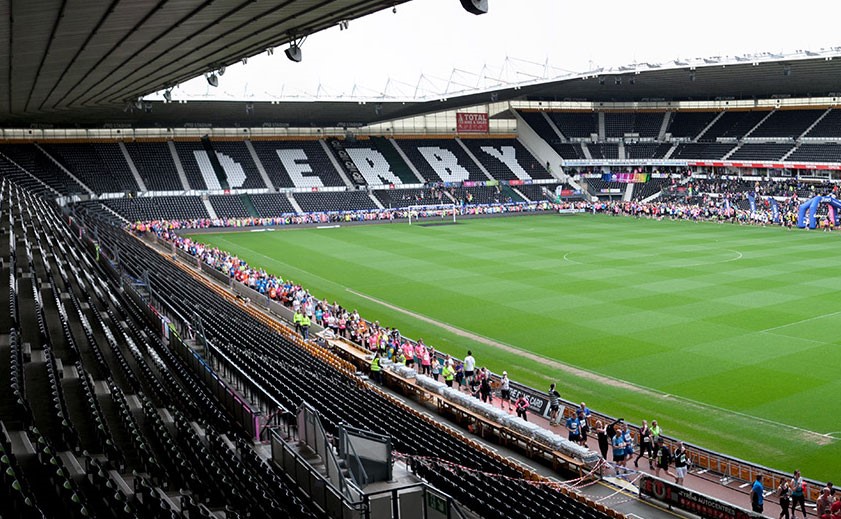 Ahead of tonight’s game against you know who’s Derby County, our Jack chatted with Chris Smith from the Ramspace fansite…

Thanks for chatting to me Chris. Let’s get the obvious question out the way, shall we? How do you think Frank Lampard has settled into his first managerial role? As a thanks for answering this one, I won’t refer to you as ‘Frank Lampard’s Derby County’ once… I promise.

Chris: Results have obviously been mixed but the general consensus is overwhelmingly positive. We have nine new players, a new coaching team and a return to passing football, so things will inevitably take time to properly take shape. However, the football is light years ahead of anything we saw under Gary Rowett. Frank has also really leveraged his status in the game to bring us some tremendous players such as Mason Mount, Harry Wilson and Fikayo Tomori. Winning away at Man United obviously helps but so far, so good.

Do you feel this season could be different to previous years or is it following a worryingly similar pattern already, by which I mean in and around the playoffs throughout?

It’s too early to say but it does at last feel like we are building something good. There seems to be no outstanding team this year, so let’s see where we are in January and see if we can for once have a decent January window as opposed to the catastrophic ones we’ve had for the last few years. Fulham showed what a difference this can make if you get it right.

Do you think you could stomach another playoff campaign this year or is it top two or bust?

I think I can stomach the playoffs. Anything can happen and I would fancy this Derby side in a cup-tie situation. What I couldn’t stomach again is the infamous Derby February collapse. We’ve been in great shape going into the new year in each of the last four years and simply fell off a cliff. That’s a much slower and painful death than any playoff defeat, I can assure you.

I think Norwich fans would take your February collapse over our annual October one but I do sympathise.  Changing the subject, what do Derby fans now think of Bradley Johnson? You’ve had him for almost as long as we did now but he doesn’t seem to have quite hit the same heights as he did here! And did you see enough of Cameron Jerome to form a firm impression too?

Overall, I would say Johnson has done okay but no more than that. We paid massively over the odds for him based on his stellar season for you guys, but he’s certainly not the only player we did that with and certainly not the worst – big up Nick Blackman. I think he’s a decent Championship player but no more than that and his transfer fee has done him no favours. Ironically, he’s actually currently playing some of his best football for Derby under Lampard and it will be interesting to see how the club views his contract renewal at the end of the season.

Jerome had a strange time at Derby. Brought in as a plan B, Sam Winnall’s injury and Nugent’s loss of form made him an immediate Plan A, right in the middle of the team’s infamous new year collapse. The fans didn’t warm to him at all and he became a poster boy for Rowett’s $hit-housing, anti-football tactics. Then from nowhere, he started scoring and almost single-handedly dragged us into the playoffs (including one glorious performance against Cardiff, scoring twice in a 3-1 mid-week win), even scoring the winner in the home leg against Fulham. He was never going to fit into this style of play and everyone wished him well when he left for Turkey.

As did most Norwich fans I think, especially when he turned down Them Lot down the road first. What have you made of Norwich this season? Are we genuine promotion rivals or not?

Again, its early days but the advantage you guys have at the moment is that you have no expectation and are off the radar. I haven’t seen a lot of your games but the results suggest a much tighter defence and you also seem to have found a goalscorer. If those things continue then there is no reason why Norwich can’t compete again,

Bearing that in mind, what would be a good result for you on tonight? And what do you think the score will be?

I haven’t seen enough of Norwich to know how you will set up. However, Derby have generally done well against teams who try and play against us and generally struggled when people park the bus, get physical or both (see defeats to Millwall, Rotherham and Bolton). We certainly have lots of attacking talent and flair, so an early goal for us or any attempt to play us at football will probably end up in a big Derby win.

However, if Norwich have done their homework, can keep focused and take their chances when they arrive then you guys can definitely get something. I’m looking forward to it, it should be a great game. I’m going 3-1 Derby.

One final question, which has nothing to do with the game but I’m curious (and you’ve already touched on it). Are you surprised by Gary Rowett’s start at Stoke or not? I am, but I know he’s always had very mixed reviews from fans wherever he’s gone!

Rowett talks a good game but his football is awful and absolutely designed for an underdog team. I said on our podcast preseason, I wasn’t sure how he would adapt his style of fundamentally not wanting the ball, to a team who are expected to win every week. The short answer is not very well! Nobody likes being dumped, but I am sure you can imagine how Derby fans view getting £2 million for him and then landing Frank Lampard!! As an aside, I predict either later this season or at some point next season, he will end up at Ipswich. Match made in heaven there for sure.

What a wonderful way to close the interview. Thanks for talking Chris!

Penney predicts: A tough one to call. Bradders has already issued his war-cry but I reckon we can spike his guns. I’m going for a 1-1 draw.

Andy assumes: Logic says we have to lose sooner or later. However, based on an illogical hatred of media darling Fat Frank, I’m going for a 1-0 Norwich win. Screw you Chunky.

Gaz (G) guesses: To even consider City winning six games on the bounce is preposterous, so I’m not going there, but it’d be doing them a disservice to predict a defeat. So, I have no choice – a 1-1 draw it is.

Cookie concludes: With two sides that like to dominate possession, I can see this one being a cagey affair with few chances. 0-0 draw

Stew suspects: Derby will be determined to get back on track, but we’re not ready to lose. A 1-1 draw for me.

Siri says: ‘Shout out to everyone who asks ‘what’s the opposite of in’. Derby 2, Norwich 0

Join the ‘fun’ by adding your predictions in the comments below.