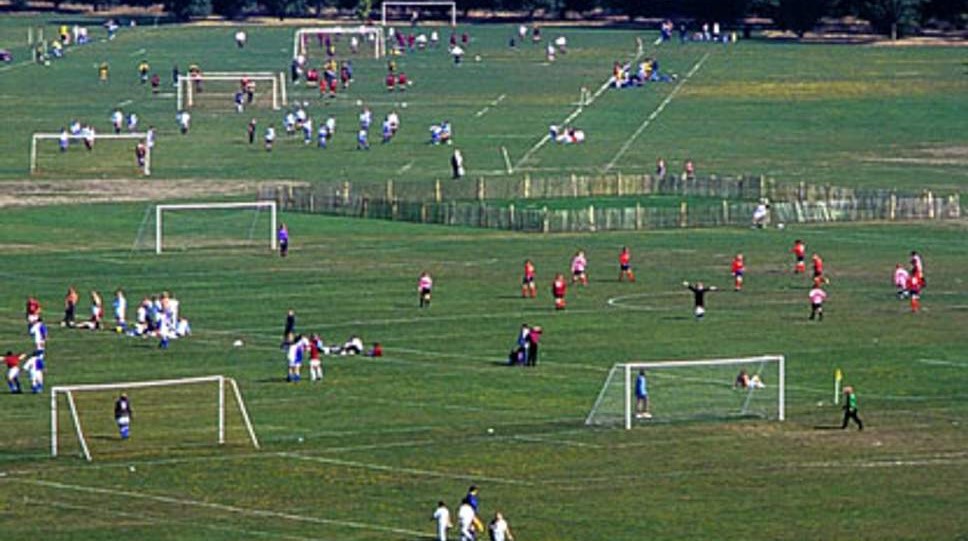 I thought I’d reminisce a little bit during the international break. If anybody finds any of the following (all true, honest) tales offensive please sue MFW Editor Gary for damages rather than myself. I do a good impersonation of being skint so you wouldn’t get anything out of me in any case.

But don’t we all recall when we ourselves played? Sure we do.

One of my earliest memories was playing for Barley Lane junior school in Chadwell Heath when I was nine or maybe ten. School-supplied yellow and blue hoops plus white shorts and any old socks your parents would buy you. We had to take our dirty kit home for our mums to wash – a couple of my little mates’ parents didn’t own a washing machine so mum would bung theirs in with mine. It was 1966 after all.

Uncle Pete treated me to a pair of George Best autographed Stylo Matchmaker boots. The gimmick was side lacing. If an opponent stood on your foot it took about 10 years to get the boot back on!

I went on to play for Chigwell School and in my first year (I was 12) some of my team-mates still played in blue rugby-style tops with high collars and buttons. Dad bought me a couple of “modern” long-sleeved Chelsea tops (they were relatively inexpensive back in the day) and Mum stitched almost-matching material over the screen-printed Chelsea badge so at least I had the comfort of soft cotton: to play in-)

Later the school splashed out on “proper” shirts with a bishop’s mitre motif and the school motto on them. Buggered if I can remember the Latin but it translated to… If I cannot find a way I will make a way. Sound philosophy but not always possible to implement. Especially on the pitch.

My memories of the early 1970s are hazy but I will never forget sliding this guy out on a freezing January Saturday and we both went over the old lime-painted touchline. The back of my thigh and his forearm were both expelling claret-like there was no tomorrow. Straight to the Chigwell School sanitorium and game well and truly over for both of us.

As a local reference, we played Greshams twice a season – a long journey in a minibus driven by a grumpy sports master. Hi, Vic if you’re still with us!

We also played Forest, Brentwood, Bancroft, Alleyns, City of London and other minor public schools I cannot recall. As I was a scholarship kid the finer points of some of the pre and post-match etiquette between the schoolmasters went over my head but I can assure you football is a terrific common denominator whatever your background. As if you didn’t know.

I remember Hackney Marshes with no affection whatsoever. I broke both ankles there (not at the same time obviously), got completely skinned several times by a guy who played for Caribbean Cruisers who was quicker than Usain and I also got at least three ribs broken by a guy from Ilford Firemen.

The changing rooms were so overcrowded and filthy that me and my mate Chris turned up in the car in clean kit and drove home in the dirty version. Change? Shoes only – trainers for boots. It was an Austin Healey Sprite after all. Yes, the roof leaked.

I was involved with a club called Stag FC who were in the Harlow League – a very good standard, somewhat akin to the Anglian Combination. Ian Culverhouse played in the junior version of it, the Harlow Recreational League. Glenn Hoddle and his brothers Carl and Dave played in it too.

Although I played on rare occasions I wasn’t really good enough for Stag and was very much part of the squad rather than the team. As I was working two jobs at the time and playing for the Press Gang every Sunday afternoon on the Marshes that suited me just fine. For WWII aficionados, Stag played home fixtures at North Weald Airfield.

One Sunday dinner time at the Bald Faced Stag in Buckhurst Hill – after which the team was named – I was behind the bar and all of us being relatively childish 19-year-olds my mates Micky, Dave and Ada (all also unselected that day) decided they would have a three-cornered burping contest, even if only to annoy the diners queueing up in the adjacent sectioned-off bar for their carvery feast. I was the judge with a free pint to dispense to the “winner”.

Bobby the guv’nor knew our intentions but said he didn’t care what any of us did unless he got an actual, precise complaint from said feasters. He was one of the beer boys, not a true friend of the diners.

Well, Mick and Ada did their stuff. I could barely stop laughing and awaited Dave’s attempt. Then suddenly the Stag FC manager Johnny Cook (no relation to MFW’s Steve) burst in saying: “We lost. Lager shandy”. I pulled it up for him, he necked it in one, and let’s put it this way, Dave no longer had to take part in the disgustfest.

I think they heard Cooky’s belch in Colchester. Then he looked at us as if to wonder what was wrong. He had won our contest without even knowingly entering it. And got a free second pint courtesy of myself as the anointed judge. Happy, carefree days. And come on, we’ve all done stuff like that when we were kids. Haven’t we?

Then there was a strange match I played in at Lingwood. I started out in goal but my mate Wayne and I collided on the line, they scored as a result and Wayne took charge. He decided I had to go out on the pitch because I wasn’t up to the goalkeeper role. I dispute Wayne’s decision to this day but he was a better player than me so I rolled with it at the time.

Anyway, the Lingwood lot had an extremely gobby right-winger who kept up the “don’t follow me around” routine and tried the odd leg-scrape and shirt-tug. Nothing too serious, just bloody annoying. I kept my tracking up and he never got a constructive kick. It ended up 4-4. Our ref that day was one Paul Buck, who used to play the drums at Potters.

I was so knackered afterwards it was beyond belief. 75 minutes at left-back in your 40s – jeez.

I carried on to play many, many six-a-sides at the UEA and even at 60 I would still like to continue in some way if I possibly could. However, my back says no. All you younger readers, please keep playing. It really is a case of if you don’t use it you lose it.

Although I can still play tennis (albeit slightly carefully) and am half-decent at table tennis, which you can play at any age and isn’t as boring as you might imagine, football is the finest game in the world in terms of both playing and watching.

Finally, my greatest claim to infamy is that I’ve played on the plastic pitch at Kenilworth Road.

Please share your experiences folks – MFW would love to hear from you. Every one of your memories will be similar but different to my own and I’m sure we’d all be interested to share them.