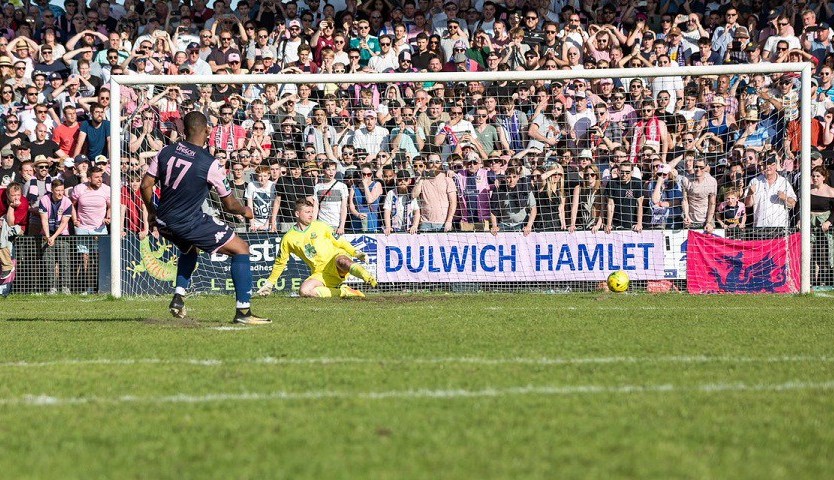 So, where were we? Oh yes, Norwich City’s season was spluttering to an end and Dulwich Hamlet were heading into the playoffs.

While you lot were looking for hard for any signs of progress in the apparently interminable ‘transition’, Dulwich were winning the playoff semi against Leiston, then the final against Hendon on penalties.

It was a boiling hot May bank holiday Monday, with over 3,500 people in South London hanging on in there through extra time, and finally going mental as Dipo Akinyemi tucked away the Hamlet’s final spot-kick (above). This was a ‘home’ tie at Tooting and Mitcham United’s rather splendid ground, where Dulwich have been playing since their evil landlords (a New York property developer called Meadow Residential) evicted them from Champion Hill, where they’d played for over a century.

The play-off final win got them promoted into the National League South, where it all starts to get a lot more serious. The first few games were a real struggle, narrow defeats against cannier or just plain better teams, but it all started to come together with an away draw at Chelmsford City.

Dulwich are now unbeaten in four, with three wins on the bounce, grinding out results and currently three points off the play-off positions. With the same kind of congestion as the Championship, that still leaves them in sixteenth place, but they’re nine points clear of the relegation places. For a first season at a much higher level that’s pretty good going.

The core of the team has been retained – again a real achievement at this level, where players move clubs at the drop of a brown envelope – with some shrewd additions bringing higher league experience or potential.

The real star is the manager Gavin Rose, who earns his living running an academy which regularly produces successful professionals (the latest are Ethan Pinnock at Barnsley and Erhun Oztumer at Bolton), and handles himself with more dignity and honesty than most of the closed shop of ‘real football men’ who flit around the Championship and the lower reaches of the Prem-thingy.

Rose has that great manager’s knack of coaching the very best out of limited players. I am amazed he’s not been lured away into league football.

The prospects on the stadium are not actually too gloomy either. The developer’s plans are slowly going through the planning process, and a combination of an assertive local council and (amazingly) sympathetic government officials and ministers should see the club back where it belongs in a season or two, with a new bigger stadium and sound finances.

The club still has to survive on much-reduced attendances and income in the meantime, but they’re doing all the right things, not least by winning more games than they lose.

I did my bit by renewing my season ticket (£64 with an over-60 concession) and chucking my spare change into the ’12th man’ bucket when I manage to get to games. This should be a lot easier in future because after thirty years in Norwich we are moving to a smaller house in lovely, leafy Honor Oak in South London, just a ten-minute bike ride away from Champion Hill.

The move was prompted by the realisation over the summer that our three adult kids are not coming back to Norwich. They’re all settled in homes, careers and relationships in Peckham and Camberwell, so if we want to see more of them (and our first grandchild) we have to go there.

We’ve had thirty great years in this fine city (my only regret spending too many of those years on the death star that is Norfolk Social Services), and I wouldn’t live anywhere else in England. But I have to say I fear for its future (and anywhere else outside the semi-independent city-state of London).

We are starting to see the things here that drove us out of London all those years ago: an explosion in the number of homeless people, who now (bless ’em) form a quite distinct and occasionally threatening ‘community’ in and around the place; shops and businesses and restaurants struggling and closing down; a general coarsening in the public atmosphere, which as a cyclist I see most clearly in what are now almost daily altercations with aggressive, angry drivers.

The prospects are not great, with deepening poverty and inequality, the sleepwalk into the catastrophe that is Brexit, the decline in local professional jobs, and a burgeoning drugs problem coming out on ‘county lines’.

I have promised myself a match at Carrow Road before we go, most likely my last one ever. I’ve had an odd relationship with Norwich City. For our first few years in the early nineties, I used to take my young son to four or five games a season (he still considers himself a Norwich fan).

As I’m sure you’re all aware, Norwich were pretty good at that point – Chris Sutton one of the best players I’ve ever seen – but after growing up in Leeds and following United long after I left in my late teens, I found the Carra atmosphere strangely muted. When I heard an old guy say, at the end of the most memorable game of the period (4-5 to Southampton), “Oh well, they need the points more than we do”, I was simply bewildered.

There was a kind of old-world gentility and sportsmanship among Norwich supporters that I now consider rather admirable.

Sooner that than the sullen grumbling or pop-eyed, red-faced fury of the later Chase era and the endless managerial merry-go-round of the 2000s. I used to try to guess the result from the faces coming up Carrow Hill past our house, then gave up when I realised they were always – win, draw or lose – glum.

It was only with the arrival of Paul Lambert that things got really interesting again. I was at the infamous Colchester game, which I honestly found hilarious. I can still see the ball bouncing over that Aussie goalie’s head, fat blokes chucking their season tickets around, and Lambert’s lot scoring apparently at will.

When Norwich poached him, I started going regularly. That League One season was great fun, real football played honestly and enthusiastically, typified by the ‘Buffalo with the feet of a Ballerina’ (to quote a Scandinavian TV commentator on the later 2-2 draw at Everton) Grant Holt. I bought a season ticket, and thoroughly enjoyed the ride through the Championship and into the Prem-thingy.

I still think the full story of the Lambert/Holt era remains to be written. The chairman’s description of “the most impatient man I’ve ever met” and Lambert’s subsequent managerial failures hint at a much juicier backstory than we’ve yet heard.

I don’t think Norwich (or Lambert) have ever really recovered from the break-up (remember the Villa fans joining in with “There’s only one Paul Lambert!”). There were some good times under Hughton, a perfectly competent manager if not a particularly good fit here, but the club gradually sank into the football (and finances) of fear that besets every small-town club after a year or two in the ‘promised land’. I gave up my season ticket next to the directors’ box and saved myself £815. The most recent games I saw (1-1 v Swansea, 0-0 v Burton) were two of the worst I’ve ever seen.

I do hope the Farkelife/Webberlution works out, not least because it represents about the only attempt at sustainable sport and business practice being made in the madhouse of the top two English leagues. If you must have an owner, rather than the democratic mass-membership model in countries with a much healthier professional football cultures like Spain and Germany, wouldn’t you rather have the Smith/Joneses than the crooks and swindlers whose sole interest in English football is the actual or potential TV revenues?

And the breakthrough this season of some serious young talent is what most football supporters want to see. I will continue to follow Norwich from afar; theirs will, as they say, be the first result I look for.

In the meantime, I’ll be a regular at Dulwich Hamlet. Come and join me if you’re ever down that way. It’s a lot of fun, affordable (a tenner a ticket, kids get in free) and the football is far better than you might imagine. But not so good that it becomes utterly predictable and boring like most of the Premier-thingy.

No presser today - obviously! So let's have a live Q&A instead.

This is a nice piece from @Gary_Gowers about the @NorwichTalk1902 YouTube channel created by @ben_ambrose23 and I.

Includes some background on *that* Webber interview. Worth checking out. Some lovely memories in there. #NCFC

Am I the only one regretting that there's no game tomorrow? #ncfc