Our Jack unintentionally gave me the collywobbles earlier in the week when he wrote an excellent piece comparing City’s fortunes in the Septembers and Octobers of recent years.

The gist was clear: City can do Septembers fine, they’re very good at Septembers in fact, but give them an October to tackle and the wheels have a nasty habit of departing the vehicle. The evidence was already there for 2018: two fine performances but just a solitary point to show for them.

So, forgive me if I was a little sceptical ahead of yesterday’s visit to the City Ground. It’s never an easy place to go and even though we snatched a 2-1 win there in September 2016, our record there isn’t great.

As is traditional, my dad and I had a Saturday morning chat about the what lies ahead for City and the notoriously unreliable Gowers think-tank could see little but gloom.

‘I can’t see us getting anything this afternoon, boy’.

As you can tell, it wasn’t an especially in-depth analysis 🙂 Just a collective feeling that a buoyant Forest may have just too much for a Pukki-less City.

Oh how gloriously wrong we were, even if after ten minutes it didn’t look or feel like it.

But there is something about this crop that we’re not used to. We’re used to brittleness and fragility. We’re used to seeing them wilt when the pressure gauge is turned up to an eleven.

Instead of that, we’re getting a team who struggled to get out of their own half for the first ten minutes, who struggled to cope with a side that was brimming full of confidence and were playing a scintillating brand of football, but who dug in, cleared their heads, and found a way.

That the winning margin could have been greater speaks volumes for how well adjusted and mentally tough this bunch are, and how Daniel Farke has found a formula that stays true to his footballing beliefs while still being robust enough to cope with all the vagaries of Championship football.

Notable too is how the teenagers in this side are integral to it and not there just to learn. They too are armed with the mental resilience needed to cope with arenas like a full City Ground and rather than require hand-holding, they play their full part in what has now become the epitome of a team effort.

The danger of having to rely on a moment of Maddison magic or a Murphy dropped shoulder for a goal was that if either had an off-day, then City found themselves scratching around for an alternative. And there weren’t too many.

No-one can afford to be without a brilliant player like James Maddison and to say we’re better off without him sounds ridiculous, but as a unit, as a team, everything we’re seeing now suggests that there’s now a better balance to this squad.

Where, 12 months ago, others would have turned to him for said moment of inspiration, now they are owning that responsibility themselves. And I’d argue that applies to both the middle and the attacking thirds of the pitch.

The improved balance to the squad, something that owes as much to the work of Stuart Webber as it does to Farke, is becoming increasingly evident with every injury and every substitution. The player incoming tends not to weaken things one iota but instead offers an alternative capable of changing things for the better.

And there’s a whole group of players there simply itching to be part of it and who, with every passing cameo, are strengthening their chances of getting a start; Mario Vrancic being the most obvious one.

Marco Stiepermann, for example, had an off day yesterday, which included a horrible miscue from six yards out in the first half, and will know, despite being simply brilliant over the last six or seven games, he can’t afford another. 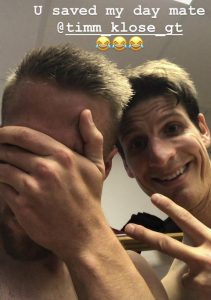 To be fair to Stiepermann, he knew all too well how costly his miss could have been but for dead-eyed Timm Klose and, in his own way, thanked his Swiss team-mate on Instagram last night (right). And right there, in a daft image and caption, are further traits that have helped propel this group to a level few of us predicted: honesty, camaraderie and likability.

Quite how far all of this can take us is very much an unknown right now – and while we’re all cock-a-hoop over yesterday’s win, the Championship is such that a blow to the gonads is only ever a game or two away – but this doesn’t feel like a bubble that’s about to burst.

The old adage about not getting too high over a win and not too low over a defeat is very easy to say but rather harder to put into practice – at least it is for us fans. Human nature tends to kick in. But Team Farke appear very good at getting that very message across to the players, all of which feeds into the point about mental resilience I made earlier.

So, one of the good days – a good day that has taken us into the playoff places – but let’s resist the party poppers and the bunting for the time being. Bolton are just five points behind us and are in 18th!

We just need to follow the current path, keep it humble, and see where it takes us.