Shortly before Christmas 2017 I wrote a piece reviewing City’s financial situation. Looking at past years accounts and predicting a less-than-rosy future. I recommend a re-read (along with the comments).

It’s been a particularly busy and complex period for Norwich. It covers sales dating back to Jonny Howson and Graham Dorrans, through to this summer’s deals for Josh Murphy and James Maddison. We saw the club bond inject £5 million into the accounts. Contracts have been renegotiated, while others were let go.

So, what are the results and how did my predictions fare?

Overall the sheer volume and value of players sold saved us last FY. What is surprising is that costs weren’t driven down as expected, or, in fact, at all.

What does the future hold?

Unfortunately, the books continue to paint a bleak picture. Being in debt at Christmas will increase the need to sell players, just as the team is coming together. Our owners are debt adverse and unwilling to invest, so I’d expect 2-3 good players to leave, just to keep us afloat until next summer.

Expenses must be driven down, so, unfortunately, players like Klose will be candidates. But savings must go beyond player wages and deeper into the club. As for what this means for the bond, I’m unsure.

What is clear is that that the funding hole left by the end of parachute payments remains.

I finished the last piece with these thoughts “we’re out of money and we’re out of time” and “Enjoy Maddison while you can.”

This time I’ll finish with this – We’re out of money and out of time, enjoy Klose and Lewis while you can.

For transparency, below are my original predictions (est.) vs. the actuals. It appears my pessimistic predictions for cost savings were, in fact, optimistic. 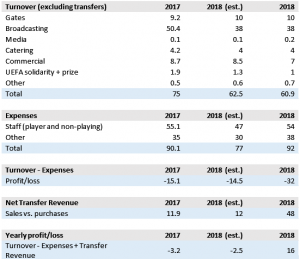 The original Costessey Yellows, the instigators of a life-long passion, friendships and bonds that go way beyond football. On the ball, city. 💛💚 #ncfc

Bloody hell, he was good. #NCFC