Ahead of a collision of Canaries and Bees, Matthew Howman has been chatting with talkSPORT presenter and Brentford fan extraordinaire, Natalie Sawyer…

Hi Natalie, I’ll start off by saying what a great job you’ve been doing on talkSPORT and it’s great to speak with you. How have you been enjoying the challenge so far?

Natalie: Hello, hello…and thank you very much. I’m really loving my new home at talkSPORT. It’s a new challenge and requires a lot more work than what I’ve been used to for a while. So I often find myself enjoying an afternoon nap as a result! Ha! But it’s great to be a part of the talkSPORT team and be involved with sport 24/7 – I’m loving heading out to games again as there’s nothing like being at ground to soak it all in when I’m hosting my regular Kick Off show (Tuesday – Thursday, 7-10pm)

Before we cover Norwich vs. Brentford, what has been your highlight of the season, so far?

Goodness, it might sound odd because we lost the game but the first 20 minutes or so of the second half of our League Cup match at Arsenal was a performance to cherish! First half it seemed we were overawed by the experience but after the half time break, we came out a different side and gave Arsenal a good game. It looked as though we’d rattled them especially when we scored. We showed them how well we can play with our expansive, attacking style and although we ended up losing, I was certainly proud of the performance.

Moving on to Brentford, what’s your history as a supporter, are you a season ticket holder/how long and what’s your favourite memory?

My love for Brentford began in the late 80s when my mum and dad took me and my brother to a game. We were sat in the Wendy House, now the away end at Griffin Park, and I remember loving the experience – To this day I can picture the haze of the floodlights. My dad wasn’t into football before then but seeing how much we enjoyed it he took us more and more and now we are Bees through and through and are season ticket holders. We’ve experienced plenty of highs and lows but the last five years or so have just been wonderful. From promotion from League One, to getting to the playoffs in our first season in the Championship and now playing some of the best football I’ve ever seen at Griffin Park. It’s a great ride that we are on right now!

Your thoughts on how Brentford’s season is panning out? The manager recently departed to join Aston Villa with the team on the edge of the playoffs – do you think Brentford can still challenge for the top six?

Every few years Brentford like to go through a turbulent period like we have done in the last few weeks with losing our boss, Dean Smith to Aston Villa. I can’t blame Smith for wanting the move to Villa. He’s a boyhood fan of the club, comes from the area and it’s a step up from Brentford. But, the last time we lost our manager in similar circumstances (Uwe Rosler to Wigan), we promoted from within (Mark Warburton) and we went up to the Championship, so I’m hoping history might repeat itself with Thomas Frank taking over having been at the club for two years already! We are playing some really good football and I’m keeping my fingers crossed that we can put in the performances to see us up there in the all-important top six places once again at the end of the season.

Looking back on the games I’ve seen so far, Middlesbrough have looked the most resolute side, but Leeds have played by far the better football. Who’s your pick for the title?

Middlesbrough are playing the way you’d expect a Tony Pulis side to be. Hard and, as you say, resolute. They might not be the prettiest to watch but they will do a job, so I’d expect them up there. I have a feeling that West Brom might be the side to look out for. Darren Moore is doing a great job there and they have a very good squad who you imagine can deal with the rigours of the Championship. (Except when they play Derby – Ed ? ).

It’s also sometimes difficult to see the negatives in your own side, or hard to see the positive’s depending on your mindset! What’s your take on Norwich this season?

One defeat from your last nine is a pretty good return right now. The Championship is so tight that one win can catapult you to the top and a defeat can see you plummet, so it’s always hard to interpret a season at this stage but it does all look good with the way things are going for Norwich right now

The area that’s pleased me most with Daniel Farke is how he’s brought in, and kept faith with, the youth players with Jamal Lewis, Max Aarons and Todd Cantwell all holding regular places in the first team. Do you think he’s doing a good job at Norwich?

The fact that Daniel Farke is promoting and using youth players can only be a good thing for Norwich. Unearthing local talent is so rewarding and it’s great to hear that youngsters are being given a chance. I believe Farke is doing a good job. Last season was quite indifferent for Norwich, finishing 14thand for some owners they’d have been unhappy with that, especially as it wasn’t that long ago that Norwich were in the Premier League and so an early return would have been high on the agenda. But, I’m pleased the board stuck by Farke because right now it’s paying dividends and there’s no reason why Norwich can’t be up there come the end of the season.

If you could cherry pick a Norwich player in January to take to Brentford who would it be and why?

What does every team need – goalscorers! We are lucky at the moment to have Neal Maupay, who’s really taken to the Championship since his move from France. He’s into double figures already so I’m not disappointed in him in any way but it’s always nice to have another in-form striker – so for me I’d go for Teemu Pukki.

What’s your prediction for the game? Are you confident Brentford can go to Carrow Road and pick up a point, or three?

Finally, before you go, Norwich seem to fall by the wayside on talkSPORT quite often – is there anyone at the studios who can sing our praises? If not, that could feed a topic for your next show… ?

First of all, I do apologise if you feel as though Norwich aren’t getting the recognition they deserve. I’ll endeavour to change that. But, all I’ll say is sometimes it’s better to go under the radar than be a Leeds or a Villa who have endured some tough times in the limelight!

Thank you so much for your time, enjoy the game and we look forward to hearing your next show on the radio!

We labelled this week as the clearest indication yet of where the season is heading, with two home games against strongly fancied opponents, and part one was negotiated with some aplomb! Can we achieve something un-Norwich like and nail part two? Surely not…

Andy assumes: Brentford are flailing in the wake of Smith’s departure, Norwich are flying, only one winner: 2-0 Norwich.

Gaz guesses: We’re not used to runs like these – I keep waiting for the whack to the cojones. But, assuming complacency doesn’t set in, I can see us edging another. 2-1 City.

Cookie concludes: The smart money would be on a tight encounter with a goal either way to settle it. It’s what we do. But I’ve never been smart – City to win 2-0

Stew suspects: The biggest danger this time may be complacency. But Farke is keeping their feet on the ground, and Rhodes is starting to do his stuff. 3-1 to City

The oppo’s opinion: I have to be confident. So I’m going for a 2-1 win…for the Bees of course!!

Siri says: What would I know? City 3 – Brentford 1 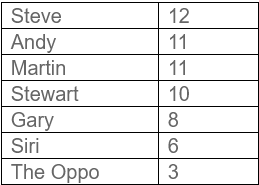 @Hodgeythehack You & I are very fortunate that we belong to the #NCFC community but also the #NBAintheUK community as well. Keep doing your thing brudda 💛

The #NCFC fan community is cracking. Very grateful for how many people I’ve met due to it #OTBC 💛💚

I thought my video got bagged but it’s back 😍😍 #ncfc