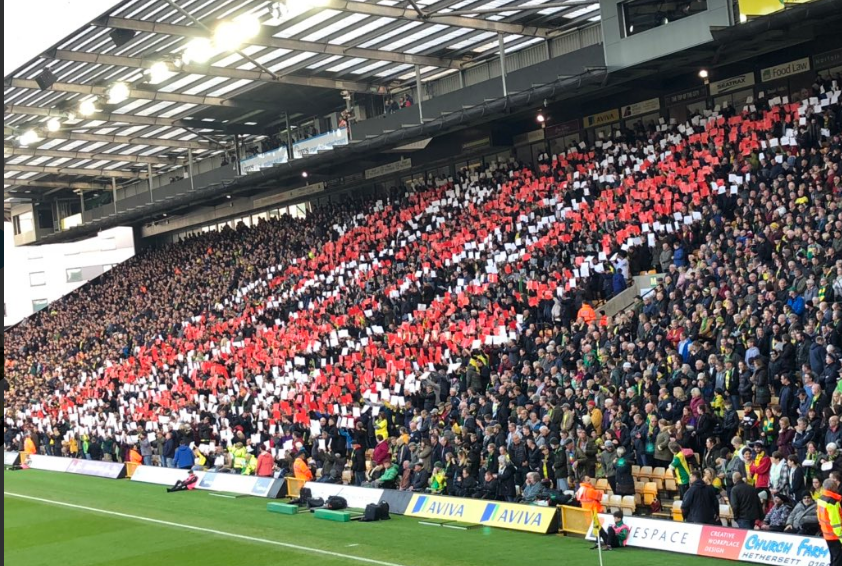 Every so often one comes along that defies description.

That City somehow won the game with two goals in injury time made it a unforgettable in its own right, but there felt something special in the air from the moment the day’s community heroes were introduced to the crowd.

Pip and Alan Harrison are brothers, war veterans and have a combined age of 200 – who better to bring out the match ball – and the ovation afforded to them by City and Millwall fans alike was spine tingling.

So too the two-minute silence that was beautifully observed and broken only by the most perfect but haunting rendition of the Last Post by a lone bugler.

And that was all before a ball had been even kicked.

The Millwall fans undoubtedly added to the occasion and were as raucous and brutal as ever, but I hate to break it to them… they’re not as loathed and hated as they like to believe. In fact, aside from the few idiots that most clubs have in their ranks, they’re quite likeable. Proper football fans who, for the most part, we respect.

And all talk of their team coming to park the bus was quickly dispelled early on with a fairly enterprising first-half performance, with – despite Tom Elliot’s aerial threat being the main focal point – the ball being worked through the thirds for spells.

It was tough going for City and took the Millwall goal – one that wasn’t defended especially brilliantly – to fire them into life. As ever, it was getting Mo Leitner on the ball with time and space that was the key and as his influence grew, so too did the Canaries’ grip on the game.

Neil Harris’ homework paid off though to a degree and one thing absent from City’s attacking forays in the first half was getting the overload down the left side with Jamal Lewis going outside Onel Hernandez. It simply didn’t happen, although Max Aarons – possibly as a result – was the out ball and saw loads of it, without being able to find a clinical final ball.

But minutes 1 to 45, as we know, are just about biding our time and moving our opponents about the pitch. The goals can wait. At home, the River End will just have to take it on the chin.

And sure enough, just four minutes after the break the goal came. Marco Stiepermann was released in the inside left channel and found the perfect ball to pick out Teemu Pukki’s clever movement across the defender at the front post. The finish was unerring and of a player who is in a rich vein of form.

The penalty miss was gut-wrenching at the time but is what it is. It’s becoming a problem albeit one that for now is not costing us.

Yet, when Mo’s wonderfully clean, swerving strike made it 2-1, for all the world it looked as if the breakthrough would be decisive. For two whole minutes, the Barclay sang of being “top of the league” – one that *nearly* came back to bite them on the bum.

But all it actually did was trigger 16 minutes of mayhem. The type of drama Hollywood producers would scoff at for being too far-fetched.

Lewis, having had a relatively muted first-half, was unfortunately complicit in the Millwall equaliser when his inadvertent header found Timm Klose and Christoph Zimmermann for once too far apart. Ryan Leonard pounced. Tim Krul growled. Lewis’ ears were ringing.

But the shoe (or boot) was on the other foot just two minutes later when Krul’s unusually hurried throw – a case of being “greedy” according to Daniel Farke – got nowhere near its intended target. We know the rest – and for almost the first time since that shot against West Brom squirmed through his hands, the fragile side of the Dutch international revealed itself.

As the clocked ticked past 90:00 it was the Millwall fans making the noise – mocking the Barclay for assuming we were “top of the league” – but the resolve in this group is unwavering, the belief absolute, and Farke’s move to 3-5-2, with Jordan Rhodes joining Pukki up top, was about to pay dividends.

Emi Buendia, all South American flair blended with fire and brimstone, used his slide rule to pick out Rhodes, who must’ve been teetering on the brink of offside, and while others tense up in front of goal, the chap who is now one of us relaxes. The finish was clinical.

That there were five full minutes between Rhodes’ equaliser and Pukki’s winner seems ridiculous looking back – but there were.

At the time it was a moment a pure ecstasy… pure undiluted elation … but when the dust settles it will be a moment that’s talked about alongside Adam Drury’s equaliser against Boro and Simeon Jackson’s “chance” winner against Derby – the actual finish bearing more than a passing resemblance to Jacko’s scruffy finish.

But if the finish was fortuitous, the move was exquisite. All starting from a threatening Millwall corner.

I’m sure Ewan Wilson won’t mind me sharing this…

The patience shown by the players and their total belief in the system – as highlighted by Mo Leitner is his post-match interview – is total and not one player was tempted to ‘send it’ or ‘stick it in the mixer’. Instead, it was worked through the thirds until Mario Vrancic saw the slightest of gaps in behind the last Millwall defender.

The weight of the pass was perfect, Pukki needed some contact, any contact, and a bit of luck. He got both and it will go down in the annals of Canary history – regardless of what happens over the next six months.

The ol’ girl reverberated. Sir Geoffrey was smiling. And the scenes were of the never to be forgotten variety. Now we know how it felt at St James’ Park when Alex Neil’s City suffered the same fate.

So, wow, we head into the international break, and to Florida, top of the pile, and there is nothing Frank Lampard’s Derby, John Terry’s Villa or Marcelo Bielsa’s bloody Leeds can do about it.

Enjoy it people. The age of Farkeball is upon us.