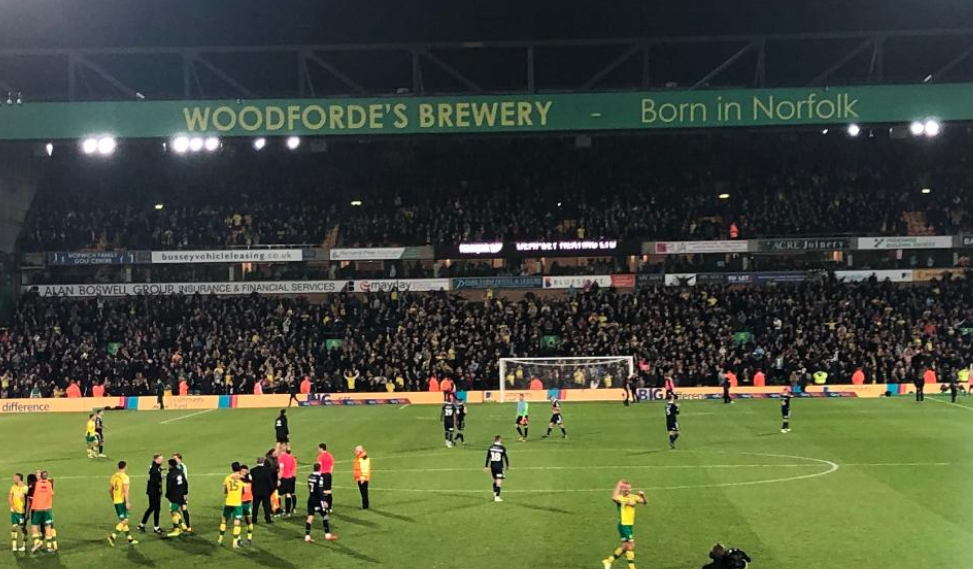 Over the past few weeks, much has been written on these pages of City’s remarkable rise to the summit of the Championship and the advent of the now-pervasively referred to ‘Farkeball’.

Eloquent articles from multiple MFW heavyweights have sought to diagnose the reasons for our magnificent form, delving into the inner intricacies of City’s passing game and our newfound sense of defensive solidity.

And, all of the content has been firmly agreeable. To corroborate the cogent views of Gary, Martin, Stewart, Connor and co, the reasons behind this run have laid in City’s unerring ability to shift the ball quickly and manipulate their opponents around the pitch. At the back, Timm Klose, Christoph Zimmerman and Tim Krul – Milwall’s third goal on Saturday aside – have blossomed into a largely reliable trio.

While it has been City’s away form that has functioned as the most striking characteristic of our surge to the top of the second tier, Carrow Road is slowing emerging as a venue opposing teams are visiting with a sense of dread comparable to that with which Theresa May is approaching Brussels with at the moment.

I wasn’t at that memorable Milwall game at the weekend – I treated myself to the wonders of Rochdale vs Gateshead in the first round of the FA Cup instead – but by all accounts, it sounded like the place we all cherish was absolutely rocking.

Which conjured up an interesting question. Yes, the principal reasons behind this team’s success may lay in the nature of the football we’re playing and the visible unity among the camp, but is there a more nuanced, intangible explanation for all of these wins we’re seeing at home?

This season has witnessed a shift from City shooting towards the River End in the second half to attacking the Barclay instead. In simple terms, Farke’s men now attack the more raucous end of the ground during the most pivotal period of the game, rather than the more subdued and less partisan Regency Security Stand.

Although such an observation may represent a mere instance of confusing cause and correlation, it is interesting to consider how far this has made a difference to City’s fortunes. Last season, we struggled so chronically to convert draws into wins at Carrow Road, being held at home by the likes of Burton, Bristol City, Barnsley, Preston and Nottingham Forest throughout a largely forgettable campaign.

This season, however, and City are demonstrating a newfound sense of second-half ruthlessness, underpinned by a fervent collective spirit and an inability to ever give up. No games better delineated this than the televised match against Aston Villa and Saturday’s seven-goal thriller. Attacking the end of the ground that provides the most audible level of support, City are capable of turning games around.

Again, my thought process here may be flawed. But late winners and equalisers at the Barclay End is not a new trend that has just emerged in 2018. Although a somewhat taboo topic given recent events, cast your eye back to that magical promotion season under you know who, when City scored last-gasp, game-changing goals against no fewer than five teams in front of the Barclay. Burnley, Bristol City, Reading, Millwall and – most memorably – Derby were the victims that season, sides that succumbed to a crescendo of Carrow Road volume facilitated by the Barclay and Snake Pit.

Think Timm Klose against Ipswich last season. Think Ryan Bennett against Hull in 2013/14. Of course, I’m not suggesting that City only score late goals when shooting towards that end of the ground, but it’s difficult to argue against the notion that the vast majority of late drama Carrow Road has played host to over the past few seasons has taken place with this being the case.

Because atmosphere matters. While it may be impossible to distinguish whether or not it is good football that breeds better atmosphere or enhanced atmosphere that brings better results on the pitch – it’s almost certainly a combination of the two – the role of the crowd is nevertheless fundamental. These players are human. Inevitably, they are influenced by their surroundings and the mood of the crowd they are being paid to entertain.

This article is also not in any way a criticism of the River End. The Barclay has, and probably always will be, the area of Carrow Road that generates the most noise, largely owing to the many generations of fans who come to football to sing along and vocally get behind their team.

I really do believe that it is no coincidence that City’s late turnarounds, more often than not, take place in front of those supporters, such is the extent to which this audible support influences both City players as well as the opposition.

Considerable credit must go to AlongComeNorwich and Barclay End Norwich, both of whom have been instrumental in bringing additional colour, vibrancy and noise to the ground. The scenes at the end on Saturday verged on the tear-jerking even from 250 miles away, such were the decibel levels inside the ground after that late, late Teemu Pukki winner.

The argument proposed here is not to detract from the stunning City performances we have witnessed of late. Of course, our form away from Carrow Road has been equally, if not more, impressive, the principal reason being Farke’s ability to instill his players with his fast, tempo-based possession philosophy and drill his ever-dependable defence. Instead, this is merely a point that I think warrants raising in light of our recent success at home, following the club’s decision to switch the default end we shoot towards during the second-half.

Regardless, what we are witnessing this season does seem to have a special air about it. Norwich City are quite simply a joy to support at the moment, and it remains difficult to recall a period during the last decade when the club has been as united in such a sense of collective positivity. Whatever the ingredients behind this success, one thing is for certain: just keep shooting towards the Barclay in the second-half, City.