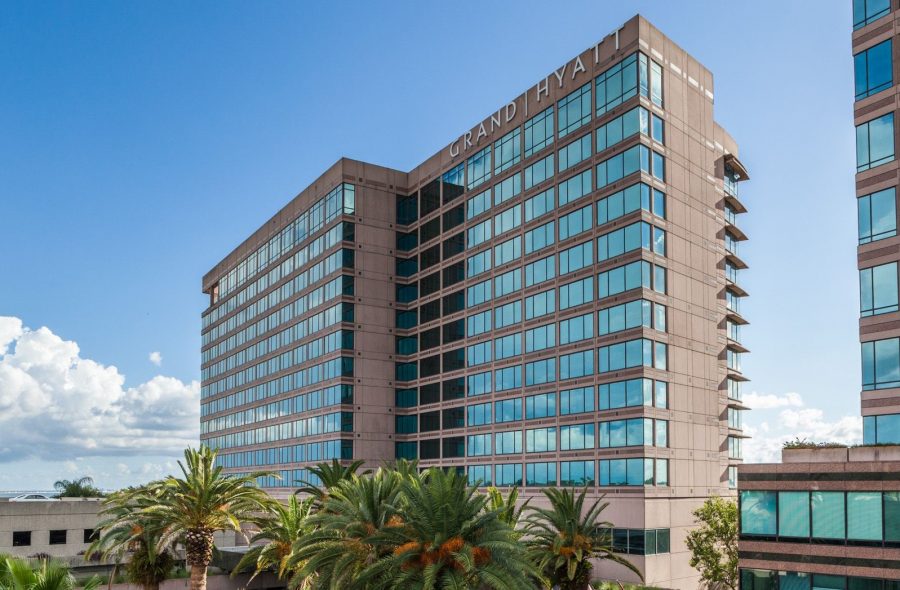 As some of you may know from our summer blogs, our son Jacob is autistic, a type-1 diabetic, has a severe peanut allergy and has suffered from terrible bouts of PTSD-type anxiety attacks which have resulted in visits to A & E.

Norwich City FC is central to his life and his love of all things NCFC have helped him to overcome and come to terms with a number of life’s challenges. He deals with things that most of us take for granted, to make sure he is there for each home and away game.

We came back from Norwich City’s pre-season tour in Germany fired up and ready to go for the next “Jacob challenge”. Jacob had done Eurotunnel and a number of EU countries, so what would be the next step?

Knowing that the team were going to be in Tampa Bay for warm weather training, we wondered whether it might be possible to push Jacob even further? So, we contacted the club to ask if we could attend the training session if we were to book a holiday in Florida travelling independently.

We then got a phone call from the club offering us places as paying guests on the trip. When we were told what was on offer we were slightly stunned, knowing it was too good an opportunity to turn down.

Despite his many worries, “Project Jacob” was launched and with the help of his caregivers, we prepared him for the trip covering all bases as best we could, answering all his questions, so we could keep his anxiety to a minimum. He had only previously been on a flight to Belfast years ago before his anxiety and health issues worsened as they have done in recent years.

Could he manage a ten-hour flight? We haven’t been any further than Germany and none of us had been on a long-haul flight before. What if he had a panic attack on the plane? Surely this would be a step too far for him?

The purpose of this trip to Tampa was to provide the City squad with some warm weather training and much-needed vitamin D during the international break. There is nothing unusual about that – after all, we all remember the antics of the West Brom team in Barcelona two years ago.

However, what made this trip unique was that the squad would be accompanied by a group made up of club partners, competition winners and … us. The idea was to not only make the trip cost neutral through contributions from the paying guests but also to promote the one-club ethos that is so important to the current management team.

We spent much of the journey wondering quite how we had blagged it to travel to Tampa with this elite group. We do have a box in the South Stand, which we use for our work, but we don’t have a stand named after us or have our names printed on the shirt like many of our travel companions. We are, first and foremost, fans.

We were getting to be just as nervous as Jacob, wondering what was ahead and would we fit in. In the end, we needn’t have worried as we had a fantastic group of people who were a pleasure to spend time with.

The club had laid on an evening for all the Tampa guests a few weeks in advance of the tour, and we were split into smaller groups accompanied by one or two NCFC staff acting as tour guides during the trip.

Luckily, we hit it off with all of our group and this eased our nerves considerably, knowing that we would be spending the week with some friendly people. Special mention goes here to Maggie and Colin, competition winners, who were our wonderful companions throughout the trip.

We met up at Carrow Road at stupid o’clock in the morning and piled onto the waiting coach. The coach was comfy, certainly no Club Cabbage antics here and no “Oi, mate that seat’s reserved.” We settled in on the back row for our four-hour trip to Gatwick.

We ploughed through a few traffic jams, which were made easier by Grant Holt – one of the club hosts – who chatted easily with anyone and everyone on the way. The team and senior management set off from Colney and we caught up their coach during one of the traffic jams.

We arrived at Gatwick about 30-minutes later than scheduled and queued at the check-in. Daniel Farke was just in front of us, Tim Krul just behind. We eyed up his really impressive suitcase, which looked like it was from when he played for the Dutch national team.

We were feeling very starstruck but all the team were friendly and relaxed and some chatted to Jacob, who was not at all shy in approaching the players.

Gatwick airport website provides information about a great scheme for those with so-called “hidden disabilities” such as autism. The airport issues a special lanyard which, whilst not specifying the nature of the wearer’s disability, alerts all staff to the fact that they have special needs.

However, we hit our first blip as the staff on duty were unaware of the scheme and the resulting trip through security was a bit of an ordeal for Jacob. Luckily, we had help from NCFC hospitality staff, who did their very best to remedy matters and it was very reassuring to know that they were batting for us.

The flight was smooth and enjoyable and we were pleased to be on a newly-refurbished plane, with a great entertainment system and USB ports. Jacob loved it and to have ten hours of peace with some headphones on just being able to zone out was a great respite for us all – we cannot remember a time when we have had so many hours to just relax and not worry about anything.

It was also exciting for us to have a little trot around the plane, and seeing the players do the same to keep the blood flowing.

The time zones and activity did play havoc with Jacob’s blood sugars, which seemed to plummet at regular intervals, so guzzling US-super style sugary coke was a big feature of his trip.

We arrived at Tampa at about 00:30 UK time, tired but excited. If you haven’t been through US customs before, the process involves placing your passport onto a machine that takes digital fingerprints and photographs, which people were directed towards – a bit like a supermarket self-service checkout.

Unfortunately, the machine that Jacob was asked to use malfunctioned and together with the hustle and bustle of the busy customs area we could see that he was showing signs of a panic attack.

A big thanks to Tampa security, however, who could not have been more understanding and helpful and fast-tracked us through (please take note Gatwick airport). This was the first of many experiences of superb US customer care in action. 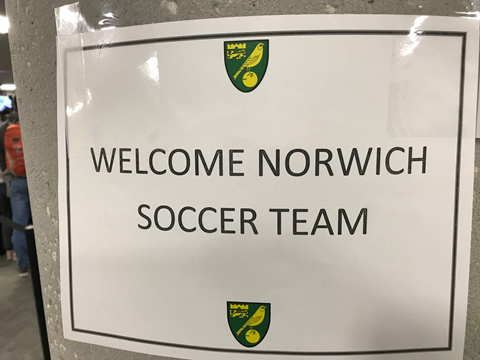 We were greeted by waves of humid heat, like being put under a damp hot hairdryer, and also members of the Visit Tampa Bay team, who laid on a small reception for us at the airport. The change in temperature took some acclimatisation and so the refreshments were more than welcome, even if we were all a little punch drunk and bamboozled from a 17-hour journey.

A couple of lithe cheerleaders sauntered past and we had a laugh about the Aviva Divas (remember them?). An American Norwich fan had come to greet the team too (we would see him later that week at the training session).

We checked in to the Grand Hyatt hotel in Tampa along with the rest of the party. Jacob was a little tearful and overwhelmed, but we hoped a good nights sleep would help. There was a grand dinner laid on for us, but we were in no mood to push our luck, fearing this would lead to a meltdown.

We sadly made our excuses and got an excessively cheesy pizza on room service, and some sleep instead. Luckily he woke up on Tuesday cheerful and raring to go.