The day began with buffet breakfast in the hotel with players and staff everywhere around us. Maggie and Colin, competition winners, filled us in on the dinner the night before. They were on the same table as Stuart Webber and he was really friendly and laid back.

Breakfast US-style is really something. We have sampled enough lousy hotels on the NCFC road for away games and this was a real feast. We would go on to mingle with the staff and players every morning that week, and hear the same mantra: “you want some kwaffee?” from the waitress with the splendid New York drawl.

We were pretty stunned to be sitting with the players and senior staff, and tried our best to look cool and nonchalant (even though we were feeling pretty overawed and starstruck). We would actually get used to being surrounded by them as the week progressed.

After breakfast, we had a few hours to explore and then we were whisked off on the first of many tours around local sports stadia. The NCFC hospitality team and staff were on hand to drive us to all the local attractions and the first on the list was the Amalie Arena, home to the Tampa Bay Lightning ice-hockey team. The stadium is impressive and Jacob was particularly interested in the art displays by local artists which adorn the corridors. 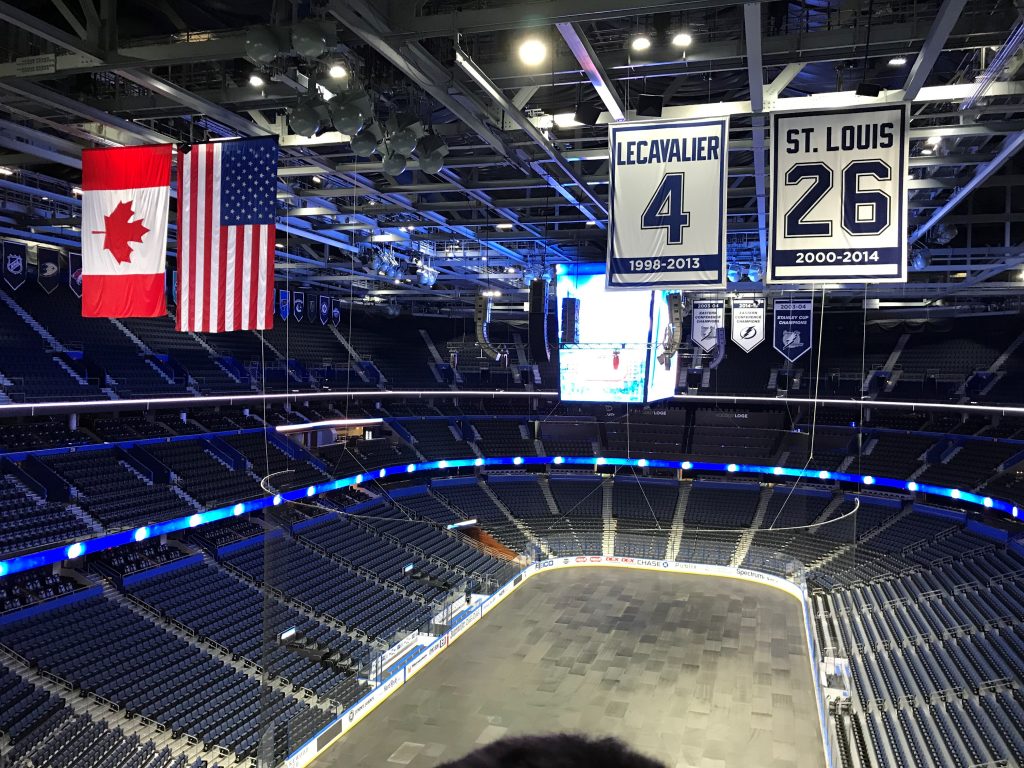 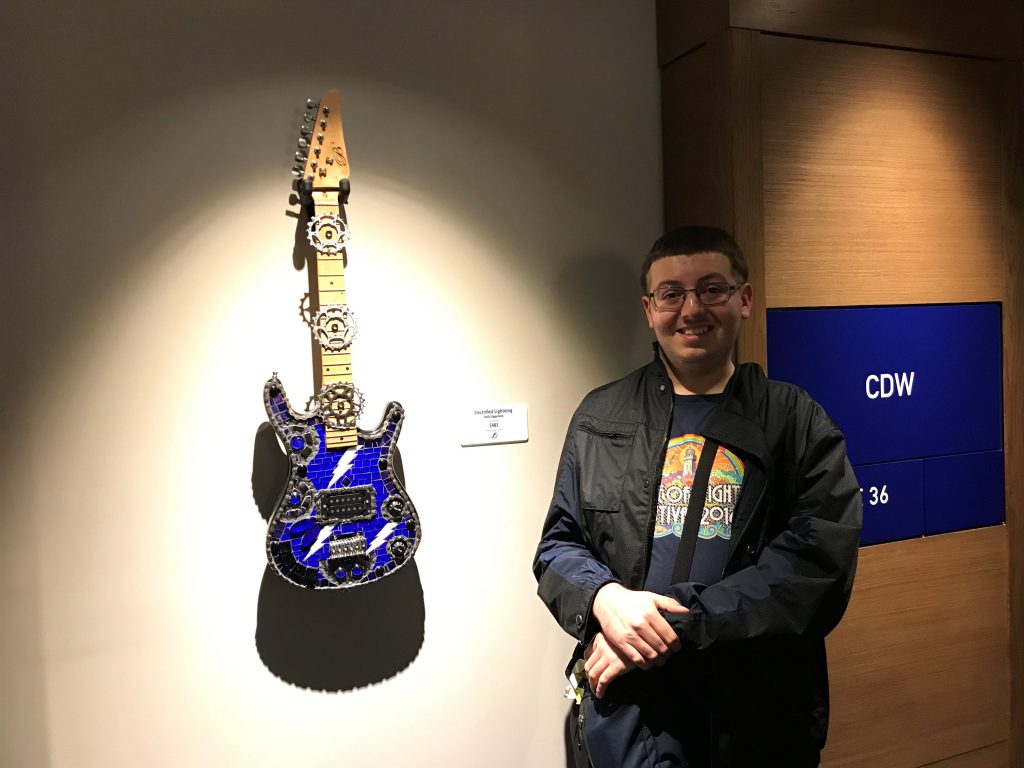 Sporting superstitions normally take the form of lucky pants or routines but like many things in life, Americans like to do things a bit bigger. There is a large lightning logo printed on the carpet in the centre of the home dressing room and from the moment that we arrived at the stadium and throughout the tour we were informed by our hosts that it is considered unlucky for anyone to stand on it.

As we entered the dressing room, the warnings to avoid the logo were increased in tempo and volume to make sure that no-one came even close to walking on it. Apparently, the logo is avoided by the cleaners and no player has ever stepped on it, even when focused on the upcoming game or in the euphoric or tragic aftermath. It simply hasn’t happened ever … but it nearly happened today. 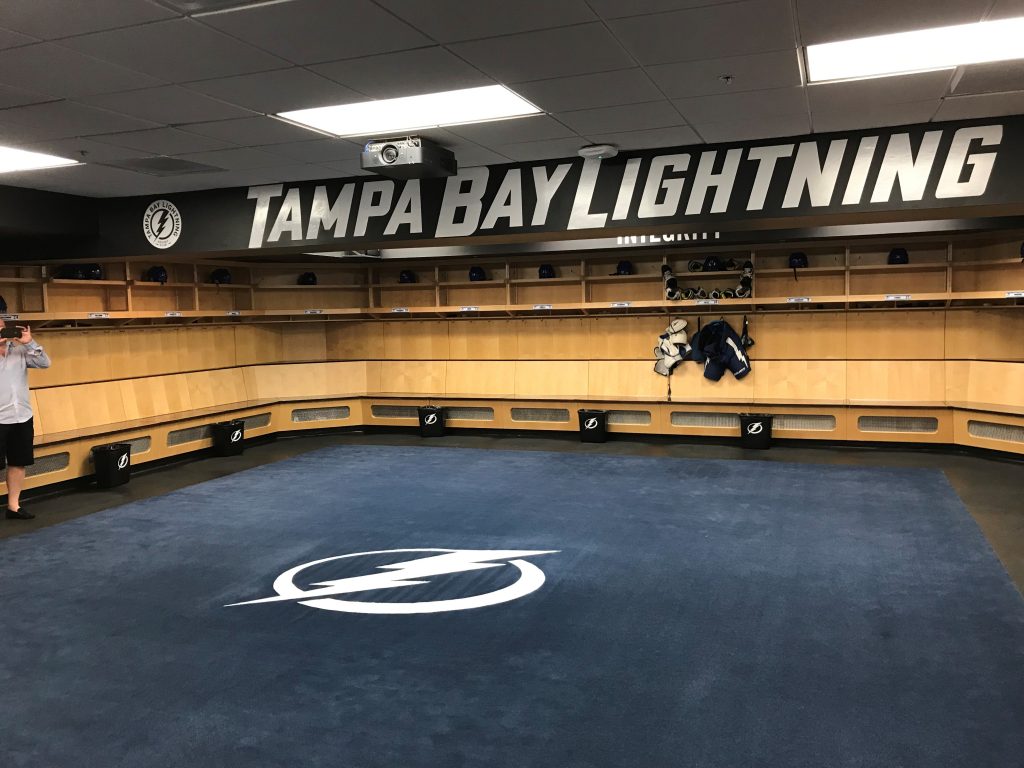 Some of our group arrived late for the tour due to parking problems and missed the warnings about the logo. One person re-joined the rest of the party in the dressing room. In he marched confidently towards the logo stopping just inches short in response to a series of anguished shouts from our hosts.

Diplomatic incident narrowly avoided, we were taken to a boozy reception on the roof garden of the stadium and chatted to our hosts about relegation and away fans, both a bit of a novelty to them as they don’t have either in US ice hockey. We told them that as travelling fans, we hate the way the Premier League treats us. They looked a little incredulous when we said we actually love the competitive nature of the Championship.

That night we were ferried to a lovely restaurant in downtown Tampa, as one of our party had a birthday. We experienced some more of the excellent US customer service as the waitresses took note of our dietary needs and reassured Jacob that every precaution would be taken to ensure that his food was peanut free; it became her personal mission to make sure we had a great peanut-free experience.

It was so great to know that Jacob could eat with confidence and this was a feature throughout the whole trip. The level of customer care in the US is stratospheric. So much so we wondered whether this level of excellent service was driven by the low-wage culture making waiting staff reliant on customer tips, or by the fear of litigation.

Either way, it was a joy to be a recipient of such amazing attention. We remembered the billboards we had seen earlier around Tampa, with great hilarity, such as  “Hire aggressive lawyers” and even the bus with ”www. Get Lawyered Up.com” written on the side (er… not that you can always believe what’s written on the side of a bus, eh?…)

As we waited for our main course, a Twitter message flashed upon our phones from Mr Gowers himself “dare you ask Stuart Webber about Southampton rumours when you have lunch with him?”.

We replied: “wot rumours?” as nothing had been mentioned to us. Gary sent through a link to the Telegraph article. Oh no, surely not, just as things are going so well…. And now THIS?

A quick look around confirmed that Stuart Webber was not with us at the restaurant, he was probably out with the players perhaps, but the media team were on the next table and they all looked pretty relaxed about things. We began to think that perhaps this was a non-story and tried to keep off Twitter and just enjoy ourselves, as some of our mates at home suggested.

When we got back to the hotel we sat in the bar in the lobby, sipping Bud light and reading the posts of NCFC fans at home as they collectively lost their shit. It is amazing how with social media the smallest rumours can take a life of their own and suddenly morph into “fact”, which is taken as gospel by everyone even though it has no basis in reality.

Suddenly the doors opened and in walked Mr Webber, together with a few of the players.

One quite unusual and refreshing feature of people with autism is that they are painfully honest, always tell the truth and pull no punches, and Jacob is no exception.

As Stuart walked towards us, Jacob stood up, thrust out a welcoming hand and blurted out what we all wanted to ask but were too shy to: ‘Hello Mr Webber, are you leaving Norwich to join Southampton?’

Not unsurprisingly, Stuart played a straight bat that Joe Root would have been proud of, but it’s fair to assume that Mr Webber will be with us for the foreseeable future, which is great news for us all.

As a result of his cheeky question, Jacob earned the nickname “Scoop” for his journalistic skills.

Shortly afterwards our small group were treated to a really heartfelt conversation as Jacob greeted Matt Jarvis as he returned to the hotel. Matt came over and chatted with him before talking to us frankly and emotionally about his last two years at Norwich.

He was very open to our questions and said that he had read and appreciated Connor Southwell’s article on MyFootballWriter about his injuries, and the angst, fear and despair that footballers go through when they battle long-term injury.

It wouldn’t be fair to print everything that was said but it left us all with a better appreciation of the struggles that some players go through to keep hold of the career that they love, and how perilous it must feel to know that your livelihood could end at any moment through injury.

Some of the comments on social media directed at Matt were jealous, nasty, unfair and unwarranted. So if you are reading this Matt, we love you, we will be rooting for you and can’t wait to see you back in the yellow shirt.

Love the new kit, Still Working wonders on the self funding model. #NCFC

Do I throw away my #ncfc 2002 goalkeeper shorts? The string has entirely disappeared & so not even wearable so completely useless. But.... they are 20yr old shorts that my grandparents bought me...