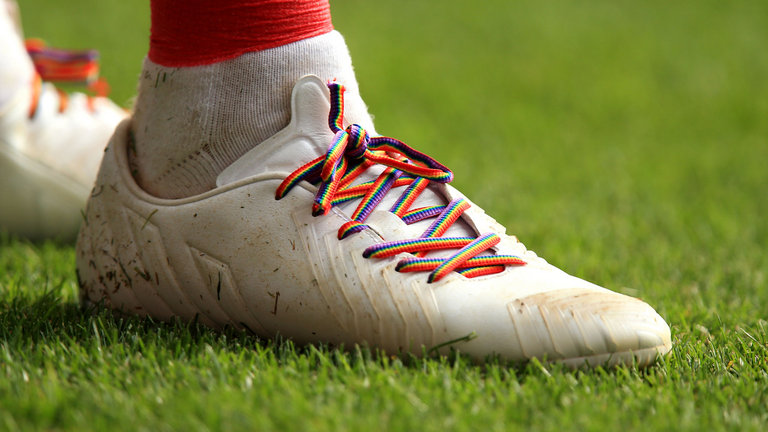 There’s always a risk in broaching a subject which, arguably, you’re ill-placed to pass comment on and one that is as complex and emotive as the issue of prejudice and inclusivity within football.

However, on the back of Ian Wright’s two-part documentary ‘Out of Their Skin’ and Norwich City’s support of the Rainbow Laces campaign, it’s very much front of mind.

As a white, straight, able-bodied man, I haven’t been subjected to any form of prejudicial abuse in my life, and so I can only imagine the hurt, anger and frustration it must cause.

I was called an ‘inbred c***’ by a minibus full of Teessiders, whilst walking away from Wembley, but that was directed at my football shirt and had nothing to do with me as an individual. Nothing to do with my race, sexuality, gender, religion or anything else that I would consider as being part of my core identity.

My relationship with football, in its many guises, has been one of inclusion.

From my playing days, to supporting Norwich City, through to coaching and writing for this website, I have found a sense of belonging and formed close bonds and friendships. Whether it’s hugging relative strangers in the Barclay after a goal, sharing jokes in a dressing room or mingling with the ‘MFW family’ at our annual writer’s breakfast, football can provide the opportunity to break down social barriers and unite people.

But it would be naive and ignorant to assume that my positive experiences are shared by all, simply because I have been sheltered from football’s harsher realities.

A naivety which could be borne out of not experiencing the issues first-hand – if you’ve never been on the sharp end of a problem, then what’s the problem?

A naivety, that may lead some to question the value or purpose of the campaigns and supporters’ groups which champion inclusion and equality.

An ignorance that can lead to a national sports presenter mocking an official’s capability based on gender and dismissing it as “just banter”.

The ignorance of offensive terrace chants that emanate from the relative anonymity and ‘safety’ of a large crowd.

Wright’s documentary focussed on the pioneering role black footballers have played in changing football’s culture and was both up-lifting and harrowing.

Among the contributors was Paul Canoville, the first black player to appear for Chelsea, who described how he was racially abused by his own fans as he prepared to make his debut off the bench at Selhurst Park.

“All that joy in me, that excitement was taken away just like that”.

The programme also highlighted the circumstances behind Cyrille Regis’ International call-up in 1982, which was detailed in his autobiography;

‘Clearly, someone didn’t approve of my selection, because they had cut out individual letters from a newspaper and stuck them on a sheet of paper to spell out a message that read ‘If you put your foot on our Wembley turf, you’ll get one of these through your knees’. I looked back into the envelope and there was a cotton wool pad wrapped around something. I took it out, opened it up, and there it was: a bullet staring up at me.’

Clearly there has been progress since those times and with the increase in players of Black, Asian and Minority Ethnic (BAME) backgrounds throughout the domestic leagues and International squad, players are rarely referred to or identified by their ethnicity.

However, since 2000, whilst the proportion of black footballers playing for England has risen significantly, only 10 per cent have been given a managerial job following retirement, compared to 25 per cent of white players; a statistic that is suggestive of deep-rooted and institutionalised issues within the game.

The ‘Let’s Kick Racism Out of Football’ campaign was established in 1993 as a small independent charity, in response to widespread calls from clubs, players and fans to tackle racist attitudes existing within the game. Kick It Out was then established as a body in 1997 and widened its objectives to cover all aspects of discrimination, inequality and exclusion, including homophobia.

Since our own Justin Fashanu became the first player to publicly come out as gay in 1990, there have been no players in the top flight to follow suit. The only openly gay footballer in the UK, Liam Davis, who currently plays for Cleethorpes, in the 8th tier of English football, shared his views on why, with the BBC;

“There are lots of things to consider, the media, agents, tens of thousands of opposition fans – so I can understand why people would be worried about it.”

A survey carried out in 2016, found that 72 per cent of football fans had heard homophobic abuse while watching live sports in the past five years. More worrying is the fact that this represented an increase on a similar survey conducted in 2009.

But it would be wrong to suggest that this is solely ‘football’s problem’.

Football’s culture is a microcosm of the wider societal culture and a lens through which to view underlying values and beliefs.

Whilst society has changed what is widely deemed acceptable to say and how to act, the concern must be that certain fundamental beliefs remain ingrained.

Beliefs that are largely held in check (by what some consider to be ‘political correctness, gone mad’), but which are seemingly being expressed in ever increasing environments, including sport.

Genuine and sustainable change will only be brought about by addressing those beliefs.

And therein lies the real value of Kick It Out, Rainbow Laces and documentaries such as Out of Their Skin.

Not to prescribe or define what is considered to be acceptable, but to raise awareness of the issues; to challenge thinking; to educate; and ultimately, to make the game we love, genuinely accessible to all.