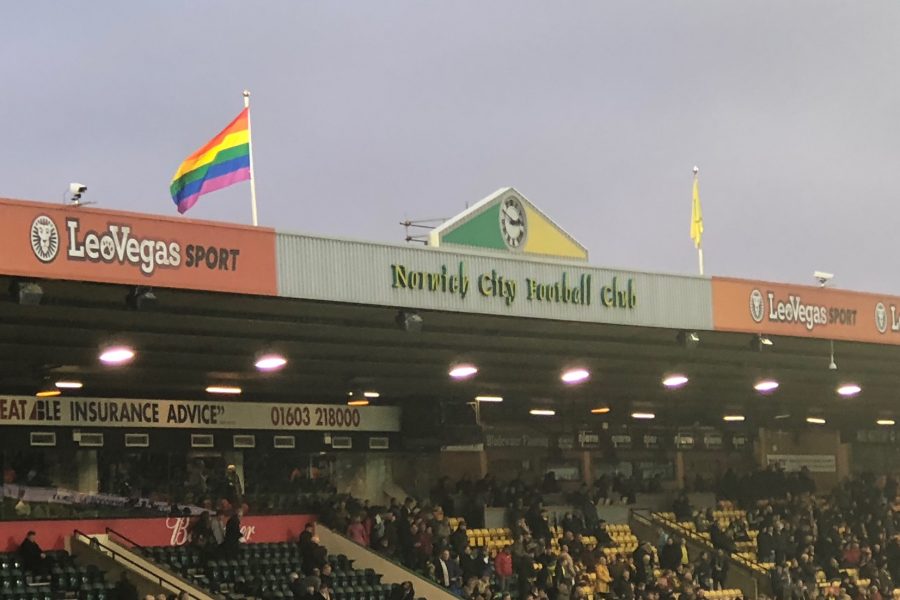 For those that don’t tweet, you missed a gem from one of our own last night.

Chris Sutton, the Lewis/Aarons/Cantwell of his day here at Carrow Road, reminded Suffolk’s finest that, as things stand, City have more wins than they have points.

Typically, it wasn’t well received south of the border (why would it be?), but it did bring home just how far our respective paths have diverged since that grey Ipswich afternoon at the beginning of September.

Had our friends in blue won that game – they led 1-0 remember – they would have leap-frogged us in the table. Just imagine what the fallout would have been at either end of the A140.

With my usual razor-sharp perception, I concluded my post-match piece with… ‘we must also accept that what was once a gulf in quality between City and our Suffolk brethren is now a mere sliver’.

But I genuinely didn’t see it coming. Yes, we were ecstatic that Mo popped up with his first City goal at the most opportune moment possible and, yes, one team tried to shift the ball on the green stuff while other used muscle and the ether, but in terms of end result there was nothing to choose between them.

Yet, looking back, it really was Mo’s strike through that crowded penalty area that turned this season on its head, even though it was still in its embryonic stages.

An unthinkable defeat, and the Carrow Road mood prior to the next game, against Boro, would have been decidedly frosty – Daniel Farke would have quickly discovered how poorly Portman Road defeats are received.

But how times have changed.

Now we have the head coach being serenaded by the Barclay, with him leading their post-match celebrations; a finer picture of club togetherness you’re rarely likely to see.

What has become clear during this incredible unbeaten run is that the team is still evolving, still learning and are still discovering new ways to dig out a result. This is not the finished article by a long shot, with plenty of areas still being worked on and refined.

While a few scoffed at only drawing at Hull in midweek, there was something very ‘Championship’ about how, on a difficult, squally night, they battended down the hatches and made sure they came home with at least a point.

And yesterday, against a well-organised Rotherham side who were on a not dissimilar run of form to our own, they again found a way. At times the football was verging on the beautiful but for long spells of the first half, it was tough going.

A goal behind and minus the magic of Mo, the passing did slip back into the ‘too slow’ category, and we did struggle to find our way around or through the Millers’ banks of four and five. We also looked vulnerable to the sporadic counter-attacks that Paul Warne had clearly earmarked as key.

Their goal, while perceived by some as a goalkeeping error, was for me as much about the laboured reactions of the defenders, plus the small matter of it being offside (apparently).

I get that some are unhappy with the “errors” from Tim Krul and want him replaced, but I think that ignores the impact he has on not just the back-four, but the whole team, and also the way he organises. To take the Dutchman out and plonk another keeper in, would remove more than just a bloke who’s there to stop shots (my tin hat is by my side).

Going a goal down doesn’t phase this team one iota. Such is their undiluted belief in the method, the system and each other, they believe that if they keep doing the right things the chances will come. And, equally, they know – or at least believe – they are fitter than the rest, and those chances will naturally present themselves late on if they are patient enough.

The second half saw the game plan executed better than it was in the first, with the ball being shifted a milli-second quicker and the intensity level cranked up a notch – and the Millers found it hard to cope with.

Todd Cantwell’s first goal in a first XI shirt was just reward for another industrious afternoon, and as he blossoms before our very eyes, he too is revealing aspects to his game that many of us are seeing for the first time. I’m talking of course about that exquisitely, clipped ball onto the head of Max Aarons for the second goal – a pass that would have had Lineker and co drooling if it had been played by David Silva.

And now it’s Onel Hernandez who, when fit, will have to await his chance.

Aarons of course, like Jamal Lewis, just goes from strength to strength and in addition to his terrier-like defending and perfect positioning when tending to his defensive duties, he’s equally comfortable when high up the pitch and operating as an out-and-out winger. What a prospect he is – and now he scores goals.

The clincher, of course, gave Teemu Pukki his customary Carrow Road goal but was all about the team’s unsung hero.

But, what he does is fit perfectly into Farke’s system by using his footballing intelligence to drift into space, by taking some of the physical burden off Pukki (and Rhodes) and by being the one to knit all together with his comfort in taking the ball in tight situations and making simple passes.

He’s not everyone’s cup of tea, but I’d argue he’s one of the first names on the team-sheet. This system needs him.

The scenes at the end – mainly in front of the Barclay  😉 – were reminiscent of those of the Worthington and Lambert campaigns that ended in triumph, and there is something building. The Norwich supporter in me is still loathe to look too far ahead – a blip awaits – but there does feel something special in the air.

Just don’t ask me to dream – not quite yet.