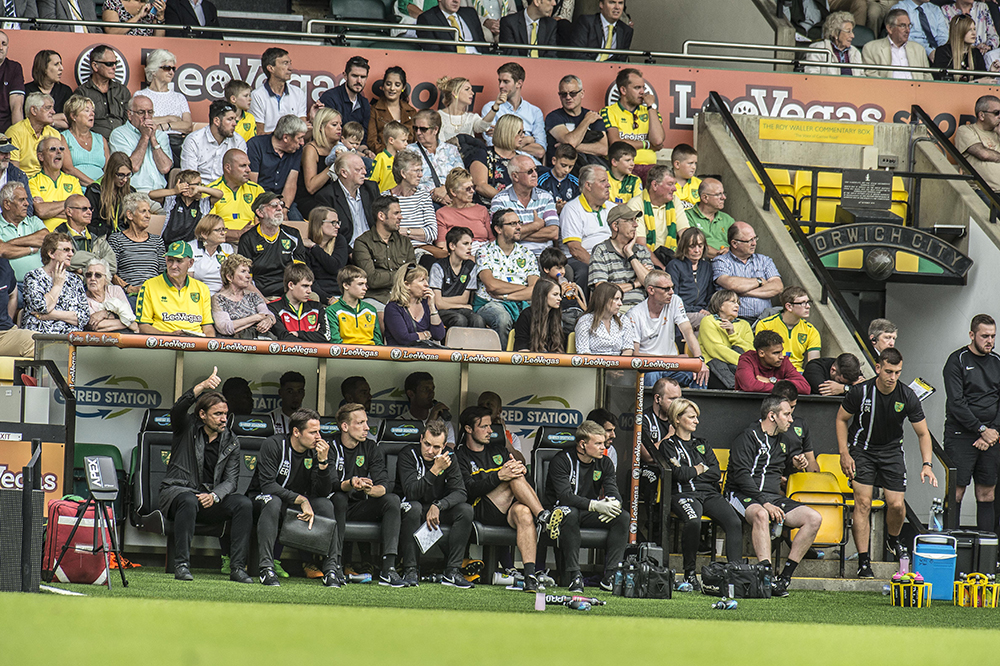 When the Championship season draws to a close and the mandatory post-campaign reflection begins, it looks likely that the nature of that debate will hinge upon Norwich City’s fortunes over the next two months.

What Daniel Farke and his side have achieved so far has been nothing short of extraordinary. As is well-documented, Farke and Stuart Webber have successfully sought to implement a more potent, penetrative style of football with an acutely-diminished wage bill and a subsequent plethora of young talent.

The fact that City sit top of the pile in mid-December remains utterly baffling.

But the real hard work is yet to begin. Yes, Farke’s team have shown a remarkable degree of spirit, unity and resilience in their opening 21 games, and yes, they are showing no visible signs of relinquishing such form, but the reality is that the period between now and February 2 looks set to determine their destiny.

Blackburn, Nottingham Forest, Derby, West Brom, Sheffield United and Leeds all await within the space of City’s next nine matches, six teams who have all enjoyed an impressive first half of the season and who all represent daunting opposition for our heroes in yellow and green.

The footballing festivities witness the visits of a lurking Forest and a dangerous Derby. The prospect of a probably-televised trip to Elland Road in under two months’ time does as much to raise the heart rate as it does tingle the spine.

But these are exciting times for City. Times in which our players can make a genuine statement, demonstrating that their ascent to the division’s summit has been less the product of good fortune as it has the result of real footballing quality.

Times in which City have the opportunity to extend their lead at the top, defeating their immediate rivals and augmenting the gap between themselves and those in the play-off places. Times in which legacies and long-standing stories of heroism can be forged.

Can they do it? Well, it’s going to be fascinating. I’m sure all of us who have seen even a handful of City’s performances since that game against Middlesbrough on September 15 can agree that if Farke’s players adhere to their aesthetic football principles, stay united and keep the faith then they can.

However, what remains an area of concern is the relative inexperience of this side, a group of players that represent the antithesis of the squad we saw in 2014/15 and a group who have yet to really prove their psychological resolve on a long-term scale.

But on the evidence so far, there is genuine reason for excitement. These players have proven their ardent inability to ever give up on no fewer than five occasions so far, coming from behind to clinch historic victories from the jaws of defeat.

Forest, Aston Villa, Millwall, Rotherham and – most recently – Bolton will all be able to testify, all victims of the astonishing level of belief in this team that has raised the decibel levels within Carrow Road to near-deafening twice during the past four weeks.

Yet this brilliant, lovable, joyous young side still have their critics. Look no further than the lunacy propagated by talkSPORT’s Ian Abrahams this week concerning our absence of an English manager, or the ill-researched and fundamentally invalid comments from Leeds supporters on Twitter regarding the ostensible absence of depth in our squad. Mario Vrancic, Grant Hanley, Jordan Rhodes and co all wait in the wings. Too thin a squad? Nonsense.

And those who have been confined to City’s bench may well get their opportunity over the coming weeks. With the footballing calendar becoming increasingly saturated as winter progresses, Farke and his coaching team must show the dexterity and intelligence our current politicians so severely lack to intelligently rotate their squad.

Injuries and fatigue are inevitable. It is City’s management of this misfortune and ability to adapt that will function as crucial as the following weeks unfold.

The trip to Ashton Gate on Saturday afternoon is no easy proposition, either. As events at the KCOM delineated at the end of last month, there are no simple games in this division, a stalemate albeit affected by the absence of Moritz Leitner but one that owed a considerable amount to Hull’s defensive resolve.

With the Bristol City game now being televised under the lights, the eyes of the nation shall be on our City to see if they truly are the real deal.

But I for one, it must be said, believe they are. Call me a romantic (you’re a romantic – Ed), but it really does seem that the narrative of recent weeks has simply been too exhilarating, too perfectly-constructed, too poetic, to not represent a component of a history-making season.

Whatever happens next is going to be compelling. Whether this group of young heroes fold, falter or flourish in the face of a gruelling winter campaign, one thing is for certain: I can’t wait.