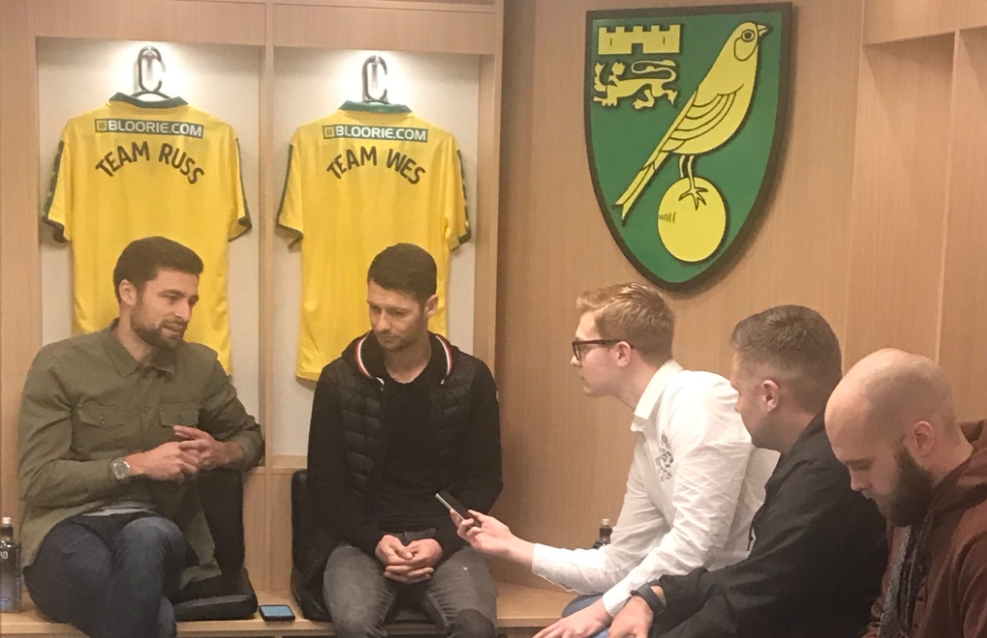 As Russell Martin re-entered the Norwich City dressing room for the first time since his departure last summer, his first act was to hang up his coat on the peg that used to be his.

For the former City captain, the interior of the dressing room has been upgraded but so too has the internal workings of the football club. When Martin signed for the Canaries in 2009, initially on loan, he entered a football club on its knees. Restoring pride and ensuring the football club returned to the position it expected were the remit of the staff and players.

Martin went on to play over 300 games donning the yellow and green, becoming a legend in the process and being the constant among change throughout his time at the club.

Unlike Wes – who was sat beside him – Russ wasn’t provided with the opportunity to formally close his City chapter. After nine and a half years of dedicated service, Martin is looking ahead to May’s celebration game and sharing the moment with the supporters who have been pivotal to his affiance with the club.

‘Doing it with Wes makes it that much better really and easier probably. I’m really looking forward to it.

‘Obviously I left late on Deadline Day and only got to say goodbye to a few of the staff and the boys. It’ll be special for me and the family. I haven’t been back yet to a game or anything, even to be back now is pretty surreal even though it’s not been that long, it feels like a lifetime in football. It’ll be a brilliant day and my little boys are so excited for it already’.

Martin’s character off the pitch merely reinforces his rightful label of being a legend.

He breaks the mould of stereotypical footballing personalities. With Martin, there is no ego or greed, he has a genuine care for everyone and responds to every question posed with articulation and intellect.

Alongside his footballing achievements, his constant presence in supporting the Community Sports Foundation has aided their projects and provided children of all ages with memories to last a life time.

Russ encapsulates everything supporters want from their footballers: gratitude for being granted the opportunity, engagement with the supporters and always wearing his heart on his sleeve. Despite criticism for on-field performances, it was always Martin who placed his head above the parapet and refused to shirk the difficult questions.

‘It’ll be a great opportunity for me to say thank you to a lot of people.

‘The biggest thing for us is saying thank you to everyone who played such a big part in what we had here. It’s not very often you get to spend that long at one club, especially not such a good football club and build that affinity with the place.

‘All of our kids were born here. To say thank you to the fans, ex-teammates who played a big part in it and the staff. There will be a lot of staff coming back, so it’s the whole package for us really and it’ll be a special day. If it happens with the team being successful as well, then it will be a tremendous couple of days.’

Ultimately, supporters will remember Martin for all of the good. That swashbuckling right back, reliable and solid who contributed to the offensive endeavour displayed consistently by that class of 2011.

His adaptation to centre-back was divisive. Few failed to understand the rationale behind it and debate about whether that decision was correct or not is now redundant. One thing that never changed was the emotion and commitment with which he played.

Few recall the games Martin operated as a centre back under Paul Lambert or at Wembley, where he kept a clean sheet alongside Seb Bassong in that 2-0 win. A day that Russ pinpoints as his greatest in a yellow and green shirt.

‘As a day, Wembley (stands out) but as a season, I’d say the first one. It pops up on Sky Sports every so often doesn’t it?’

For Martin, his brief has changed, the transition from player into supporter is well underway.

Pitches will be exchanged for terraces, but on May 6, 2019 he will get to bid farewell in a more positive and less pressurised backdrop.

His last formal City appearance was the crushing 4-0 defeat to Millwall and that mustn’t overshadow the unwavering commitment and quality Martin displayed on so many occasions. When the team was underperforming, his honesty was refreshing, and the supporters could take reassurance that he would relay what it meant to play to Norwich to those not pulling their weight.

By appearing on the TalkNorwichCity podcast, Martin pushed the boundaries between players and fans to an unprecedented proximity that would make many players shudder. Transparency was always integral to how he conducted himself.

‘For me, it’s not the end of the chapter because it’s done now. We’ll always be back in some form, whether that be watching or working eventually for the club. Just to have that day to say, that’s us as players, thank you very much and that’s us done and from now on we’ll be one of you lot and supporting and stuff and we’ll see what goes from there’.

He was an integral part behind the scenes last season and admits the youthful exuberance of the side is impressing him.

‘I’m delighted for them. The young lads have added a whole new dimension and brought loads of energy and I think that’s the biggest difference to last year. I think everyone will be honest and say they are quite surprised that they are on the run they are but having watched them over the last couple of weeks, which I have watched them back, they’ve been brilliant.

‘It’s no surprise now, but if you’d said at the start of the season, I think a few people would be quite surprised but now they are up there, they deserve to be. I watched the Rotherham game, I was ill last week and watched that and apart from the first few minutes they were excellent, and it could have been six or seven in the end.

‘They’re doing that regularly to teams and scoring late goals. Once you get that energy and that belief, it’s hard to stop.’

Wes may bring the technique and quality, but Russ’s contributions to the football club allowed operators like the little Irishman to cast their magical spell over proceedings.

When recollecting over past legends, Grant Holt’s legacy will always be cherished and so will Hoolahan’s, but Martin’s doesn’t contain a transfer request or spat to tarnish the memories.

From playing through illness to that memorable and emotional tribute to Peter Oldfield, Russell Martin understood what it meant to play for Norwich City, and a celebration of his Norwich career is a well-deserved commemoration of the tireless hours he dedicated to this football club.

The match will take place on Bank Holiday Monday, May 6, at Carrow Road (kick-off 3pm), irrespective of City’s final league position and any play-off involvement.

Tickets and hospitality will go on sale from 9am on Tuesday, December 11, initially for the South Stand and City Stand. Tickets can be purchased via ticket.canaries.co.uk, by calling 01603 721902 or by visiting the ticket office at Carrow Road or Chapelfield.

General admission tickets will be priced as follows:

Wes and Russ will visit the lounges pre-match.