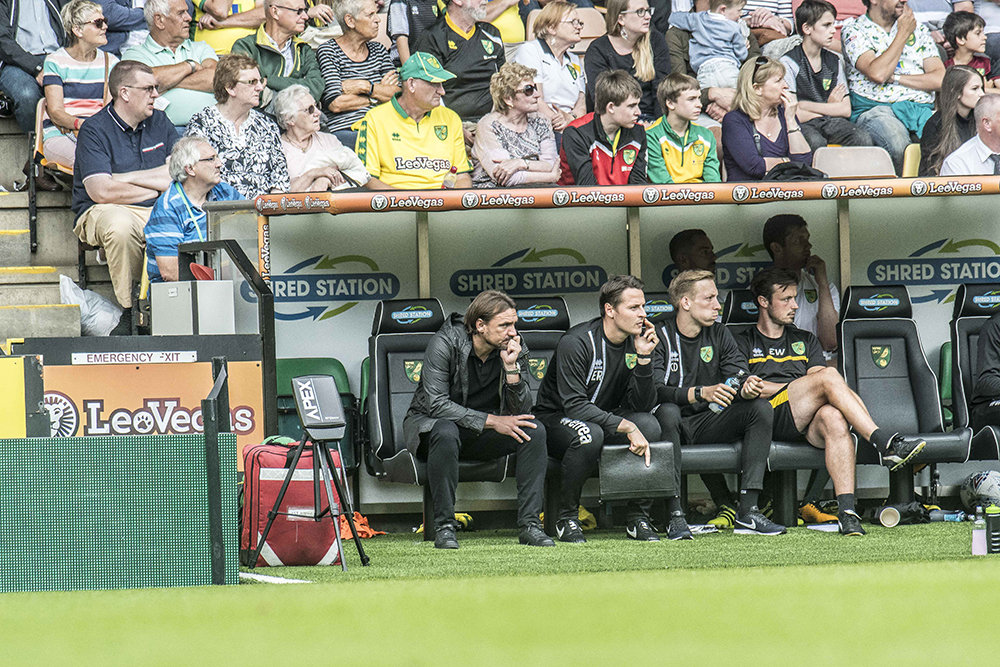 “They’re a likeable club with a likeable manager and we should wish them well for the next round and in their promotion charge.”

Thus wrote MFW editor Gary yesterday and with no hint of toadying he hit the nail on the head. I couldn’t agree more.

Getting the 28 bus to Tombland en route to the ground I coincidentally sat in front of a Norwich-based Portsmouth fan and his teenage son. I was aware of their presence when I felt a tug on my scarf – when I turned around in a bemused fashion I noted their colours and we had a great chat which lasted the whole of the journey.

In Morrisons, the conversation between the Yellows and the Blues (albeit in the long queue for the gents) was banter at its best.

Number one son lives and works in Portsmouth and told me that their bare-chested drummer is quite a local celebrity and has featured several times in the Portsmouth News. A bit like our own Canary Fairy, who (fortunately) appears to have hung up his wand.

Josh sometimes goes to Fratton Park and always tells me how friendly their supporters are, despite his obvious Norfolk background. He doesn’t wear their colours but likes to go to the occasional game.

So back to the nitty-gritty and Hanleygate. In real time, the Barclay were furious at referee Darren Bond for his decision – that red card came out a little too quickly for my liking – however, seeing the highlights on Match of the Day it quickly became clear that Grant Hanley was the last man and what can only be described as a body check was the acme of professional fouls.

But at 14 minutes in? Many referees would have settled for a yellow and a severe bo!!ocking at that stage of the game. It was not to work out that way.

To me that decision spoiled the game because I was so looking forward to seeing how our “change players” would function within an eleven-man unit. As it goes, we did pretty well with ten.

As Hanley appeared to try to get the ball and there was no suggestion of serious foul play it should just be a one-match ban.

Daniel Farke went for $hit or bust at the end when he sent on Pukki and Hernandez and it nearly paid off. Todd Cantwell’s flying header produced a marvellous save from the Pompey keeper and deep into stoppage time their move on the break – one of the best crossfield balls I’ve ever seen included – led to a lucky ricochet from a block which Andre Green despatched via the post.

No blame to Michael McGovern.

Most of the time you wouldn’t realise we had only ten men on the field unless you’d been there and well done to all concerned.

However we escaped the dreaded replay.

Issues? Felix Passlack looks vulnerable in the air and the Borussia Dortmund lad was understandably rusty, as was Kenny McLean. But neither looked out of place and this bodes well for the next few months. Dennis Srbeny is not for me I’m afraid. Ivo Pinto bench bound – he’s on his way, to be sure.

Oh well, we’re out of the FA Cup in the third round yet again. It’s gone, and we will get over it.

To end, huge praise for the Norwich City ticket office. I didn’t know if I would be able to make the game until the Saturday morning and as a season ticket holder I’ve not had contact with the office in many years – no need to, really.

But I phoned up for a ticket, gave my supporter number, had a laugh with the guy on the other end of the phone, paid and my ticket was waiting for me at the collection point, where I just showed my email confirmation and had another pleasant chat with the bloke who handed over the ticket-containing envelope. Terrific service.

Instead of Mind the Gap, I’ll end with well done Accrington Stanley.

PS. Todd – it was about time you got a decent haircut 🙂