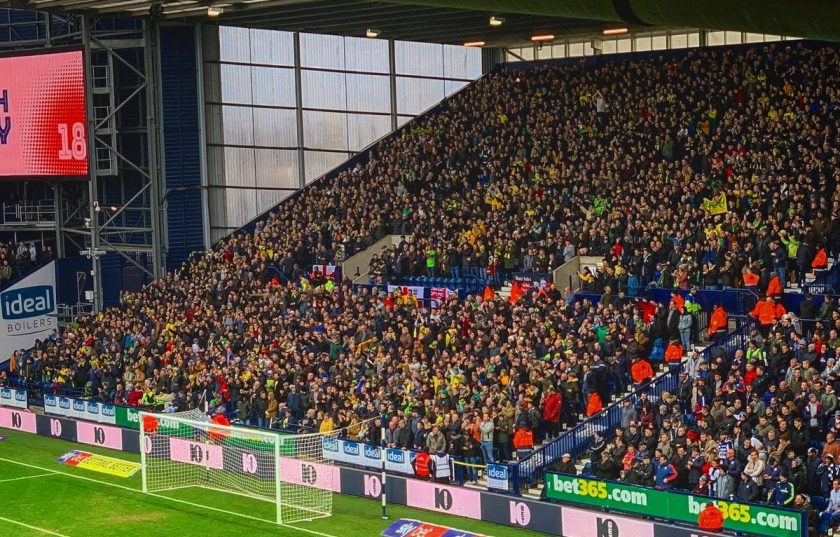 In the week leading up to the Baggies’ game, I spent most of my spare time trawling social media for two spare tickets, along with a large proportion of our fan base, which was unbelievable considering tickets went on general sale and didn’t sell out particularly quickly.

Suddenly though, WBA v City was the go-to away trip and tickets became more sought after than Willy Wonker’s gold one.

Was it the fact it was a top of the table clash? A ground that’s fairly easy to get to? Maybe it was just the lure of a Chicken Tikka and a pint at The Vine? Perhaps all three played their part.

After securing the two extra tickets, the passenger load in my family hatchback went up from three to five; the only positive being as I’m vertically challenged, whoever sat behind me had more leg room!

We set off at 9.30 with two Vine virgins aboard and while we were all looking forward to the curry, we were feeling less positive about the game. We talked Wes, Harvey Barnes and, randomly, Karanka’s departure from Forest.

We arrived at The Vine at 12.30. It was already packed and a sea of yellow (the West Brom fans were mainly in yellow also!) and we were lucky enough to spot someone leaving. We secured a table and prepared to queue.

The amount of City fans at the venue made it feel more like a home game; so many familiar faces all together in one place but it was an away day. It was clearly a game of importance and while we were all enjoying tucking into our food and passing pleasantries with fellow fans, the consensus was we would be happy with a draw.

With full bellies, we braved the winds and made our way to the ground, following the home fans on a so-called short cut down a train track. After dodging a train, we crossed the line to the Hawthorns where we all went our separate ways, given the fact of buying tickets from different people and sources.

I expected a big atmosphere with an away following of 2700+ but in the area my son and I were in, it wasn’t to be. A few tried to start a few songs but there was an air of tension and nerves and the chants fell flat.

I was pleased to hear Jamal and Emi were back in the team but neither (understandably) seemed not to be at peak fitness and West Brom identified those weaknesses early on and capitalised with that Gayle goal.

This did nothing to help the jitters and the frustrations around and, as Krul kicked another ball wide to Max that again sailed over his head out for an opposition throw in, the pressure was piled on even more. I could hear mutterings…

“It’s not going to be our day”

“Can’t see us getting anything here”.

Plus some unhelpful negatives about individuals, which I refuse to repeat.

The half-time opinions were similar…

Luckily, City made a better start to the second-half – as they so often do. Football is a game of two halves, and we have proved that so far this season.

West Brom weren’t rolling over though and being a strong attacking team, City found it tough going and couldn’t seem to find their tempo. Tim Krul’s kicking may had been off but he’d kept the score line down to just that one goal with two great saves, which still gave us that glimmer of hope.

Daniel’s decision to bring on another striker was a positive move and Dennis Srbeny definitely looked up for it, turning the West Brom defenders with almost his first touch and driving forward. The crowd around me suddenly found a voice around. This is what we needed – a change of tactics and formation.

Although the tempo gained a few notches, both on and off the pitch, it still felt like a game that was slowly slipping away. Murmurings in the crowd started – Sheffield Utd were 1-0 up, with the current standings we had dropped to 4th position – but out of the corner of my eye I spotted Daniel making a double substitution…

‘Is he bringing off TEEMU? Surely not!’

’That’s Rhodes and McClean, we already have 2 strikers on the field…’

‘Go on Daniel, let’s go for it, all or bust, nothing to lose, throw it all in the mixer’

‘We’re not creating chances to bring on Rhodes! Why?’

Just two minutes later and there was noise, a lot of noise. Jordan Rhodes had done exactly what he’s best at doing. The fans were doing exactly what they are best at too.

I’d been shunted sideways, hugged by someone who had joined our row from two rows behind, my glasses had ended up on the back of my head and we sang… oh we sang…

A hard earned point and, more so, two points taken from the opposition. Well battled in the end and as away days go this turned out to be a bloody good one.

However, as fans we want so much from our team. It’s great to have high expectations but is there a need to lambast players or individuals who make mistakes? Even before the game has even finished, talk of sacking the manager, the team being written off.

Please let’s have some perspective of where we are.

We have seen City play some of their best football this season and lose (Derby and Stoke at home), we have seen passing, possession football with goals of sheer beauty which if scored by Guardiola’s City, the pundits would have been analysing every move.

We’ve also had last minute thrillers, we’ve been the ‘comeback kings’, we’ve been the ‘under the radar team’. And we’ve got flags in abundance, our scarves are out for the boys, so why are we so quick to bemoan and find a scapegoat within our squad?

Can you believe we’ve only just actually passed the halfway mark of the season and so much has already happened! But we need to keep this momentum and to stay positive, just like our team did on Saturday.

We are the 12th man and just like our subs, we too have got to be up for the fight. We can’t give up. We wouldn’t expect our team to give up at the 80th minute or on 90+4, so neither should we.

We need to start supporting from the first minute to the last. We are all supporters, whether we go to one game or all, home or away, sit, stand, or listen on a radio in comfort.

Remember it’s a marathon, not a sprint, with a fair few hurdles chucked in along the way.

So, bring on the rest of the season. Let’s give it our best shot and enjoy!

[Thanks to Rob Butler and BBC Radio Norfolk for granting MFW permission to use the headline image].